Every year, more and more CMOs embark on an annual pilgrimage to Cannes, forming a motley crew of Madmen and Madwomen that line the Croisette. I myself have been making the trip to Cannes Lions since its earliest beginnings, and still it surprises me that there are so few women in senior roles represented on such a global stage.

The reported figures for women among the creative ranks have seen a significant drop in the last few years and those climbing the ladder are even fewer. In fact worldwide, it’s estimated that less than 25% of agency creatives are female and just 3% are creative directors.

It’s been 20 years since I took my first tentative steps into the digital media industry – setting up netguide.live, the Internet’s very first daily guide. After launching CMP Media European licensing business, I took on an even more ambitious and challenging role as the UK MD at AltaVista, a company that was eventually taken over by Yahoo! These early opportunities cemented my love of media and tech and opened up the opportunity for me to join Outbrain.

A path less travelled
I have been fortunate enough to find a career path that I am passionate about in an area that I have become increasingly knowledgeable in. That it is in an industry that continues to advance and grow makes me extremely privileged. When I set out on my journey, I had a clear vision of what I wanted to achieve and this clarity of vision has allowed me to focus on and attain my goals despite any concern for gender stereotypes. However, as I delved into the schedule for the week ahead and began to explore some of the shortlisted work, I was not surprised to see that gender is once again a hot topic in Cannes. This year’s agenda was packed to the rafters with meet-ups, breakfasts, and events celebrating talented and creative women. You can also see a very visible shift in the amount of work geared towards transforming how we think about global gender issues and the subjects of gender disparity and identity. 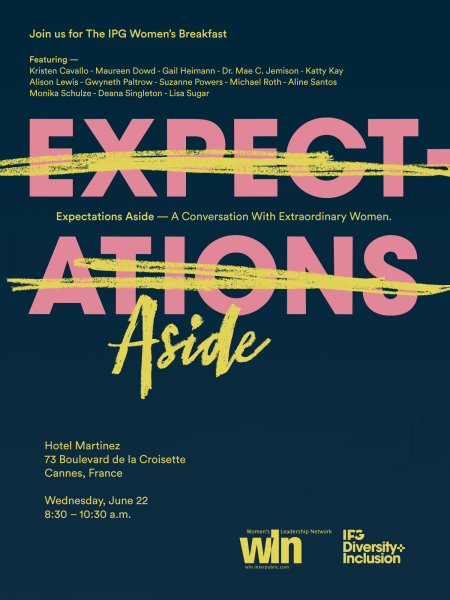 On Wednesday June 22, as delegates from across the globe continued to pour into a balmy Cannes, I took my place at IPG’s Women’s Breakfast, this year titled: “A conversation with extraordinary women.” The discussions explored, among other things, how to reach women in an authentic way, building confidence and leading people. We journeyed through space (courtesy of Dr. Mae Jemison), time and politics and took a moment to celebrate a year of remarkable women with Gail Heimann. I left feeling invigorated.

Halfway through this year’s event as I write and so far it’s been a week that has challenged traditional and outdated thinking. In fact it’s led to some bold statements from the likes of Unilever CMO, Keith Weed, who has publicly vowed to drop sexist stereotypes from its campaigns for Dove, Lynx and Sunsilk and to overhaul its global strategy following research that suggests just 2% of ads show intelligent women. He is now on a mission to change the way women are portrayed in advertising.

I love the sentiment and believe these are positive steps, but given all the time, effort and investment that goes into research, gathering insights, analysing and targeting it’s been surprising to me to see so many companies and individuals questioning the output of their creative campaigns.

A sea change
This year, Cannes Lions announced that 40% of the 387 people selected to be jurors would be women, a significant increase on last year’s 31.5% and a record number for the Festival. I’m not much of a conspiracy theorist, but looking at the Glass Lions entries and ultimate winners, there is certainly a lot of gender-focused work that has started to breakthrough this year and earn recognition. Could it be the female factor?

One that caught my eye was the transgender acceptance campaign for Hindustan Unilever tea brand, Brooke Bond Red Label. A category introduced last year to celebrate work that addresses and seeks to have positive impact on gender inequality, imbalance or injustice, Mindshare Mumbai’s campaign featured transgender pop group the “6 Pack Band.” It was great to see them pick up a Glass Lions Grand Prix award for it.

Cannes Lions has also continued its successful ‘See It Be It’ initiative, which is designed to support and develop the industry’s underrepresented female creatives and this year, announced its first ambassador as Sarah Watson, chief strategy officer of BBH New York.

Inspired networking
I’ve also been pleased to see ‘The Girls Lounge’ back in full swing and better than ever with many lively debates from woman representing the gamut of marketing, media, advertising and technology. In fact, I’ve found myself in the company of nothing but extraordinary women since arriving in Cannes.

In my experience, building a network of smart and talented people has not only helped me perform in my day-to-day role, but has also often sparked my curiosity for new discoveries, helping me effectively navigate my career. Making connections that inspire you, even at the earliest stages of a career path, can open a number of doors that specialist knowledge and skills alone cannot: never underestimate the importance of business contacts and colleagues blazing a trail. You never know if they’ll be the ones to interview you in the future, or be critical to the future of your industry.

Let’s take inspiration from this year’s Cannes, and in the words of Anna Wintour: “Aim higher, dare to be different, use all your gold and make interesting friends.” ‪ 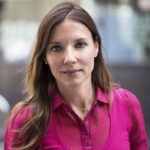 Stephanie Himoff is the Managing Director, Northern Europe at Outbrain (@Outbrain). She is responsible for the strategic direction, business intelligence and sales operations of this leading content marketing and discovery platform. Prior to joining Outbrain Stephanie worked as the VP of Sales and Business Development at Demand Media and has a wide range of experience in working with innovative digital start-ups and world leading technology companies.