Since January 2017, we’ve watched with interest as traffic from Google Search to publisher sites globally has risen by more than 25%, more than outpacing the much-publicized decline in Facebook referrals over the same time period.  We’ve spent some time digging into our data and today, we conclude that this is driven by a 100% increase in mobile search traffic from Google on sites using Accelerated Mobile Pages (“AMP”).

Below is Chartbeat’s early analysis of the trend, why it’s a good thing for publishers, and some initial recommendations on how to take advantage of this growth.

Google Search has always been the largest referrer to Chartbeat clients, who represent a large majority of leading news media sites in the U.S. and globally.  From January 2017 through August 2017, Google Search steadily drove approximately 1.3 billion visits per week, representing 40% of external traffic referrals and 21% of total page views. 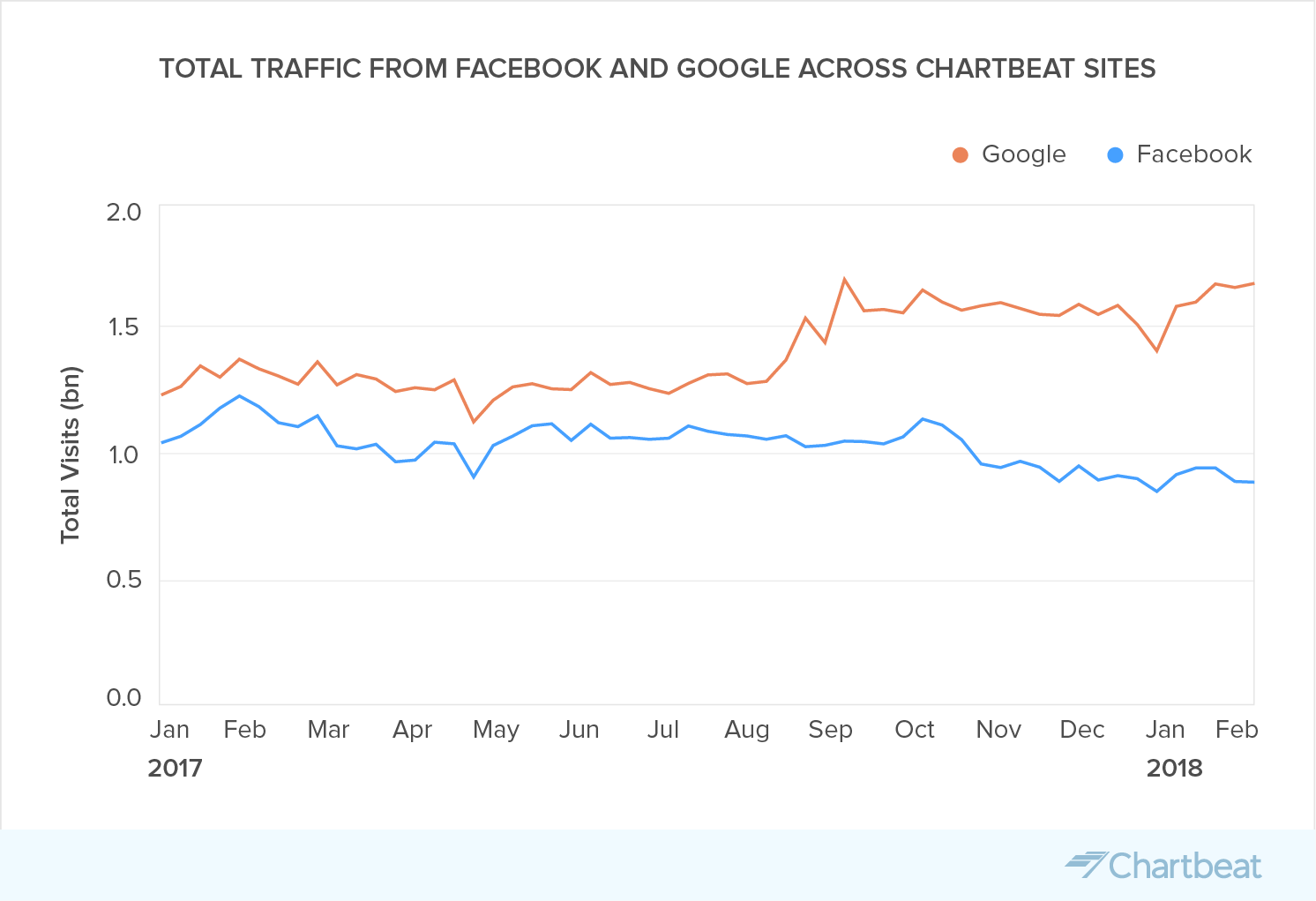 In late August, Chartbeat data scientists noticed that Google Search referrals across our client base were trending up. The sheer force of nature drove initial bumps: on August 17, much of the United States saw a total solar eclipse, accounting for the first peak in the above chart. In early September, Hurricane Irma made landfall in Florida, resulting in the second peak.

We initially assumed that after these events, traffic would fall back to normal levels. Instead, as these events receded in the news cycle, we were surprised to see that Google Search continued to drive increased traffic to our clients, hitting approximately 1.65 billion visits per week by early February, an increase of over 25% since July.

Chartbeat’s Data Science team began an investigation in partnership with our clients to understand what drove this change. Initially, our team checked if this was either a bug or the un-darkening of previously dark social traffic. In both cases, it was not. We also looked to see if Apple’s switch on iOS (from using Bing to Google as the default on Siri and Spotlight) was the key factor. It wasn’t. The growth is visible on both iOS and Android, and we have not seen a corresponding drop in Bing traffic. 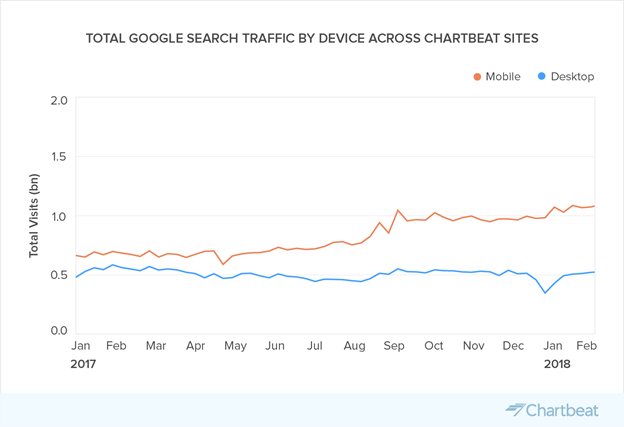 This is stunning news. The data shows that Google Mobile Search referrals have grown so much in the last six months that they now outpace all Facebook referrals (mobile and desktop). 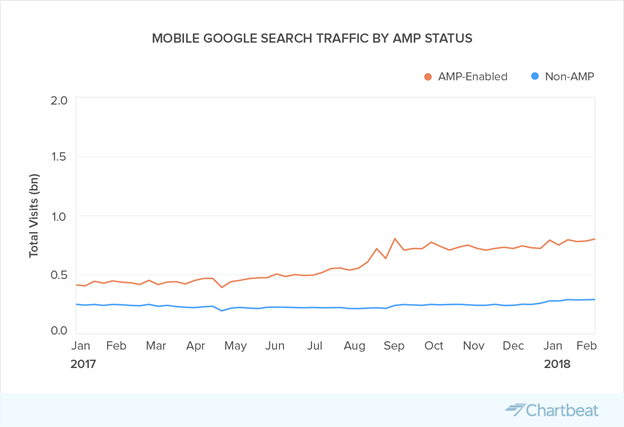 Why This Is A Good Thing

At the same time that publishers are seeing increased traffic from Google, the industry and the search giant, long at odds, are reaching a kind of detente. In a recent survey by the Reuters Institute, Google ranked as the platform that publishers [felt] “the most positively about.”(Full Disclosure, I worked for Google from 2007-2011). It’s true that Google is far from perfect — not to mention that the Reuters survey may be the only popularity contest where a score of 3.47 out of 5 can win — but there are real reasons to feel positive about the warming relationship between the two parties.

For one, there’s the cause: the underlying business models of each are pushing them closer together.

Google’s business depends on an open web that is searchable and contains as much of the world’s information as possible. The biggest threat to Google is a world in which essential information remains inside the walled gardens of platforms like Facebook, Instagram, and Snapchat, where its crawlers cannot go. In fact the AMP Project, although independent and open-source by design, was spearheaded by Google from the outset to “make the web better for all.” The roots of AMP clearly lie in Google’s need for, and corresponding commitment to, the open web.

This strategy aligns well with the vast majority of publishers, who also depend on an open web. Few, if any, have the intent to create meaningful walled gardens. Instead, they’re focused on an open web for discovery, monetization, and distribution.

Lost in the discussion about platforms and publishers is how the business model of Google differs from other platforms. Facebook, Instagram, and Snapchat depend on capturing as much of an individual’s attention as possible, and keeping it within that platform. Users only have so much time to spend with media, and a minute spent on The Washington Post is a minute that a user can’t be spending on a platform. Google, on the other hand, is primarily interested (with YouTube being the biggest exception) in getting users off of Google Search and onto another page as quickly as possible.

Google also sends traffic to publishers directly, where they can monetize using their own ad sales team and infrastructure. Google’s DoubleClick business remains the ad server of choice for publishers, and Google’s Ad Exchange is in almost every programmatic publisher stack.

Perhaps most importantly, they’ve also listened to publishers and made changes. In October, Google provided more support for publishers with subscription-based businesses by no longer requiring them to use the “First-Click-Free” program to be fully indexed in Google Search. Upon abandoning this policy, Google earned positive feedback from publisher partners around the globe.

That said, Chartbeat clients still have a long list of important — and, in my view, valid — criticisms of Google. Publishers share with us their frustrations around Google monetization, ad blocking in the Chrome browser, the Google “Answer Boxes,” and the proliferation of inappropriate content and “fake news” on YouTube in particular. We know that AMP not only has benefits in referral traffic, but that it also boosts engagement by up to 35%. Our clients continue to tell us anecdotally that AMP-formatted pages do not monetize as well as their own pages, yet they continue to experiment.

Perhaps most importantly, we should remember that Google and Facebook still capture 80% of every new advertising dollar in the world. The duopoly represents an existential threat to ad-supported media, pushing media stakeholders to work towards new business models like subscriptions, affiliate revenue, and commerce. Still, there’s a thaw in the relationship. Now, the question is what to do about it.

The Importance of a Search Strategy

Informed by the new data, it’s clear that leveraging Google and AMP effectively is more important now than ever.

First, we encourage all those who have not already done so to take a long look at “AMP-ing” their pages. The growing prominence of AMP, combined with the fact that AMP was already found to be more engaging for users than the mobile web, should make the ROI calculation even more compelling for publishers.

Second, it is important for all content teams to revisit their overall search strategies, particularly on mobile. SEO may feel like an acronym from another time, but these data trends make it clear that SEO and AMP strategies are as relevant as ever.

In news, entertainment, and sports, savvy publishers know to take advantage of Google around big events like elections and sporting events. The results can be tremendous. While most U.S. Chartbeat clients saw some increase during the 2016 U.S. Election, and many saw increases of 20x, those with the best SEO (who ranked in the top 2 or 3 for key searches like “Election Map,” for example) saw peaks of up to 100 times their nightly average on election night. 2018 promises to be a huge year in events: The Winter Olympics, the World Cup, and the 2018 U.S. Congressional Elections. All should drive global traffic, and dozens of elections and sporting events will drive outsized results regionally.

All of this traffic can be used  to generate incremental advertising dollars. More importantly, it can drive new readers to publishers where they can be converted from fly-by searchers to loyal, direct visitors to revenue-generating customers no matter the business model.

We will continue to analyze and examine the data for insights and underlying causes. If you have any hypotheses, see interesting things in your own data, or just want to talk, please reach out to us.

We’d also love to hear some contrarian views on Google. Are there ways in which their growth could be hurting publishers, in addition to what I’ve outlined here? Let us know. Same goes for sharing best practices around search.

John Saroff is Chief Executive Officer of Chartbeat, a leading content intelligence platform used by more than 50,000 of the world’s top media properties in over 60 countries. He has worked on the cutting-edge of media and technology for 17+ years, setting the daily operations and business development agendas of companies as diverse as Google, NBC-Universal, and vente-privee. John received his undergraduate degree in History from Haverford College and a joint degree in Law and Business from Columbia University.