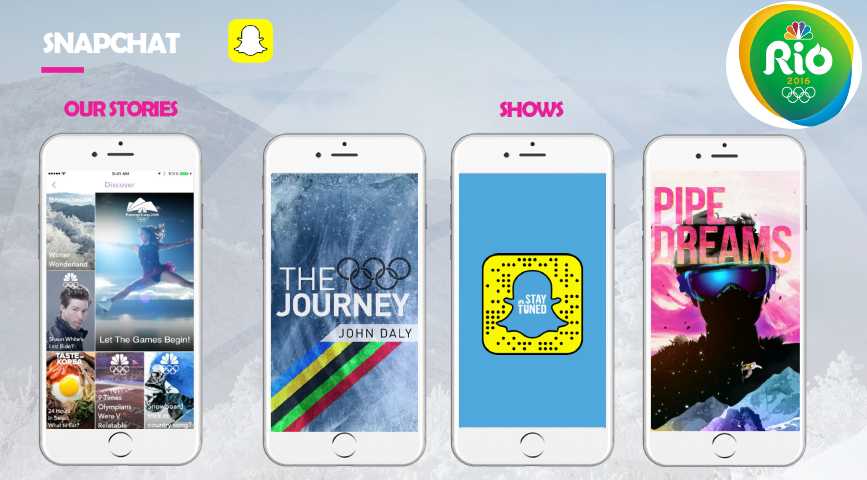 Americans are watching fewer big live events on TV — as seen in declining viewership of the Super Bowl, Oscars, etc. And you can count the Winter Olympics as another victim of those changing habits. A recent Gallup poll confirmed that lower ratings will likely follow. But Comcast and NBC aren’t letting that get them down. Instead, they are pushing even harder into social media and new platforms.

And it’s not just a way for NBC to increase its social footprint and beat criticism of #NBCFail memes of years past, when viewers were unable to access solid coverage because of tape delays and commercial interruptions. With less people watching linear TV broadcasts, multi-platform viewership on digital and social is likely going up, and NBC is pushing hard into different platforms to stay ahead of the curve. It’s a way to engage advertisers and audiences — especially younger audiences — for the future.

Here’s a look at how NBC and other publishers will take on the Winter Games this year.

The tweet from NBC Olympics is just one example of a social strategy that appears to be working: Push content online right away. Research out of the Rio Olympics from 2016 reflected skyrocketing numbers for social viewership, and there was no reason to anticipate those figures would decline.

So, NBC is seizing control over the narrative of the Olympics. It’s broadcasting the games live for the first time, streaming clips on Facebook, posting videos on YouTube and Twitter, and investing heavily in a Snapchat presence that also includes hiring BuzzFeed to produce a daily, Olympics-themed Snapchat Discover channel. NBC and Snapchat struck a partnership — one of several, as NBCUniversal invested $500 million in Snap Inc. when Snap went public last year — to broadcast exclusive content on Snapchat.

That Snap had a solid earnings call right ahead of the Opening Ceremony this year also gives the company an extra boost of recognition. Snap may be suffering the fallout from Instagram and Facebook copying some of its core features, but it has long pitched itself as a “complementary, second-screen platform for live and linear TV,” as Digiday’s Sahil Patel wrote. And that’s a selling point when you think about the ways linear TV habits are changing.

Alongside NBC’s huge push into social distribution, a few publishers are also engaging audiences in new ways to boost their own metrics down the line. The New York Times, for example, announced a “live messenger experience” with the Times’ deputy sports editor, Sam Manchester, where he’ll be messaging directly with audiences who want a closer, behind-the-scenes, personal take on the Olympics.

With different mediums for consumption — and therefore disparate methods for measuring consumption — Discovery Communications is consolidating data from linear broadcasts, digital platforms, and social media engagement metrics, to get a better picture of who’s tuning in and who is tuning out of watching the Winter Olympics. Discovery has the rights to broadcast the Games across Europe and will share these results with their clients and partners. While no measurement approach is perfect, it’s a huge step to prepare for a future where understanding metrics can make or break an editorial or ad strategy. It’s not a question of whether other publishers will follow suit, but when.

What conversation about distribution can take place without acknowledging the influence of large gatekeepers like Google? Google’s search algorithm has long been key in ensuring people can actually find all the content publishers are putting out there. This year, Google is filtering live video, VR video, and YouTube video into its search results. It’ll offer users location-specific updates about a country’s rankings and other top news stories from the Olympics. And subscribers to YouTube TV can stream over 50 hours of live video coverage, including VR content.

Let’s be clear: The efforts in social viewing and highlight reels for the Winter Olympics this year are not a one-off endeavor. Insights gleaned from how it pans out this year will help better cater to multi-platform consumption in the future — not just for the Olympics, but for all content moving online and on social. And as live events lose their luster on linear TV, more publishers will consider ways to move to social viewing while still driving revenues along with attention.