Digital Content Next (DCN) recently released findings from its second annual DCN Distributed Content Revenue Benchmark Report. The research, written about here and here,  provides marketplace intelligence on distributed content strategies and the challenges confronting publishers when working with third-party platforms like Facebook, Twitter, Snapchat, YouTube, and others. The report confirms that despite the constant changes in distributed content policies and business practices, little has changed for publishers in the last 12 months.

Facebook and Google generate the most distributed-content revenue for publishers outside of Over-the-Top (OTT). However, together they account for less than 30% of the total distributed content revenue and represent only 5% of the total average digital revenue for publishers. Overall revenues from distributed content grew from 14% in last year’s report and now represent 16% of the surveyed publishers’ digital revenues.

Despite the challenges, DCN found that publishers remain active across a range of channels distributing and monetizing content off their sites at levels relatively consistent with last year’s findings. Still, publishers remain cautious about increasing staffing for distributed content monetization. 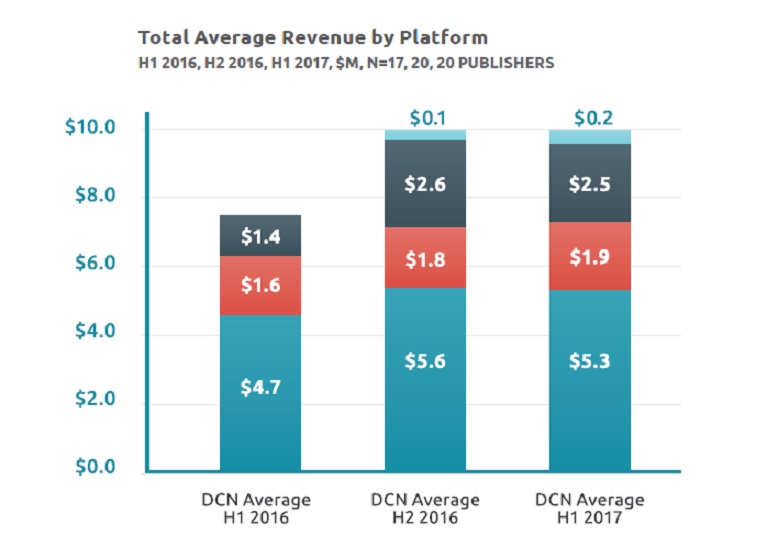 1. Concentrate negotiation at the executive level of your company management; do not leave negotiations to lower-level management and/or individual brands or businesses.

2. Focus on products that leverage your core business, are replicable, get new money, and have the potential to scale.

3. Negotiate for business requirements that support scaling in partnership agreements:

4. Test and measure content consumption and monetization through both advertising and subscription on third-party platforms and compare results to on-site metrics to inform monetization strategies.

Advertising is the most common form of monetization of content distributed on third-party platforms, with more than 85% of total average revenue sold directly by publishers. While distributed content remains an essential part of publishers’ strategic plans, the revenues earned do not match publishers’ investment. Importantly, publishers will continue to participate and test to find the best value and revenue model for their premium content.