The UK TV industry has always punched above its weight class. Smaller than Oregon, with a population equivalent to that of California and Texas (66 million), the British TV sector is a vibrant £14 billion a year ($18.58bn/yr) business, which has created formats, content, and executives, who have made their mark around the world.

So, what the can media organizations everywhere learn from their smaller cousins across the pond? Here are seven ideas and considerations (not, by all means, unique to the UK) worth exploring:

Against this backdrop, in 2016 the BBC made their youth targeted TV network, BBC Three, online-only. In part, the move reflected the fact that younger audiences are increasingly consuming less linear TV. But, it also yielded major savings (estimated at c.£30 million / $39.6 million p.a.) as the online-only service requires less original programing, and isn’t burdened with the same transmission and distribution costs.

The BBC’s move didn’t just make financial sense, it was also an effort to more explicitly take content to the spaces that their younger audiences inhabit.

British viewers have grown up in an environment where TV advertising is much less pervasive. The BBC, for example, has no adverts at all, just trailers for other BBC programs and services.

“Seven in ten (67%) say they like to watch TV programs and films on demand to avoid adverts, or because there are no adverts,” UK communications regulator, Ofcom, recently noted.

This preference – coupled with the use of ad blockers on web based TV services – should be a cause for concern, given the continued importance of traditional advertising. One potential solution, explored by the UK’s oldest commercial broadcaster ITV, is to offer a premium IP delivered service that mirrors the ad-free experience provided by HBO and Netflix.

In 2013 the network launched an iOS app that allowed Apple users to watch the last thirty days of their content (from five different TV services) without advertising, as well as live simulcast of ITV3 and ITV4, for £3.99 ($5.27) per month.

The service, called ITV Hub+, has now been rolled out to other platforms including Smart TV’s. (It also costs £3.99 a month.) Will consumers pay more for this convenience? Evidence suggest they will, and this is therefore a model that other broadcasters may want to emulate.

Given the range of ways in which audiences consume – and access content – it’s increasingly incumbent on broadcasters and other content providers to be as accessible as possible.

The BBC iPlayer, an internet streaming, catchup, television and radio service from the BBC, which celebrates its 10th anniversary this year, has always been available across wide range of devices, including mobile phones and tablets, PCs, gaming devices and Smart TV’s.

BBC Three, their youth orientated service, doesn’t just live on the BBC’s own app and web services, it also has its own YouTube channel with full episodes – and entire series – available to watch.

Other UK broadcasters have followed suit. The ITV Hub, for example, is now available on 30 different platforms, including Google Chromecast, and Xbox. At the end of 2016, the broadcaster noted that consumption (the measure of the number of hours watched) is up by 43% in the past year; and, interestingly, that Live TV accounted for c.30% of all requests.

On-demand services like Amazon, Hulu and Netflix have changed viewing behaviors. As a result, traditional broadcasters need ask whether they too should go “all in” and do things differently.

That might mean releasing new series in their entirety, offering new content for download and offline viewing (which the BBC and others offer) as well as providing “digital boxsets” so that audiences can binge on older shows.

These moves are not just designed to protect revenues and audience share, they also reflect evolving consumers behaviors. Failure to respond to these expectations means that traditional broadcasters risk being left behind. 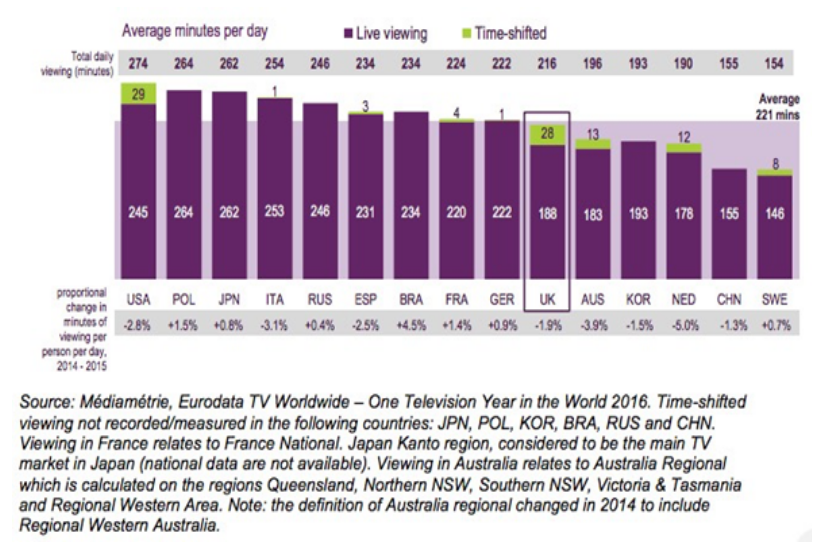 It’s not just online ads that are often terrible, many TV commercials aren’t great either. And yet, we continue to watch a lot of TV, creating prime conditions to deliver strong, effective, advertising to captive audiences.

“The average time spent watching broadcast TV across our 15 comparator countries,” the UK communications regulator noted, “was 3 hours 41 minutes per person per day in 2015.”

That’s a lot of screen time (most of it live viewing) which, when coupled by the mass audiences TV can still reach, continues to remain attractive to many advertisers.

6. Innovate and experiment with new forms of ad delivery

TV’s mass reach makes it an appealing medium for advertisers. Yet, at the same time, we also know that audience’s attention is increasingly fragmented. For many younger audiences, TV is already the second screen, and has been for some time.

As far back as 2012, the Pew Research Center found that 58% of smartphone owners used their phone to keep themselves “occupied during commercials or breaks”. But, Pew found, respondents were often engaged in second screen activity related to what they were watching. This resulted in advertisers trying to find new ways to engage audiences on their second screen. (See some great examples below targeting Game of Thrones fans).

Personalization, time-shifted ads and the use of products (like Sky AdSmart in the UK) to serve different ads to different households (or different people in the same household) against the same content, may still be relatively small markets, but they’re expected to grow quickly. As such, they’re a technology that broadcasters need to be doing more than keeping an eye on.

7. Recognize online revenues can be a major growth area

However, this relative stability doesn’t mean that sector can rest on their laurels. Finding new revenue sources, remains important. And in this space, online revenues are growing fast.

In 2011, online revenues were worth £0.3bn for UK TV companies. Jump forward to 2016, and this figure was £1.7bn, a substantial increase. Given this rapid growth, and stagnation in other areas, expect more efforts to be focused on this space.

“Despite fundamental changes in the advertising market over the last ten years,” writes regulator Ofcom in their latest UK Communications Market Report, “the television advertising market has remained very resilient due to its primacy in providing mass audiences.”

That’s not going to change any time soon, but as viewing habits on both sides of the Atlantic  continue to evolve, so broadcasters and advertisers need to refine their strategies accordingly. This means finding new ways to capture attention, serve relevant – and increasingly targeted – ads, and experiment with new revenue models.

Three areas that I believe merit more attention are: more flexible pricing models – recognizing that many audiences love to watch certain shows, series or events, but that they don’t necessarily want (or can afford) a year-round subscription – simulcasting shows (nationally and internationally) to prevent piracy, and identifying opportunities to both reduce churn, and discourage the illegal sharing of logons and subscriptions.

What we see in the UK, as well as here in the US, is that although TV’s business model is changing, there are opportunities to diversify both content distribution and income strategies. How broadcasters continue to respond to the challenges – and opportunities – presented by digital disruption, is a subject many of us will continue to watch with interest.