But how do you spot one in the wild and target it with your brand and content?

Recent research from GlobalWebIndex (GWI) and Nielsen (as discussed last week by Peggy Anne Salz, Founder and Lead Analyst at Mobile Groove) offer us some tangible insights, into the habits of this cohort, in both the US and globally.

Here are five key themes that emerged from GWI’s data:

This shouldn’t come as a surprise, but the extent of their devotion to this device might.

The average member of Gen Z (adults aged 16-20) spends 3 hours 38 minutes a day on their cellphone, around 50 minutes more than the global average.

As a result, for younger millennials, time online via mobile is greater than internet time on all other devices combined.

The dominance of this technology means that across 35 different global markets, GWI found “7 in 10 say their mobile is their most important device for getting online. ”

Consumption of services ranging from YouTube (visited by 93% of online Millennials each month outside of China,) to catch-up TV services and OTT providers – especially Netflix – all overindex with millennials, with their viewing experience often mediated through mobile.

“Many commentators argued that the larger screen sizes and resolutions of PCs, laptops and tablets would forever anchor them at the center of video consumption habits,” recalls Felim McGrath, senior trends manager at GlobalWebIndex. 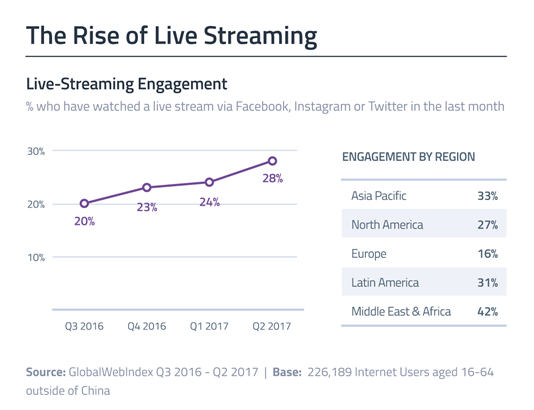 “Although these devices remain important to Millennials, video engagement [and] the boom in video consumption on mobiles and via social has had a profound impact on the industry,” he said via email.

“The growth of live-streaming is a key example here,” said McGrath, “providing an entirely new format for brands to engage with consumers. ”

According to GWI’s latest data, 28% of all internet users have watched a live stream on Facebook, Twitter or Instagram, as this product rapidly becomes mainstream. Interestingly, however, it’s the emerging markets that are leading this charge, with Europe and North America bring up the rear.

Given the propensity for ad-blocking around the world, particularly in the mobile-first markets of Asia-Pacific, it’s imperative that publishers improve the ad experience and find new ways to achieve the same revenue raising goals.

Although mobile ad-blocking adoption has taken off more slowly in North America and Europe, data from other regions indicates how this might evolve if consumers become more aware of the tools they can use in this space.

At present, GWI has previously reported, “only half of internet device owners in the United States are even aware that they can block ads on their mobiles.” Yet, at the same time, “1 in 3 [American] smartphone owners say that they see too many ads when browsing the mobile internet.” You don’t need a crystal ball to join up the ad-blocking dots.

“The opportunity for brands is apparent here,” GWI’s Katie Young wrote in a recent blog post about live-streaming. “As ad-blocking continues to grow in popularity, across both desktops and mobiles, it’s more important than ever for brands to engage consumers via entertaining content and native advertising. ”

This is important for brands, given the prevalence of ad-blockers with younger audiences. GWI’s global sample found that 44% of Gen Z (16-20 year olds) and 51% of Millennials (21-34 year olds) had used ad blockers.

Drivers for this include concerns over the impact of mobile ads on data allowances, a dislike for pre-roll adverts and frustration at the volume – and irrelevance – of many online ads.

Although still a niche, and for some a rather baffling market, large media companies – and an increasingly sizable millennial-led audience – are enthusiastically embracing this emerging vertical.

“This is a significantly underestimated and often misunderstood industry,” according to McGrath. “Our research shows that, globally, a fifth of Millennials watched an eSports tournament within the last month.”

Led by engagement in China and other Asian markets, GWI’s research indicates that internet users in APAC are 32% more likely than the global average to view eSports tournaments. 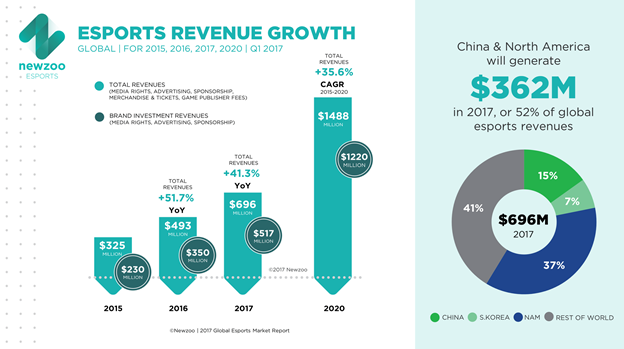 Although a relatively nascent genre in North America and Europe, ESPN already has a dedicated eSports vertical, with other networks such as NBC Sports and TBS also following them onto the field, making this an online genre worth keeping an eye on.

Analysis from Newszoo, published in February this year, predicted that the eSports market will be worth $696 million this year (a year-on-year growth of 41. 3%) growing to $1. 5 billion by 2020. The top market, revenue wise, is North America, with incomes of $257 million anticipated this year, rising to $607 million at the end of the decade.

“While this medium is still developing as a platform for brands, the marketing potential and revenue opportunities which this new genre of gaming entertainment offers needs to be better understood,” said McGrath.

5. Look to China for an insight into the mobile future

Finally, for an indication of where all four of these previous trends are aligning – and to see how innovative publishers and media companies are addressing these challenges – McGrath encourages industry leaders to look more closely at some of the biggest APAC markets.

Both South Korea and China have played a pivotal role in the advent of eSports, with Chinese media giant Tencent reportedly committing $15 billion to the genre over the next five years.

According to Mashable, over 47% of Tencent’s 2016 revenue came from games, including eSports, inspiring other Western tech companies to try get in on the act. Amazon, for example, already owns the eSports service Twitch, which has 100 million global users, whilst Facebook has signed eSports deals and is exploring other opportunities with content providers in this space.

The dramatic growth and diversification of Tencent (now the 10th biggest publicly traded company in the world by market value) and other players in China – such as the news aggregator Jinri Toutiao and the video app Mango TV, which is expanding rapidly among Chinese millennials – offer a further heads-up as to how social and mobile may evolve in more western markets.

Subsequently, McGrath identifies China as the overseas territory that industry leaders in the USA and elsewhere should be monitoring more closely. “Consumers trends within the country are often examined but the lessons here are still worth understanding,” he suggests.

Although China is a distinctive market, McKinsey noted back in 2012 that “the ingredients of a winning strategy are familiar. ” Their recommendations – such as the need for authenticity, digital experimentation, and the linking of all online activity back to core brand goals – would be recognizable to anyone working in this space, wherever they may be in the world.

Jump forward to 2017 and China’s biggest social networks are real pioneers, having typically absorbed other activities – ranging from eCommerce to transportation, video calls, messaging services and digital payments – into their apps, creating their own online walled gardens and a model for growth that many in Silicon Valley seek to imitate.

“The evolution of social media in the country, particularly within the realm of commerce and gaming, is leagues ahead of that seen in western markets,” McGrath concurs. “Also, it’s Chinese companies that have truly grasped the vast potential that the smartphone offers, across almost all industries,” he said, making them – as well as the Chinese market – one to watch.

Collectively, these five developments provide publishers with a range of insights into key considerations such as evolving delivery formats, emerging content genres, and new potential revenue sources. Given their impact and influence of these areas on millennials, these are trends that no media company can ignore. To do so, risks overlooking a lucrative young audience, and means publishers may be on the back-foot when these habits tip over into the mainstream. That’s a scenario every company should clearly seek to avoid.