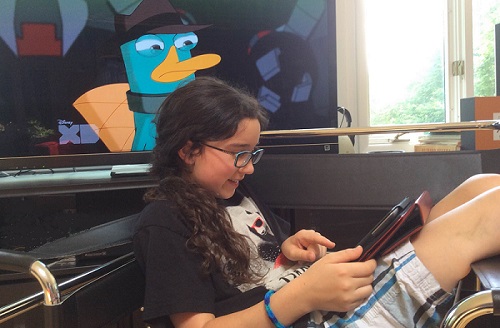 In our latest study on kids’ preferences in viewing TV content across devices and platforms, we find that in a majority of family households with tablets and smartphones, TV is no longer the first choice for entertainment, with 57% of parents saying their child prefers a device other than the TV to watch video content.  Mobile devices offer versatility, simple user interface and a ‘personal’ viewing experience.

As such, in households where tablets and smartphones are accessible, they’ve now taken the lead with kids as the preferred way to enjoy, explore and discover video content. In fact, 58% of kids in households with tablets have their own, making it even easier for them to watch the video content they want to watch, whenever and wherever they want.

TV as Punishment?
TV has become the ‘second’ or even third screen of choice for many of these kids – so much so that nearly 50% of parents say that when their kids misbehave, to punish them, they take away their tablet and make them just ‘watch TV instead’– creating a generation of kids for whom ‘TV is punishment.’

Additionally, when given the choice between dessert or more time on their tablet, 41% of parents say their child would choose the tablet over dessert, compared to just 33% choosing dessert over the tablet.

This trend in media and platform preferences has implications for TV networks, cable and satellite companies, streaming services and content creators as they market and develop entertainment for the next generation.

Self-Directed Viewing is Here to Stay’
|As TV content providers watch their audiences rapidly shift from traditional viewing to streamed and digital, this study shines a light on kids as the ‘canary in the coal mine,’ showing a need to redefine audience reach expectations, programming and creative development, as well as measurement and monetization strategies sooner rather than later.

In effect, streamed content services are now eating into linear TV audience share, just as a large percentage of audience share shifted from broadcast to cable only a couple of decades ago – but at a more rapid pace and without a solution in place to measure viewing on new and preferred platforms.

In a meeting with a major network client the other day, I was earnestly asked – ‘Don’t you think that when they grow up, they’ll want to watch live TV just the way we do – or just turn the set on and channel surf?’ my response was ‘when they grow up, you’ll want to provide them with access to your content however they want to access it – on any platform or device, at any time and on their own terms – and the time to figure out how you’re going to do this is now.’

*Study included in-home ethnographies and a survey fielded among 800 moms and dads of kids ages 2 to 12       who live in the United States and watch at least some video content on a tablet and/or smartphone.