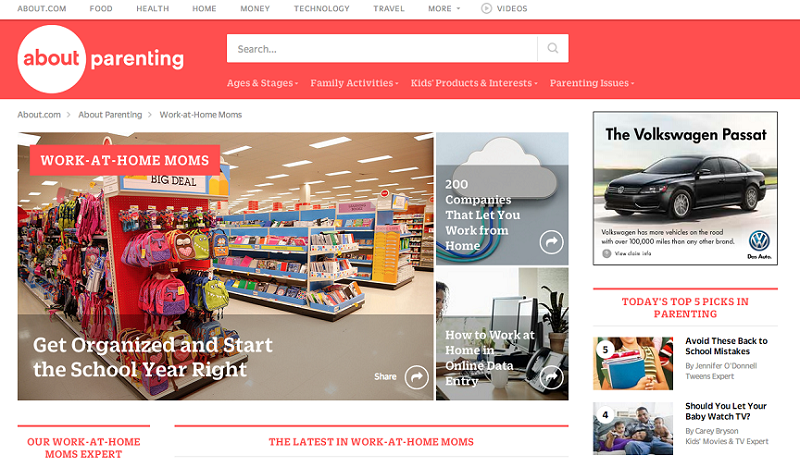 About.com debuted a major redesign this week, which CRO Brian Colbert says was, “long overdue.” While the site holds the enviable number 15 spot on Comscore’s list of most trafficked websites, About.com had fallen behind on design, usability, social and the ability to effectively monetize its traffic. “And if you aren’t innovating,” says Colbert, “you are falling behind.”

One significant challenge in undertaking an overhaul is what has always been one of About.com’s strengths: its deep well of content. About.com boasts 3.5 million pieces of content covering about 1,000 topics. “We amassed so many assets over time and we couldn’t just flip the switch all at once, so we opted for a phased rollout.”

Starting with a redesigned homepage in July, then working through the most popular verticals, Colbert says they were able to evaluate what the users responded to and what was most effective from an advertising standpoint “We made tweaks and modifications based on our analysis as we went. So we feel pretty confident of our major release Tuesday, and we rolled out the final two channels Wednesday.”

User Experience and Relevant Content
What’s readily apparent is that the new site has a much more modern, visual sensibility. “The content was always good,” says Colbert, “but it wasn’t presented in the most elegant way. In fact, the user experience had become really dated.”

In terms of content, Colbart says About.com will continue to use “a lot of the strategy that has worked well for us in the past with our narrowly focused experts that run a wide gamut of topics.” However the new site reflects an increased emphasis on social sharing and on building topic-centric user destinations. Each vertical has its own dedicated general manager and a customized social strategy. In the near future, About.com’s GMs will be making a concerted effort to seek out “personalities in their verticals who will bring more credibility and panache.”

Though the vertical landing pages and article templates are very similar at launch, according to Colbert over time they will begin to look more distinct. “The Money section will include rate tables and stock tickers; each will feel like their endemic brethren,” he said. The objective is to become less reliant on search to drive the site’s traffic and to become a place that enthusiasts and information-seekers routinely rely on.

Data-driven Relevance
Another objective of this relaunch is increasing users’ time spent on About.com by serving its 85 million daily visitors relevant content once they’ve found their way to the site. “We are aggressively surfacing related content. Recirculation is a real focus for us.” This goal is underpinned by About.com’s increased emphasis on data analysis, which includes a three-person (and growing) data science team. Colbert says their efforts have yielded a new understanding of how users interact with About.com’s content. “We’ve developed a proprietary tool that helps us understand which articles are related to each other, even if they may not seem relevant at first.” For example, if you are “reading up on million dollar investments, you might also want to read an article on Cayman travel.”

This data focus will also help About.com better monetize its audience by offering advertisers a better context for their messages so that they can be included on areas of the site where one might not immediately think to look – essentially in-house behavioral targeting.

In addition, About.com is betting heavily on content marketing. “That term gets tossed around a lot these days, but to us it means enabling advertisers to surround their content with ours in a way that makes it all relevant. We are very well positioned to take advantage of native and do it right because the nature of our content lends itself to native.” Colbert cites a current native campaign on How to Train for a Long Hike by the Merrell shoe company that is running in the Hiking section. “They already have authenticity in the space so users feel the advertiser plays a positive role through content. Done right, native should feel additive to the user experience.”

And in 2015, look for a major video push from About.com. Colbert says they have a new studio and are actively producing a significant volume of “video that will enhance the user experience.” With the relaunch and future plans, Colbert says that user experience will not be measured by clicks alone. “We are judging the effectiveness and success of the redesign through engagement. We want people to visit more often, stick around longer and do more on the site.”