For the umpteenth time, Twitter is trying to attract and keep new users in an effort to stay up with Facebook and please Wall Street with forever growth. (For some reason 316 million users isn’t enough, while also beating top and bottom line earnings expectations.)

The company has made a series of up-and-down announcements, from the new publisher-friendly Moments tab, to naming Jack Dorsey CEO to right the ship, to coming across-the-board layoffs. Is this a course correction, or just noise and fury signifying nothing? There’s much that will appeal to publishers and marketers in Moments, but it will need vast improvement for users to stay on board.

Moments is Twitter’s first major move into human-powered editorial. It includes a new tab – with the lightning bolt icon (it was previously known as Project Lightning), including editor-generated ”stories” told through tweets, images and videos posted by users. The idea is to help newbies see what’s breaking now on Twitter via trusted sources. But so far there’s a heavy influence of sports, TV shows and other fare that should have marketers salivating.

Moneymaking Moments
The launch coincided with a backlash from some users, wondering why customized or personalized Moments weren’t available. But this apparently stemmed from a misunderstanding of the product: Moments is geared toward the casual Twitter user, not the people able to find their moments on Twitter already.

Certainly, Moments makes Twitter much easier to use, since it solves the problem of figuring out who to follow for a given topic or story and provides context quickly. Although Twitter hasn’t specified how it will make money off the new feature, it’s assumed sponsored Moments could be a form of native advertising to help boost profits.

Following the likes of Snapchat’s Discover, Facebook’s Instant Articles and Apple’s News app, Twitter’s Moments is yet another example of the trend toward new walled gardens. Given that users are spending more time online and on these platforms, distributing news and information to them directly through these channels is a no brainer. It’s also a strategic move for publishers who have long been seeing eyeballs migrate away from their home pages and onto these platforms.

Who’s In So Far
Like the other examples of distributed content, a group of publishers (which is expected to grow over time) will have the chance to contribute to Moments, including Bleacher Report, BuzzFeed, Entertainment Weekly, Fox News, Getty Images, Mashable, MLB, NASA, New York Times, Vogue and the Washington Post. This gives Twitter name-brand content with publishers curating their own Moments. The Washington Post, for one, has been quick to back up the project.

“We’ve all been hacking around this for a long time,” Cory Haik, executive director of emerging news products at the Washington Post, told Poynter. “There’s Storify, there’s embedding tweets within a blog post — there’s all kinds of tools that try to make it easy. But this does (all of) that, and it also makes it highly visual and easy to get through.”

Publisher vs. Publisher
But Moments also pits publisher against publisher, vying to join the platform and then fight for more attention. It brings us back to questions of just how much control Twitter — not to mention other social platforms — ought to have. Other unanswered questions on editorial power, including what gets placed in the “Today” tab of Moments and how the feature will become part of a natural user experience, have also surfaced.

Vivian Schiller, former head of news for Twitter and now an advisor for Vocativ, raised some of these issues in an interview with Mashable: “What will their editorial standards be? How can they be both partner and competitor to news organizations? How will they compete with the dozens of other successful news aggregators, many of whom use Twitter as a source?” she said. “And will this really drive a spike in active users?”

And, not surprisingly, she acknowledged the smart revenue play at hand: “In any case it’s a boon to advertisers who can now sponsor timelines.” A boon for advertisers and Twitter, but for publishers? That remains to be seen. 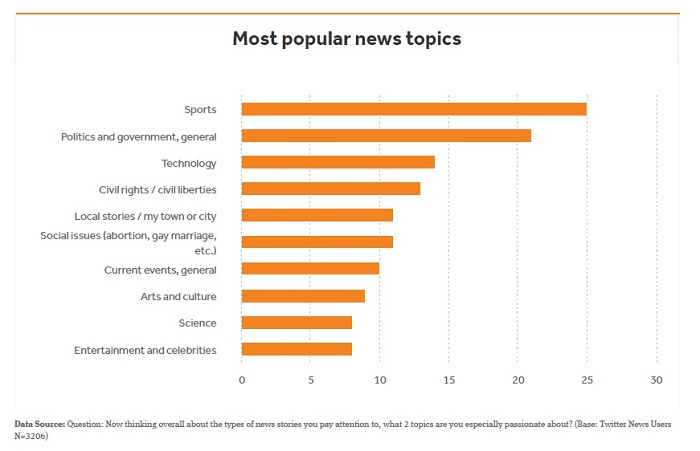 How are we to judge social juggernauts such as Twitter anyway? If we go by Wall Street, the longtime microblogging service is a miserable failure for having “just” 288 million active users at the end of 2014. While most publishers would give their left arm for that kind of massive engagement, Twitter is judged by a different standard: Facebook and its billion-plus user base. Twitter is damned if they do (grow users without revenues) or damned if they don’t (grow revenues without users).

And even when Twitter turns around its business, nearly doubling revenues in its most recent quarter to $479 million — with a profit to boot (if you don’t count one-time stock expenses) — there’s still grousing by some journalists who say Twitter isn’t driving enough referral traffic to their stories.

The Atlantic’s Derek Thompson recently did an in-depth analysis of his engagement on Twitter by looking at the stats surrounding what he thought was an enticing tweet. He found, disappointingly, that only one percent of the people who saw that tweet actually clicked on the link, even though it received more than 1,200 retweets and had upwards of 155,260 impressions. The link, of course, was to Thompson’s story on The Atlantic’s site. As he put it, “So, 99 percent of my labor on Twitter went to Twitter, and 1 percent went to The Atlantic. That’s not a very good deal for our boss!”

Chartbeat CEO Tony Haile tweeted the moral of Thompson’s story: that there is “effectively no correlation between social shares and people actually reading.”

However it’s important to remember that the frustration with Twitter engagement and branding is different for different users. Journalists interact with and use Twitter in one way, brands and publishers another. Building a brand or following, or attracting the influence of “tastemakers” who could help a tweet reach a wider audience, is strategic for both groups. So even if Thompson’s tweet had a poor click-through rate, no one can deny the power of those tweet impressions. He also offered up the kind of tweet that’s useful for people on the go or those who aren’t necessarily interested in reading the whole article (as upsetting as it probably is to most writers, sometimes a headline fills the reader’s need).

Thompson tweeted: “Almost every major patent concept from the 1930s was in chemistry. Today, all software.” And he included a visual to illustrate his point.

Almost every major patent concept from the 1930s was in chemistry. Today, all software. http://t.co/I5TamvQHdQ pic.twitter.com/QHNDFAyNRl

Arguably, that is a pretty satisfying tweet all on its own.

But brands are pretty happy getting engagement on Twitter without clickthroughs. Digiday’s John McDermott responded to Thompson’s story by noting that a Simply Measured report found that “engagement with tweets from [top] brands increased by 85 percent in the last three months of 2014.” Plus, out of the Top 100 brands, the volume of tweets increased by 11% and follower counts were up 38% — all likely due to the more prominent engagement buttons on Twitter.

Perhaps anticipating letdown at its poor user growth, Twitter announced a slew of new offerings ahead of its fourth quarter earnings. Users can now take advantage of group messaging, utilize a new in-site video recording service up to 30 seconds (compared with Vine’s six-second loop), observe the tweets they may have missed while they were away, and — for new or potential users — get insight into top tweets on the revamped Twitter homepage.

Twitter also recently announced that Twitter ads would be featured outside of Twitter for the first time, on Flipboard and Yahoo Japan. The new partnership effectively helps Twitter make money off of non-users. Although it’s tough to say now how effective this collaboration might be (don’t forget Twitter will have to split the revenue), it’s positive news on the advertising business front.

Maybe it’s time we just face the facts: Twitter is not another Facebook, nor should it strive to be. It’s a great communication platform for reporters, publishers, brands and anyone who wants to help shape the conversation about what’s happening now (or on TV). Even if USA Today’s “For the Win” blog has dropped the Twitter share button on its stories, that doesn’t mean they won’t be present on Twitter. It just means that the value of a tweet is more than a tally of clickthroughs.