Greater transparency on rebates and agency business models is critical to the level of trust between advertisers and their media agency in today’s marketplace. In a recent study conducted by ID Comms, nearly nine in 10 (86%) of marketing, media and procurement specialists reported that the current levels of trust that exist between advertisers and their media agencies was no greater than average. Further, 80% of the respondents do not anticipate any change in the level of trust in the coming year. Importantly, just over three-quarters (77%) of respondents reported that a close and trusted relationship between marketer and agency will deliver better stronger performance; it’s something many want to see fixed in the near future.

ID Comma conducted this survey globally with 65% of respondents based in Europe, 25% in the U.S. and 10% in the rest of world. Interestingly. Interestingly, 67% of U.S. agency respondents ranked higher than their counter parts in Europe with regards to “how the agency trades with media vendors” and “how the agency manages rebates” as the most significant items to determine advertiser trust in their agencies

I have no doubt the next year will bring meaningful developments in defense of the open web—the essential platform where publishers are able to distribute and monetize their content directly with consumers. On the open web—one in which information flows freely and gatekeepers are not able to restrict that flow—transparency rules, from sources to source code, and the most valued commodity is trust.

To that end, champions of the open web are now writing and debating rules that will impact the value of publishers’ relationships with their readers and viewers. It’s our role at DCN to ensure that the united voice of the 74 premium publishers in our membership is clearly heard.

Last week, DCN sent an important letter to the Federal Communications Commission (FCC) after it recently signaled it’s drafting the privacy rules it promised last year when it issued the Open Internet Order (aka “Net Neutrality”). Internet Service Providers (ISPs), which include both carriers and cable operators, have argued that the rules of the wider web are sufficient for them. Of course, Verizon Wireless famously proved otherwise last year.

DCN, as the voice of premium publishers, has asked the FCC to consider context and consumer expectations in writing these rules. Significantly, it appears that no ISP wants to be identified as holding a privileged position in being able to collect and use data on consumers. I’m not sure how this argument holds water considering the fact that consumers now keep personal, connected devices on 24/7 wherever they go. Consider that your mobile broadband provider can see all the activity on your phone—your web history, app usage, phone calls, friends and even your location history—and then tie that data back to the subscriber data they have about you. Clearly ISPs have a heightened responsibility to provide transparency, choice, and control for consumers.

ISPs have begun to fund research from respected academic and industry thought leaders in an attempt to prove that they are in an inferior position to companies like Facebook and Google in collecting this data. Let’s face it: There are also plenty of concerns about how Facebook, Google (and much of the adtech complex) mine data across the web and mobile as well, and our interest in a higher level of consumer trust is certainly not limited to the ISPs. All parties collecting data out of context of consumer expectations carry responsibility to be transparent and offer real choices to consumers. That said, just because some parts of the marketplace have systemic problems with trust doesn’t mean we should default to the lowest common denominator for ISPs. We should all aspire to do better – publishers as well, who carry the flag of trust as much as any party.

DCN’s focus on data ownership and consumer privacy is not only an effort for securing consumer trust but also an effort to secure the economics that will pay for the trusted content of the future. Location and behavioral data collected by third parties is what currently fuels much of the dysfunctional digital advertising marketplace. You know, the one where Google and Facebook eat half of the dinner while adtech gobbles up much of the marketers’ dessert. This market, unlike any other media, consists mostly of direct response advertising targeting thumb taps, installs, clicks and fleeting actions – not the kind of advertising that engenders consumer trust and funds premium content experiences.

Then, of course, there is the rising specter of ad blockers. The industry has rightly been up in arms over this issue for more than a year. The IAB, which represents ad tech companies, went so far recently as to call ad blockers “an unethical, immoral, mendacious, coven of techie wannabes” with “silly titles and funny walks.” Although it made for an interesting sideshow, this is a serious issue and we need to be clear on what is happening: Google, the single largest recipient and dependency of advertising revenues and by far the largest and most influential member of the IAB, is paying the #1 blocker, Adblock Plus (“ABP”), to have its ads “whitelisted” and thereby likely helping to keep ABP’s lights on.

However, pointing all of the blame at ABP and their sketchy business model only does so much because I’m not so sure that consumers care. If ABP and any other for-profit ad blockers went away tomorrow, there are plenty of non-profit ad blockers that would immediately fill the void. The best thing the leaders of our industry can do is to focus on solving the problem from the consumer’s perspective.

I see countless examples of DCN Member companies taking this approach and testing a wide range of possible solutions to ad blocking, from revamping ad and content experiences to consumer education to streamlining mobile experiences by reducing interference by intermediaries. And this month, I have the opportunity to explore approaches and issues from another vantage point at dozens of meetings with senior leaders of European organizations representing advertisers, agencies and publishers. As always, I’ll be leaning in, particularly focused on seeking consumer-focused insights that help advance the future of trusted content. I expect these insights to include thoughts on Google AMP, Facebook Instant Articles, ad blocking and an issue very much related and important in 2016—data ownership. I’ll keep you posted. 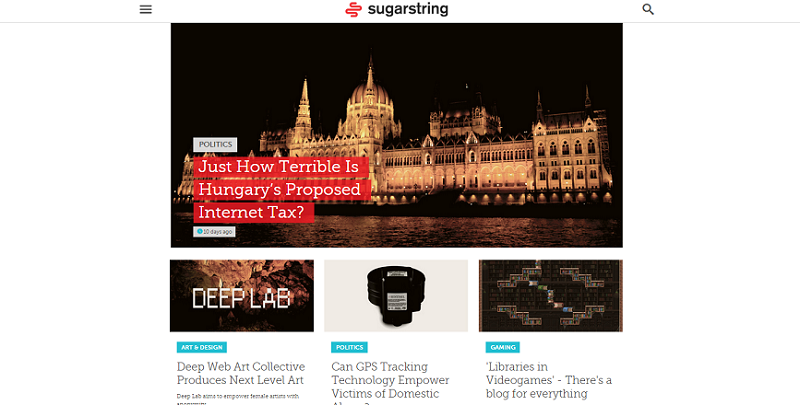 Over the past week or so, several good pieces have been published about the Verizon-sponsored technology news site SugarString, each offering some excellent insights for organizations seeking to create their own content-centric site or to create sponsored content distributed elsewhere:

The Daily Dot article focuses on the inherent dilemma created by a purported “news site” that expressly forbids its reporters “from writing about American spying or net neutrality around the world, two of the biggest issues in tech and politics today.”

Verizon fired back at The Daily Dot saying “SugarString is open to all topics that fit its mission and elevate the conversation around technology.”

Takeaway: Brands venturing into developing their own content sites – particularly news-focused ones – must work doubly hard to convince readers they are providing a fair and transparent view.

Washington Post blogger Nancy Scola takes a close look at the “thoughtful, tech-focused stories that track humanity’s climb toward what’s next.” She finds that, “to date, the site’s articles have been focused on simply affirming the mobile tech lifestyle.”

Scola also wisely raises the issue of labeling the content as branded content, pointing out that if this content appeared on a traditional media outlet, it would be labeled something along the lines of “sponsored advertising.” She also finds the small “Presented by Verizon tags” to be of questionable value in terms of transparency.

Takeaway: Clear labeling is unequivocally a best practice for any branded content, but it doesn’t solve the issues around value and transparency. In addition, given the variety of places content is consumed (social, mobile, etc.), creating labeling that works in any context remains a challenge.

In his The Media Equation Column, David Carr writes that he stumbled across SugarString and found its coverage of privacy somewhat baffling…until he noticed some “teeny type that said ‘This article was written by an author contracted by Verizon.’”

Carr calls out a slew of other branded content sites in a variety of subject areas, some better than others, wisely noting that “publishing looks easy, but is filled with peril.” For Carr, the Verizon foray into brand-underwritten news is a cautionary tale about what we may have to do to fund the creation of content now and in the future.

Takeaway: Creating engaging, credible and trustworthy content, particularly news, is challenging even for mature media companies; brands diving in for the first time should check the water’s depth and err on the cautious side

Undoubtedly, others will continue to pick apart Verizon’s foray into creating its own tech news site to drive awareness and build its brand through content. Certainly, experimentation is important, but transparency and delivering valuable information that users can trust must be at the top of the list for any content initiative.