The former President of The Apache Software Foundation, who now leads compute architecture at Bloomberg, discusses the financial technology company’s deep engagement with open source technologies and the community. 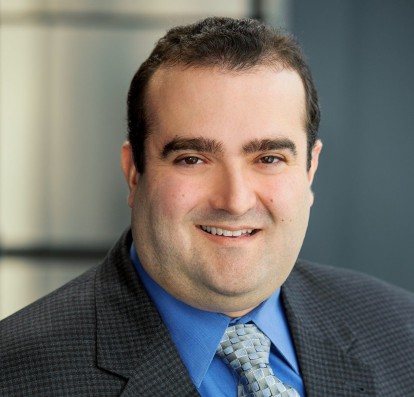 The software world isn’t zero sum. Just ask Justin Erenkrantz, head of computer architecture at Bloomberg. Erenkrantz isn’t your typical developer. He joined the company from the world of consumer-facing media startups. He had previously served as a Director and President of the non-profit The Apache Software Foundation. Apache’s all-volunteer board oversees more than 350 leading open source projects, such as the world’s most popular Web server software.

At Bloomberg, Erenkrantz was charged with helping to turn Bloomberg’s nascent open source culture into a cornerstone of its technology strategy. It’s been a massive job. But with Erenkrantz’s leadership – combined with the efforts of many others in both Bloomberg’s engineering operation and CTO Office – the company has moved into a range of open source projects, from the software application layer down to hardware and networking technologies.

As more open approaches to innovation catch on, Erenkrantz discusses how Bloomberg has embraced open source, and used the methodology to surface the best ideas—sometimes seeking forgiveness rather than asking for permission.

The following conversation with Erenkrantz has been edited for length.

The evolution of open source
One of the selling points of coming to Bloomberg was the opportunity to help shape Bloomberg’s open source agenda. My background is in open source, and contributing to and providing leadership within open source projects was something that was really valued. I remember talking with [Bloomberg co-founder] Tom Secunda about the values at Bloomberg. We wanted to start sharing what we do.

Over the last five years—even before I started— we were starting to contribute and work with the communities. It reached the point where Bloomberg needed some folks with experience in the open source community. That’s when I joined and CTO office member Kevin P. Fleming joined shortly after.

There’s a constant feedback process. We talk with a lot of the application teams, and they’re usually working on something for a particular client or to create particular functionality. They’ll tell us they need a new database, for example, and want to know what databases are out there already and the constraints. We’re familiar with a lot of the spectrum of [available] technology, so we can make recommendations.

Taking the lead on OpenStack
We decided to publish the Chef cookbooks that we use to build OpenStack clusters. We were a very early adopter of OpenStack. We started about four years ago in the CTO Office, with research and evaluation projects. We incubated at first, and now we have a fantastic R&D team that is really driving our OpenStack efforts forward.

How do developers get compute, storage and networking resources? And how do they do that in a fast and flexible way, and within the Bloomberg environment? There is a lot of infrastructure that goes into creating a permission-less development workflow, and a lot of automation is required to make that seamless. 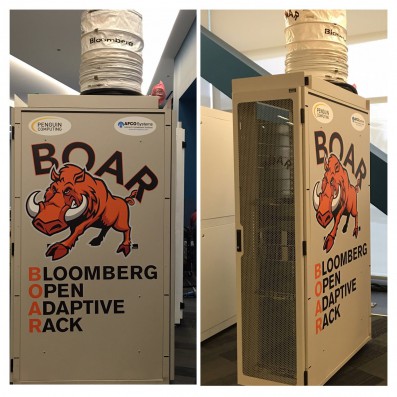 Don’t ask for permission—just go
The great thing with open source is a lot of this new infrastructure we’re building is all built on top of open source. So anybody can go use the same thing—whether it be OpenStack, Apache Solr, Apache Hadoop, or Chromium.

And we talk a lot about culture change. There were developers who felt like they had to ask for permission. I have to have a technical enablement to allow a permission-less workflow, but we also have to yell and scream to our developers: Go, go, go! Don’t ask for forgiveness—just go! I think we’ve been very fortunate here at Bloomberg, being able to get buy-in across the entire organization to say to our security teams, our legal teams: the default answer isn’t no.

In the end, everything we do is geared toward making the best product for our customers, so why shouldn’t we be using the best tools available?

Open source for the greater good
In the open source community, you’re always putting the code first. It’s never about the people. And that culture of making the best product very much exists here at Bloomberg. It doesn’t matter where that idea came from. It’s about how we put all of our heads together. Whichever the best idea is, let’s go with that.

So, that’s definitely been a value that we can see – a rising tide lifts all boats. I am a very firm believer that the more people you get in the ecosystem, playing with it, contributing to it, the better everybody is going to be.

This article originally appeared on Bloomberg.com. It is republished here with permission.

The Washington Post isn’t just investing in innovation, it’s investing in the media innovation ecosystem with the launch of a new engineering blog that provides an inside look at the media company’s development challenges, strategy and tactics. Washington Post Chief Architect, Greg Franczyk, says that his team is tackling problems faced by others in digital media and the new blog offers a place to openly share “what we are doing to solve these problems, so that others can use our ideas, but also give us feedback to improve what we’re doing.”

The fact that this is an engineering blog is in itself significant. Over the course of his four-year tenure, Franczyk has seen a dramatic change in the company’s approach to technology. “When I started in 2011, we didn’t have an engineering department; we were really an IT department. In an IT culture, you work with vendors; you call the support line. In an Engineering culture, you build things and solve problems.”

Franczyk says The Washington Post had a good focus on technology under former CEO Donald Graham, however “Post-Bezos, technology became front and center,” and the transformation has been great. Their “scrappy” engineering team has adopted a move fast, fail fast ethos in which they are constantly trying to solve newsroom challenges and problems faced by product teams. “Because we are doing so many things, trying so many things, and moving so quickly, we can offer insights that will be applicable to others out there.”

While the blog will focus on tactics, it will also touch upon the strategic thinking behind the tactics. Franczyk believes that “your culture is your strategy,” an ethos that comes through on the blog driven by The Washington Post’s experimental, innovative culture. “It would be nice to say one thing happened that made us successful. But ultimately, it is a tapestry.” He credits the organization’s drive to reach new digital audiences and increase its production and distribution of original content as essential elements to its overall plan for success—pointing to its record-setting traffic month in September. Though “all these things have a multiplying effect, you couldn’t reach these kinds of audiences without strong digital capabilities.”

Overall, Franczyk believes the tech story needs to be better integrated into of the bigger story of the landscape of industry solutions. “The whole industry is on the verge of a revolution,” he says. And while “working in a silo is okay for some things, others require industry-wide change.” With the new blog, he and his team are optimistic that they can help drive industry solutions, but also fuel the culture of innovation and experimentation that is driving The Washington Post.

It could be my bias, but I’m hard pressed to picture a content strategy that isn’t a digital content strategy. Even organizations that deliver via multiple channels (yes, even print-centric ones) must weave tech into their business plans and way of working. Yet there are still far too many organizations limping along on cumbersome content management systems or kluging together a patchwork of fixes to address emerging distribution channels and evolving marketer expectations.

As a long-time tech journalist, I admit that I look with envy at some of the pure-play digital media companies and their emphasis on smartly integrating technology across all aspects of their business. Consider Vox Media, which takes an approach to technology that is journalism-centric. Wait, no, digital journalism-centric. As Ezra Klein said when leaving the venerable Washington Post to join Vox, today’s journalists are “held back” by systems created to deliver print products. And I’m sure there are many who would echo the sentiment with regards to other systems designed for analog channels that have been adapted to accommodate digital.

Given that many organizations are still reliant on the bulk of their revenue coming from non-digital content, it isn’t surprising that their tech strategy follows suit. Yet the increasing emphasis on digital-first-strategy isn’t limited to journalists longing for tools that will allow them to quickly deliver data-driven stories optimized across multiple channels. Marketers are seeking data-driven solutions optimized across multiple channels as well. Clearly, developing tech strategies that align with these expectations is a must-have. Easier said than done.

But there are those who see technological disruption as an opportunity for innovation. At our new Content All Stars event, Jason Silva–who may be best known as host of National Geographic’s Brain Games (though he is gaining international notoriety as a futurist and digital philosopher)–is looking forward to exploring the technological forces that have blown up the media and marketing landscape and created an infinite opportunity for new ideas to be built up from the rubble.

The Weather Company is certainly no stranger to new ideas either. The company leverages data to drive content and marketing experiences in ways few others have yet envisioned, much less delivered. At Content All Stars, Vikram Somaya, GM of WeatherFX, will take the stage with Bob Ivins of Mindshare, who has the distinction of being the first-ever Chief Data Officer at a media agency. These two will discuss their partnership in exploring the frontier of how data can deliver real-time insights that create bottom-line value.

We’ll also hear from three of the disruptive thinkers on the Vox Media team–co-founder Melissa Bell, Chairman and CEO Jim Bankoff, and VP of Editorial Lockhart Steel (who joined the company after Vox Media acquired his Curbed LLC). They will discuss the company’s distinct approach to integrating technology into every aspect of its business, starting at the core with the creation of content through content management, delivery and monetization.

Join us at Content All Stars to gain insight into how technology can transform your media and marketing efforts and how you can transform the way you think about, develop and implement technology to power-up your content strategy.