There was a time when mainstream consumers would belly up at the cable buffet to feast on 500 channels, no matter the cost. For a time in cable tv: the bigger, the better. But eventually consumers got severe indigestion from ever-expanding bills for channels they never watched. They wondered: “Why can’t I watch (and pay for) just the channels that I actually watch?”

With the advent of streaming video packages from Netflix, Hulu, and Amazon – and more stand-alone services from CBS, HBO, Showtime, and others – consumers finally started getting the “a la carte” option of unbundling. At least they could watch just what they wanted. At the same time, new providers like PlayStation Vue, Sling TV, and DirecTV Now began to offer up popular “skinny bundles,” smaller groups of premium channels at a lower price.

As the choices proliferated for consumers, the question for content providers is how can they keep showing up on these ever-shrinking menus? They need to be everywhere, but that proves challenging for many players. Inevitably, some get left out of the musical chairs at this buffet.

And lately, the channels that are suffering are those from middle-tier programming houses like Discovery and Scripps Networks Interactive, which focus on animals, food, and reality shows. So, it is not surprising that players like these would consider M&A options. Joining forces would allow them to create a new kind of “anorexic bundle” at as little as $3 or $4 a month.

And that was likely a big driver in the recent sale of Scripps, which saw both Viacom and Discovery vying for a buyout. But in the end, Discovery won out, acquiring Scripps for $11.9 billion. It’s not just a purchase of additional content for Discovery — it’s a sizable step for both Scripps and Discovery in securing a place in media’s future.

The aim, as Variety’s Brian Steinberg put it, is for these companies to have an upper hand in the ways that consumers connect to their favorite kinds of programming. Think about Comcast’s purchase of NBCUniversal back in 2009. Comcast has since become the powerful presence behind must-see properties like the Olympics, sports, and children’s’ programming.

And that’s just one example. AT&T bought DirecTV in 2015 for approximately $48.5 billion and is about to close a $85.4 billion acquisition of Time Warner, owner of HBO and CNN. Lionsgate purchased Starz in a $4.4 billion deal. Charter Communications acquired Time Warner Cable last year for about $65 billion. The list goes on and consolidation seems inevitable in the chaos of changing viewing preferences. But will the Discovery Scripps combo be enough to get noticed by skinny bundles? Or can its own anorexic bundle attract enough attention to be viable on its own?

Both Viacom and Discovery announced earlier this year plans to offer these newer, entertainment-only anorexic bundles to try to attract consumers. But at such low prices – $3 to $4 per month – will people really value them enough?

That’s where Scripps comes along. The network has long attracted audiences — and subsequently, advertisers for those audiences — with popular lifestyle programming like HGTV and the Food Network. A Scripps acquisition, ideally, gives both companies a competitive edge when it comes to negotiating with traditional distributors like Comcast and Charter Communications. It also helps cut back-end costs. For Scripps, the acquisition also offers money to invest in better ad targeting. Ad buyers are also looking to media companies to help them better target younger audiences more prone to streaming rather than subscribing to cable.

Still, a few analysts argue that a consolidation between Discovery and Scripps — and that mergers in general — may hurt chances of staying afloat. This is because they add even more programming when distributers are looking to cut content and offer more streamlined options. And neither Discovery nor Scripps air live sports in the U.S., which has long been considered one of the remaining driving forces behind television advertising.

One analyst, Michael Nathanson, was skeptical about the pairing. He told The New York Times’s Emily Steel that, ”This shotgun marriage is a clear sign that the cable network industry has seen the future, and that future requires deep cost cutting and increased scale to mitigate both the current headwinds and the inevitable painful changes that lie ahead.”

And sure enough, Discovery’s David Zaslav touted cost savings of $350 million to The Times, and noted that Discovery could expand Scripps’ reach to 220 countries and create new services for mobile and streaming. As Zaslav told the Times: ”It is a renaissance moment for content and a great opportunity for the content business. The question is, what content is going to travel?”

That really is the question. It also remains to be seen whether food and travel channels can succesfully make the leap to the many streaming services, or make a stand with their own service. Given that Nielsen is now adding Hulu Live TV and YouTube TV to its TV ratings, the shift to streaming — and ad spending on these digital TV platforms — seems destined to only accelerate.

Now consumers will make the final decision on whether they want to fork over a few bucks for some morsels of content, or whether all these skinny bundles will add up to just another kind of bloated menu.

Streaming online content continues to grow as social media and over-the-top services appeal to more consumers, especially to Millennials and Gen Z audiences. In fact, almost half (49%) of all US consumers now subscribe to a paid streaming video services with almost 60% penetration among Gen X, Millennials and Gen Z.

Interestingly, cable and satellite subscriptions remain steady at 74% of US Households. This can likely be attributed to pay TV subscriptions bundled with Internet services. US consumer media habits are shifting significantly. To better understand these changes, Deloitte’s Digital Democracy Survey offers insight into the multi-generational view of consumer technology, media, and telecom trends. 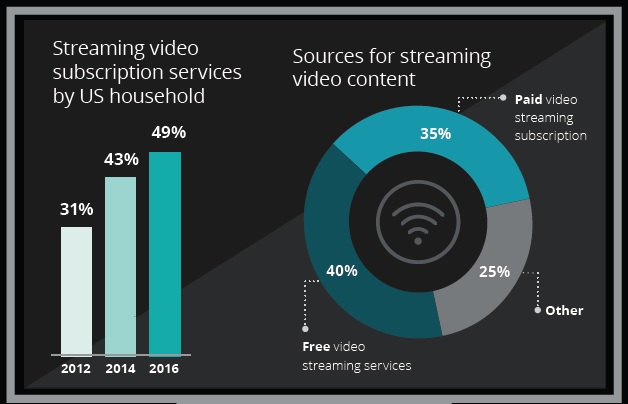 Consumers are now conditioned to watch content whenever, wherever, and on whatever device they choose. The constant availability of streaming content and social media offer new opportunities in the marketplace. Advertisers and content creators can form new relationships with the consumer, interacting with and personalizing the consumer experience. 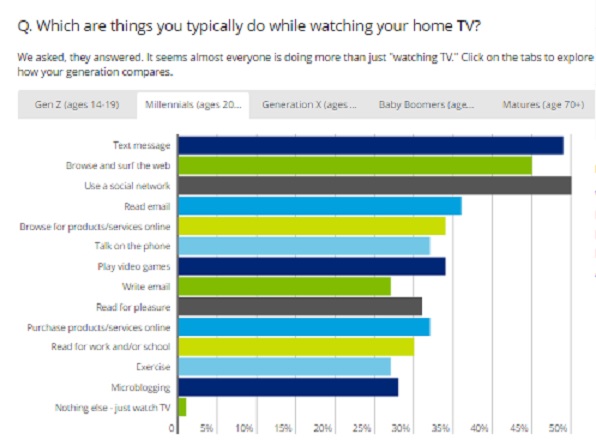 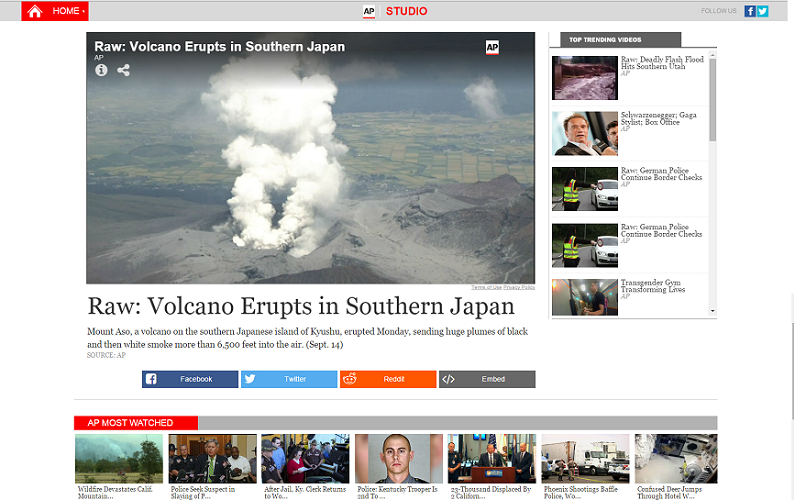 From as early as 1953, when millions of people around the world watched the live coronation of Queen Elizabeth II in Westminster Abbey in London, the need to watch an event as it unfolds has been there.

These days, live video is on the rise with news consumers increasingly expecting to see events as they actually happen. They are still looking for breaking and key news events but now they also want to see political, cultural and religious events, red carpet coverage, product launches, technology shows, sports news and more. However the television platform is far from the only place people are consuming video. Today’s digital publishers are responding to increased demand, integrating video into their websites and thereby bringing richer storytelling to their audiences.

Never before, though, has there been such experimentation in live video content. Improvements in streaming technologies and increased Internet speeds have made it easier than ever to stream live content across digital platforms, and digital publishers, approaching live video from a fresh perspective, have been quick to adapt.

It was in 2013 when digital publishers really saw the power of live video. Ahead of the birth of Prince George, AP streamed a shot of the hospital’s front door to many of the UK’s online newspaper sites. The results: a stark increase in site visitors and engagement levels that was more akin to traditional linear TV viewing times than the usual brisk online viewing. Viewers gathered online to watch and wait, be there the moment the birth was announced, and to chat with one another during this exciting event.

It’s a formula that’s proven successful time and again, with events that take days or even weeks proving incredibly popular. From full coverage of the Oscar Pistorius trial, to 24/7 coverage of the Hong Kong protests, these breaking news events have proven live video’s capabilities to attract and engage an audience on an ongoing basis.

These are the kind of events where audiences can lean forward and get real insight into the story, or lean back and keep an eye on events while continuing with their day-to-day tasks. It’s a concept we call “slow news”.

In addition, streaming planned live events – like awards shows or technology events – gives publishers the opportunity to promote ahead of time on their site and across social media to attract an audience. It also gives important time to sell advertising or sponsorship around an event.

The experimentation continues as sites try to determine what works and what doesn’t—and the fact is that there is no one size fits all for live content. Digital publishers need to see what resonates with their audience while also staying true to their brand voice. In a social media world where Facebook and other platforms are becoming increasingly important to the overall news experience, staying true to the brand regardless of the medium used to tell the story has never been more important.

The needs of broadcasters are also changing when it comes to live video, along with the audiences they serve. Not only do they now have more television channels to fill, but many of them also have a digital offering. They are reaching consumers across several platforms and audiences want a different experience on each one. As a result, live video is playing a significant role in broadcasters’ strategies and they need to remain focused and flexible in order to retain and attract audiences across all platforms.

As technology continues to evolve and consumers consider watching live news unfold with video, rather than just text and images, understanding how to develop a story with live video will become more important than ever. At AP we’re offering around 400 live events a month and we’re continuing to invest in technology and newsgathering that will ensure we keep up with the continued growth in the importance of live video news.

As technology continues to evolve and consumers consider watching live news unfold with video, rather than just text and images, understanding how to develop a story with live video will become more important than ever.

Paul Shanley (@psshanley) is director of international business development and partnerships at AP (@AP). He joined the company in 2011, as part of the team leading the business strategy for the development of AP Video Hub which launched in 2012. Since then he has gone on to drive the global strategy for the platform as well as a number of other international products, focusing on revenue growth and customer engagement.

As overall online viewing continues to, so has consumer willingness to pay a premium for content according a new study from Vimeo, “Online Video Viewing and Purchasing.” The research examines consumption habits of online video viewers today as compared with a year ago to provide insights into the purchasing habits of digital video content viewers in an effort to help filmmakers market and sell their work more effectively.

Among the nine key insights provided:

Vimeo, which conducts studies in order to provide best-practices to the community of filmmakers who sell their work on the Vimeo on Demand platform, worked with independent international research consultancy Latitude to produce the study, which surveyed more than 1,000 people in the U.S. ages 18 to 54 who self-reported as online video viewers.