According to Kantar Millward Brown’s fourth annual Getting Media Right study, 40% of marketers believe their media investments should be allocated to cross-channel and cross-device marketing, rather than any single channel like mobile or television. But less than 50% of advertisers in the study had confidence that their ad dollars are currently being effectively allocated in this manner.

It would appear that despite the seemingly endless amount of data available, advertisers still feel that gaps exist in available research, hampering their ability for decision making. And one of the biggest white spaces is in cross-platform and cross-channel data, with more than half of advertisers (61%) arguing there are gaps in holistic measurement.

Almost every marketer queried (90%) said that while their digital strategies are integrated into their overall brand strategy, most still don’t understand the impact of these strategies across channels. Seventy-four% say this is because it’s tough to maintain an integrated brand strategy in a fragmented media landscape.

For cross-channel comparison and understanding, marketers must effectively have a currency that can be utilized across all channels. But we still lack a true apples-to-apples to comparison between the old and new platforms. Traditional platforms like television and radio still primarily focus on reach and frequency metrics, while online and mobile advertising is primarily based on ROI or sales.

When it comes to measuring cross-channel performance, reach and frequency is the most widely-used metric, but it still is only used by about half of advertisers; ROI or sales is used by 47% of marketers, highlighting the difficulty the industry has had in bridging the gap between digital and traditional media. 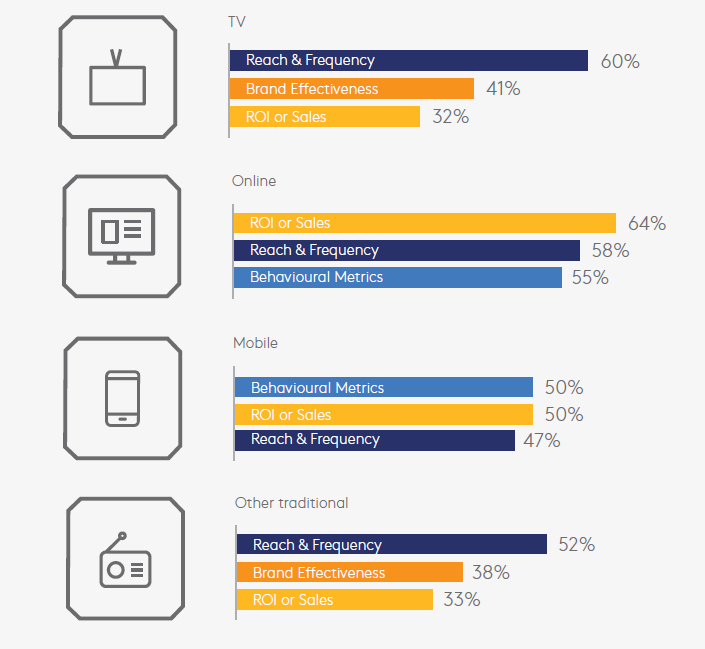 When you break it down even further, the ROI divide between traditional and digital channels is apparent. While 64% of marketers use it to measure online and half apply it to mobile, only one-third use ROI to measure TV and other traditional media.

It goes to show why attribution is so important and central to the overall health of the advertising industry. Accurate measurement leads to increased trust among marketers and their media agency partners, which leads to higher spends on advertising.

Digital advertising was supposed to be more efficient than television, print and radio, with technology giving marketers the ability to reduce waste by targeting only those who would want to buy their product.

But as we all know, now, the digital advertising industry has yet to fully deliver on that promise. To do so, unlocking understanding to cross-platform measurement is a crucial next step.

Content marketing that leverages digital video is seen as one of the best storytelling mediums by marketers and is garnering bigger, standalone budgets accordingly, yet these same brand advertising executives are challenged with justifying its ROI, according to a qualitative study— Content Revelations— from DigitasLBi and IAB, and conducted by Advertiser Perceptions.  According to the research, measuring ROI vs. other media is the top obstacle among marketers for increasing their spending on original digital video.

The report finding are summarized in an Infographic. Key takeaways include: