How has both consumer consumption of news and traffic patterns changed year-over-year? What about the role of platforms? Every October, media analytics platform Chartbeat identifies macro trends in audience behavior and news consumption to help publishers understand major shifts and discover new growth opportunities. These just released trends, rolled up from Chartbeat’s network level data from 2016 to 2017, sum up the key findings:

In looking at platform-referred traffic by device type, we see that mobile has made stunning gains year-over-year. Last year, traffic from Google had just tipped over the 50% mark for mobile for the first time ever, showing a 51% mobile vs 42% desktop split. But from 2016 to 2017, Google mobile traffic grew from 51% to 60%, and Facebook’s grew from 78% to 87%. For publishers with high dependencies on platform-referred traffic, it is significant to note that most visitors are now coming via mobile. At least for platform-referred visitors, it is practically a mobile-only world. 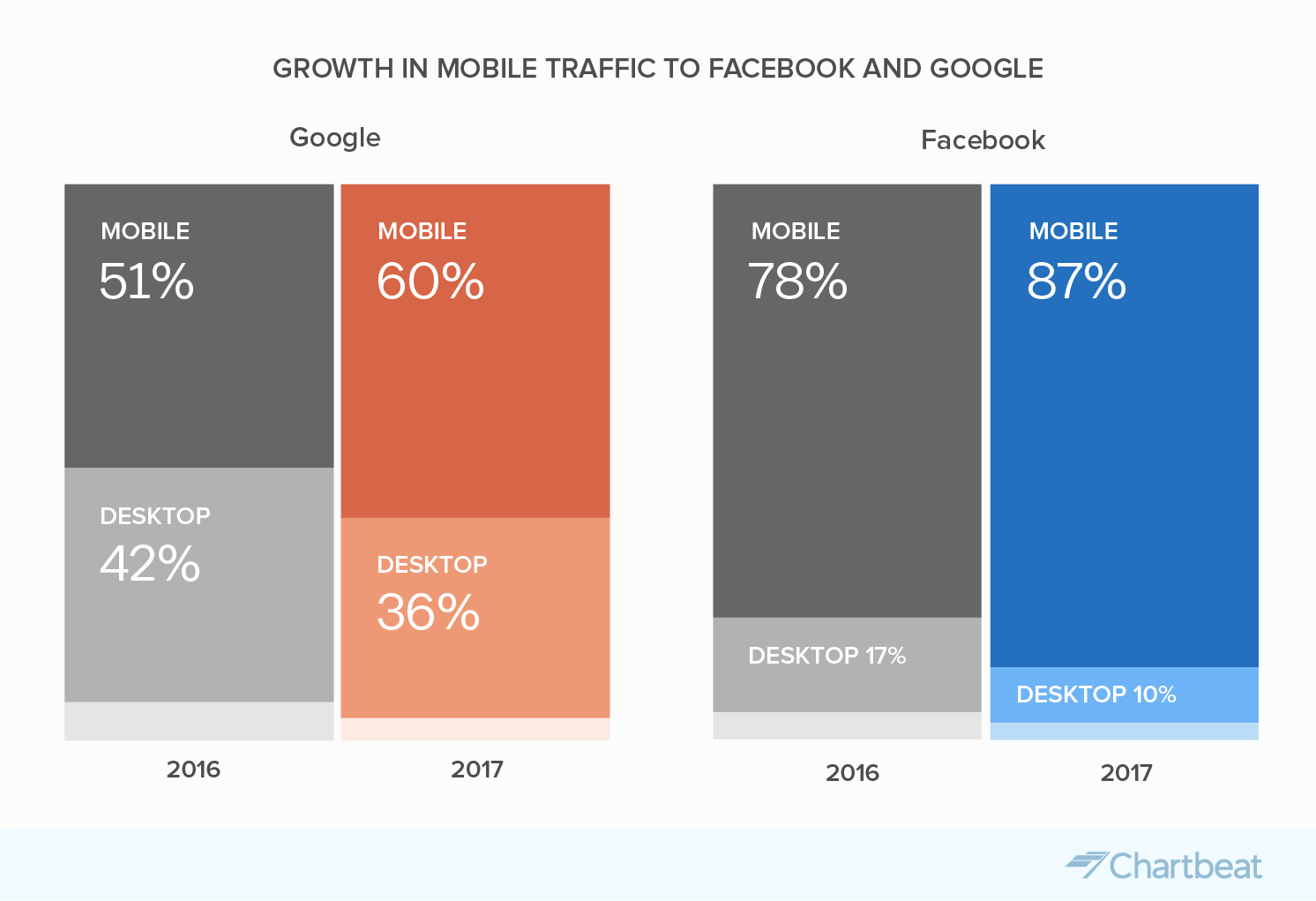 2. It’s not that Facebook traffic is down, it’s that Google is up.

Traffic that was referred from Facebook and Google to premium sites has been fairly steady over time, with Google driving roughly 1.25 billion visits per week and Facebook around 1 billion. The ebbs and flows in their traffic have stayed pretty consistent each month—until now.

Due to recent major news events including the solar eclipse and hurricane Irma, we saw traffic coming from Google escalate in unprecedented ways in September. Recent reports have described a decline in Facebook traffic, but in looking very closely at multiple data sources, we see a different picture: While it is true that Facebook’s share of total traffic is down, the missing piece is that, in fact, the pie is much larger, and Google is up.

So what does this mean for publishers? Newsworthy events, particularly those that are unfolding over time, are huge moments for search activity leading to direct traffic. Social traffic does not spike until afterwards, mainly around more emotional, reactionary content. 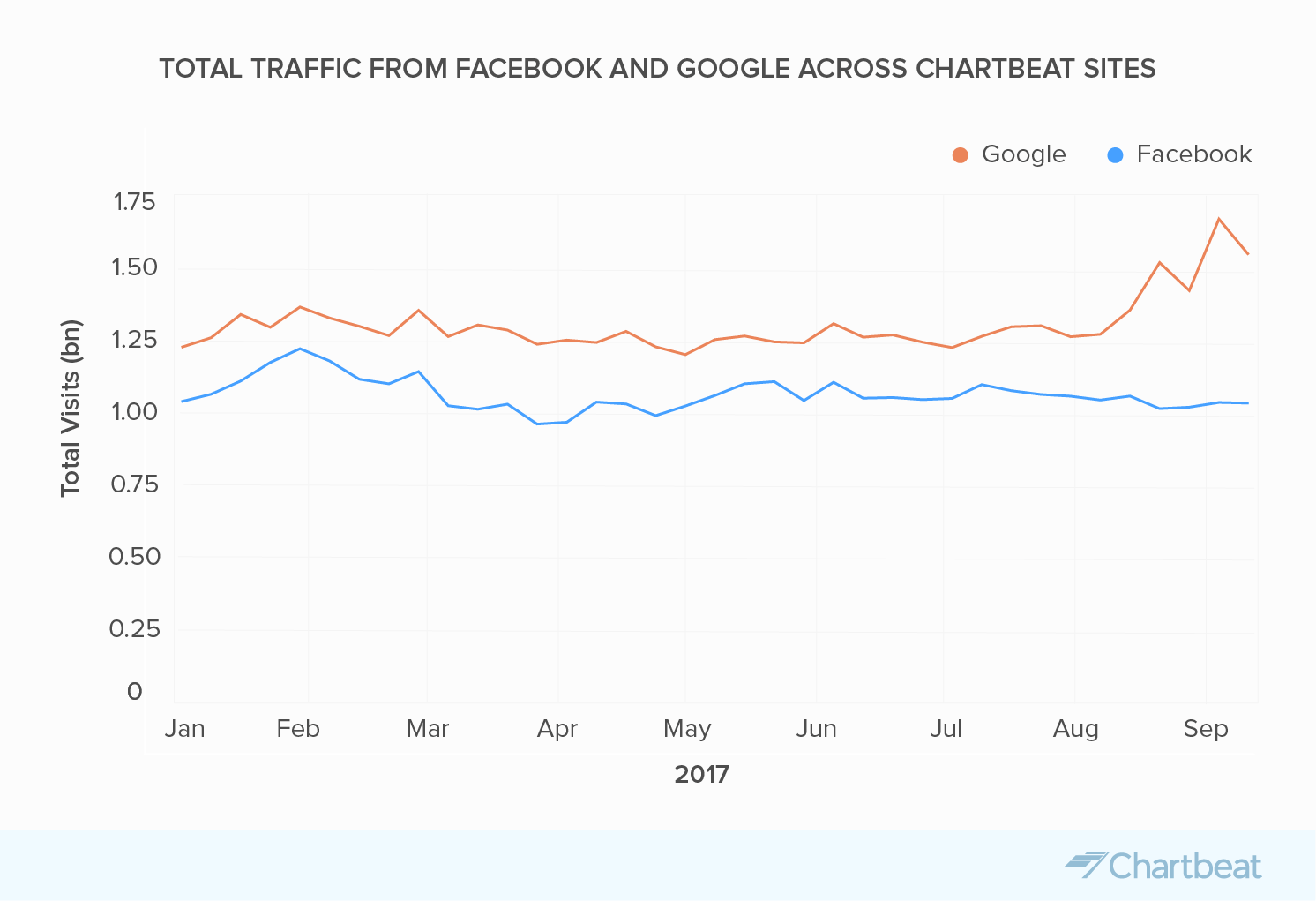 3. Demand for video is not constant; it spikes around breaking news.

In looking at consumer engagement with video content, we see that it’s much more dependent on what’s in the news than text is. Below we’re looking at how much time visitors spend watching video, relative to the time they spend with text. The first notable thing is that this line isn’t at all constant — demand for video content really changes across the year. When we look closer, we see that spikes in video watching correlate with a few highly visual stories in the news (like hurricane Irma). And that makes sense: for highly visual news, readers look for a highly visual news medium.

It is noteworthy for publishers that video demand is variable, and deeper insights here should lead to a better content strategy and smarter monetization. 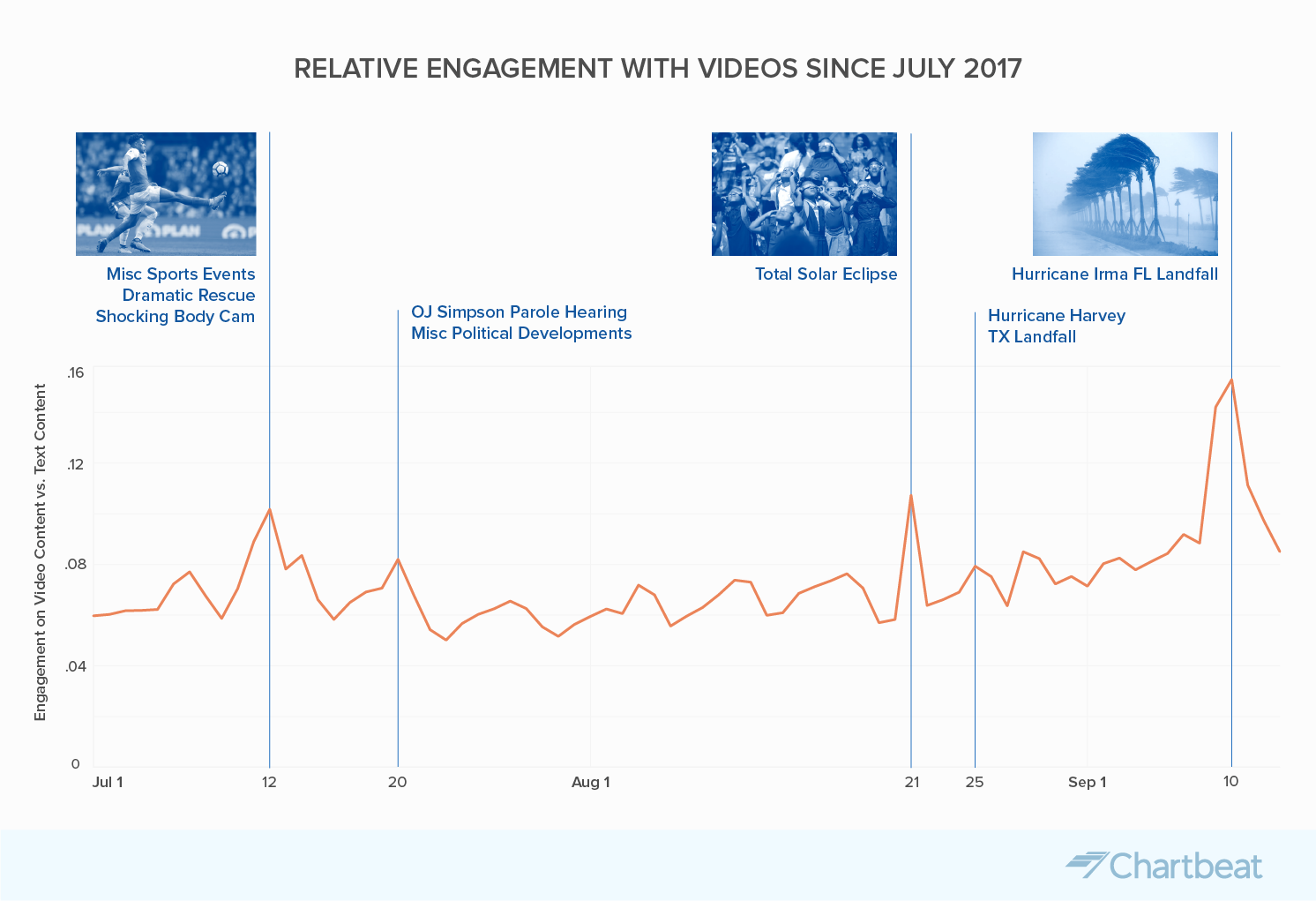 How can media companies build and grow a loyal audience? Focus on engagement.

Why is engagement as a metric so important? Chartbeat research shows that half of visitors who click through to an article hardly read what they land on: 45% spend less than 15 seconds on the page. As you can see in the graph below, a new reader who engages for a longer amount of time during their visit is more likely to return. And the more they return, the more pages they consume and the longer they read on the page. This in turn, means they also view more ads on the page. Overall, optimizing for engagement can drive loyalty, and revenue. 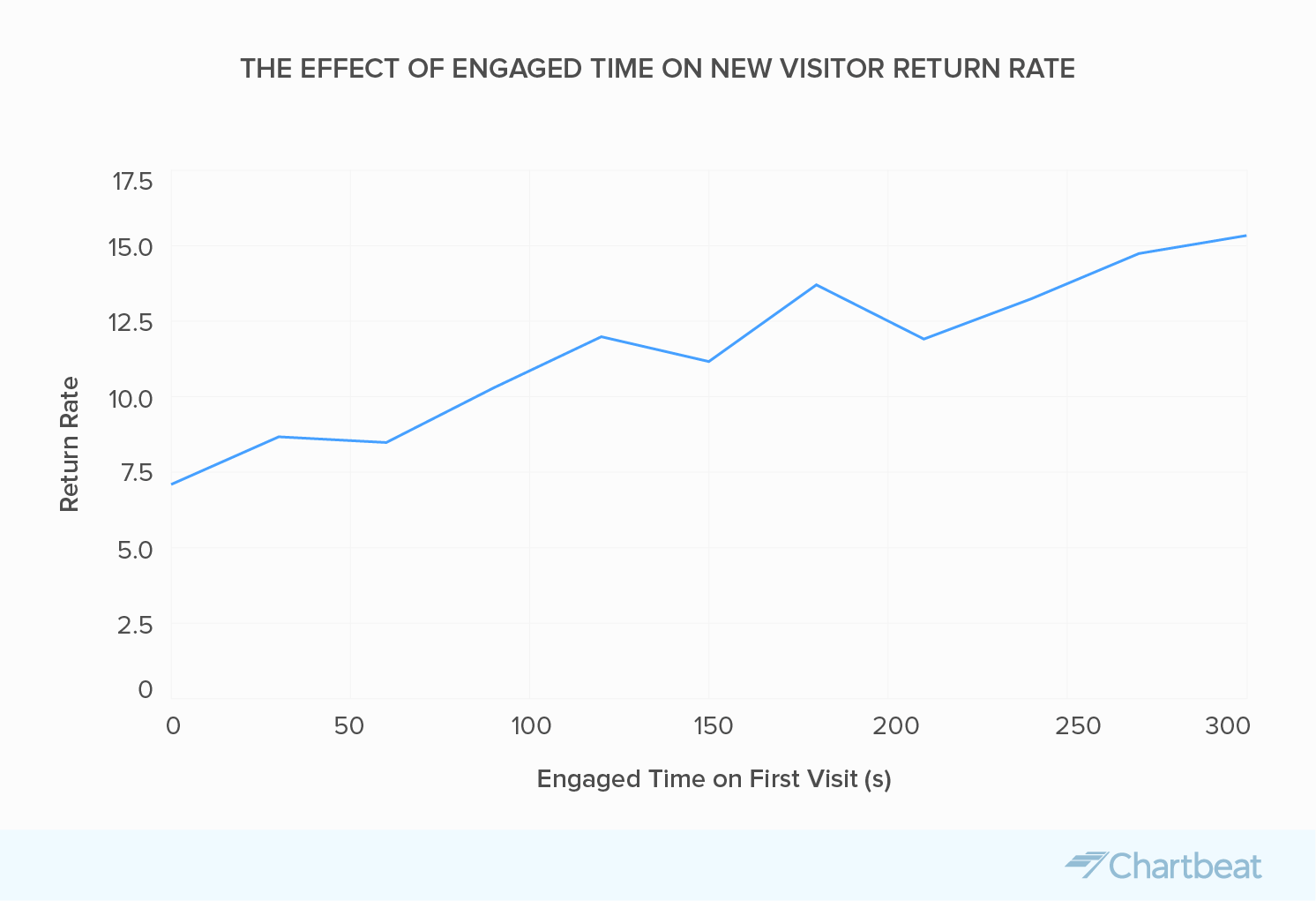 5. The homepage is not dead– it’s the place for your most vital audience.

Is the homepage really dead? Not at all. Yes, Facebook and Google are prime sources to target new readers, and those first time visitors are more likely to land on an article than a homepage. However, to our surprise, in looking at how article and homepage consumption changes by loyalty (based on the fraction of days a user visits in a two-week period), our data shows that frequently returning visitors build strong homepage habits. 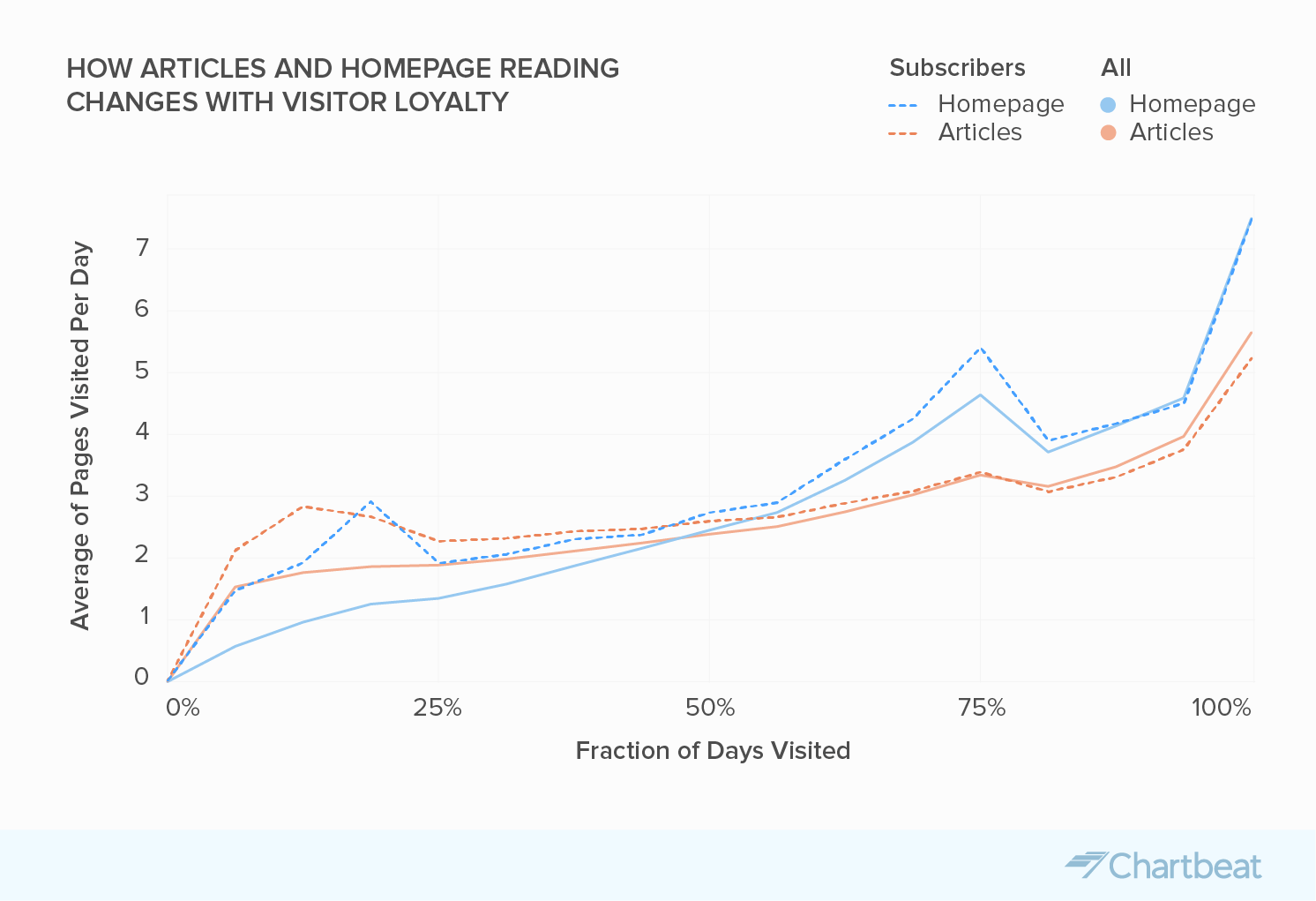 The lesson for publishers? It is becoming increasingly clear that there are different tools in the publisher toolbox as it relates to building and growing a loyal audience. While platforms are for acquisition of new visitors, driving direct traffic on your owned and operated properties is critical to retention. The homepage is more important than you might think–it’s where you’ll lose or retain your most loyal readers.

The rise of mobile devices is an almost universal constant for global digital markets, but our new comScore report, Mobile’s Hierarchy of Needs, shines a light on content and demographics that deliver particularly intense engagement on smartphone and tablet platforms.

The concept of “mobile first” has come a long way from its roots as a focus for UX design and technology-focused companies. Now it serves as a description for general consumer behavior. Over 60% of digital media time in the nine global markets analyzed (USA, Canada, UK, Spain, Italy, Brazil, Mexico, China and Indonesia) is spent on mobile. Even at this top line level, regional differences begin to emerge: The figure is 71% for US compared to 91% for Indonesia. Global markets have evolved based on local factors, with some making smartphone and tablets their primary devices.

Digging deeper into how mobile time is distributed, apps take the lion’s share at over 80% of mobile minutes. But more specifically, there are content areas within each country’s digital market in which mobile adoption has occurred at an accelerated rate. At a content category level, we can group by balance of mobile audiences and engagement to create a map of hotspots for mobile first behavior. And these, the report goes on to demonstrate, align against Maslow’s hierarchy of needs.

Here are 3 more key observations that emerged from the report:

There is no doubt that consumers are taking an increasingly mobile first attitude to digital media consumption, and understanding their hierarchy of needs on mobile can help brands and publishers to better identify opportunities and communicate with them.

For more information on the report or to how comScore can help you succeed in a mobile-first world, visit comscore.com/mobile.