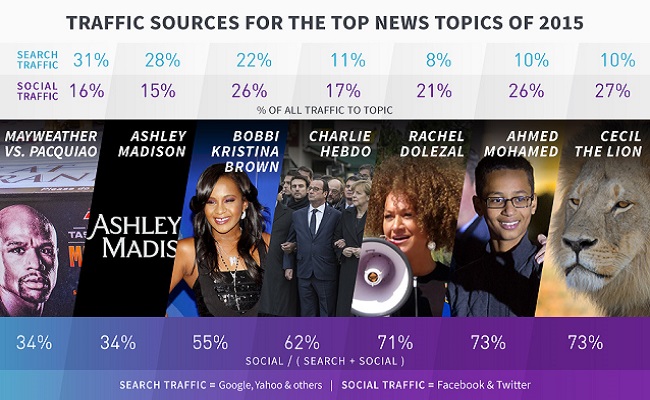 How do readers use search and social to discover top news stories?

Since the digital publishing industry has been so focused on the growth of social as a medium for news distribution at the expense of search, the Parse.ly team was curious to learn whether this held true for individual stories. So, we compiled a list of the top stories of 2015 and looked at how readers landed on them to see what patterns we could find.

For the biggest news stories this year, social media traffic dominated search referrals within our network of more than 400 media sites.

On the other hand, search traffic is bringing fewer readers to digital publishers; yet, it remains one of the top referrers to evergreen articles. Publishers who invest time and effort in long-form journalism must get to the bottom of who is reading their evergreen content and keep tabs on existing audience’s preferences and past reading trends.

Let’s look more closely at the top seven stories in 2015 to get a better sense of why (and how) this is the case:

What happened? After the French satire magazine became the target of a terrorist attack that resulted in the deaths of 12 people, the story became one of the most covered news topics of the year. Parse.ly’s network published more than 1,300 posts on the subject at its peak.

How did readers find the story? Readers chose to navigate directly to breaking news on publisher websites about the Charlie Hebdo attack. Both searching and sharing increased as the story developed, suggesting that readers still look to traditional publishers for up-to-date information on important breaking news stories.

What happened? The daughter of performers Bobby Brown and Whitney Houston was found unresponsive in a bathtub on January 31, 2015. She was kept in a medically induced coma for several months, but died in hospice care on July 26, 2015.

How did readers find the story? Social led the charge here by driving 54.9 percent of referral traffic.

What happened? This much-anticipated professional boxing match between Floyd Mayweather, Jr. and  Manny Pacquiao took place on May 2, 2015, at the MGM Grand Garden Arena in Las Vegas, Nevada.

How did readers find the story? Unlike other top news stories in 2015, the interest about the match built up long before the event — 66.4 percent of readers found articles via search engines versus social media, peaking on fight day.

What happened? In June 2015, Rachel Dolezal resigned from her position as president of the National Association for the Advancement of Colored People (NAACP) chapter in Spokane, Washington after her white parents announced that their daughter was a white woman passing as black.

How did readers find the story? Readership of this story was largely driven by social media traffic, with 71.1 percent of referral traffic to publisher sites coming in from social sites and only 28.9 percent coming in from search.

What happened? In July 2015, a Southwest African lion living in Zimbabwe was killed by an American hunter named Walter Palmer. Although Palmer had a permit, the killing drew international media attention and sparked outrage among animal conservationists.

How did readers find the story? The story attracted readers through social media. It was a smaller story that became national news because it elicited an emotional reaction and caused outrage — two reasons why some stories go “viral.”

What happened? On July 15, 2015, hackers stole the emails, names, home addresses, sexual fantasies, and credit card information of Ashley Madison customers, threatening to post it online if the site was not permanently closed.

How did readers find the story? While the topic attracted a significant fraction of social referrers, the majority of traffic came from search engines.

What happened? Fourteen-year-old Ahmed Mohamed was arrested at MacArthur High School in Irving, Texas for allegedly bringing a bomb to school on September 14, 2015. The “bomb” turned out to be an electronic clock that he had built himself.

How did readers find the story? The local news story caused social outrage, triggering national attention. There was virtually no organic traffic coming from search engines about this topic, yet readers were compelled to share articles in the context of their own opinions about the events that transpired — and this took place via Facebook and Twitter, primarily.

What did we learn?
Parse.ly’s data suggests that viral stories may be heavily reliant on shares, while more austere news stories are best discovered and distributed through search.

However, digital publishers will do well to remember that the most actionable data that they have access to is that which is found on their own sites. The aggregate trends are helpful in telling a big-picture story of traffic patterns, but where it can really help publishers is by showing them the types of trends that they should be looking for in their own content to inform their own unique content strategies.

Allie VanNest works with Parse.ly’s marketing team as Head of Communications. She spends her days telling stories about what content draws in website visitors, and why. You can reach her on Twitter @parselyallie.