Google takes somewhere between 22% and 42% of all the money flowing through its ad system, according to the unredacted version of the Southern District of New York federal case, Texas v Google, which was unsealed last week. While we knew or suspected many of the revelations, surprising new details were uncovered including internal communications that expose just how big their ambitions are the and tactics they take. The case and the supporting evidence present a chilling and calculated effort by Google to squash all competition. There is much to unpack in the newly released documents, but I’ll focus on three aspects that jumped out to me.

It has always been unclear how much Google charges when it is involved with an ad. However, the recent evidence shows that they charge on all sides of the transaction — and they charge a lot. The suit lays out the scope of Google’s ad business: “Google operates the largest electronic trading market in existence.” In fact, it appears that 75% of all ad impressions in the United States were served by Google’s Ad Manager. In Google’s words, “more daily transactions are made on AdX than on the NYSE and NASDAQ combined.” Eleven billion online ad spaces each day.

And, because of this dominant position on all sides of the market, Google can charge monopoly rents. Most ad exchanges charge a take rate of four to five percent of ad spend. Google takes 22 to 42 percent. And, on top of that, Google charges another 10% if a publisher wants to divert inventory outside of Google’s system.

Oh, and that’s just on the sell side. The suit lays out similar predatory fees and anticompetitive practices on the buy side as well.

When “header bidding” came along, it offered publishers the ability to make their ad inventory available to multiple ad exchanges simultaneously, fostering competition and innovation. Publishers hoped it would give them greater flexibility to monetize their ad inventory and increased leverage to negotiate better deal terms – something that would have resembled a healthy marketplace. Apparently, the very notion of header bidding hit hard at Google’s core.

As noted in the evidence, Google identified header bidding as an “existential threat.” In the unsealed complaint, we see that one of Google’s most senior executives declared eliminating the threat his top priority, which merited an “all-hands on deck approach” for the leadership team.

Then, in a stunning play to protect its dominance, Google struck a covert deal with Facebook. At the time, Facebook was actively considering getting into the header bidding space, which would have put them on a direct path of competition with Google. However, both companies recognized that they had more to gain by fixing the market for themselves than by competing openly.

The unsealed evidence reveals that a senior Facebook executive understood why Google wanted the deal: “They want to kill header bidding.” That’s a clear quid pro quo around an alleged violation of Section 1 of the Sherman Act. This could translate into criminal charges, depending on how the courts see this evidence.

Google also promised that Facebook would win a certain percentage of auctions in open bidding, Google’s alternative to header bidding. In return, Facebook promised a minimum spend and bidding frequency. They also capped the number of line-items that publishers could use, which severely hindered publishers’ ability to use header bidding. Google likely figured that it would pressure publishers to use open bidding instead.

Finally, after pushback from Facebook, Google agreed to remove the ability for publishers to set a floor price for their inventory. In Google’s ad marketplace, which was already  stacked against publishers, this tilted the playing field even further in favor of Google and Facebook.

AMP, the offer publishers could not refuse

Google created a new format for content creators called Accelerated Mobile Pages (AMP), which was pitched as a way to improve the consumer experience on mobile. Not coincidentally, Google announced that it would start giving priority to AMP pages in search results, which gave the Google-led project a path to fast adoption. Essentially, Google made an offer that no publisher could refuse: Use AMP or lose the ability to be found via the dominant search engine.

Despite Google’s claims, there are multiple benefits for Google’s business baked into AMP, as well as downsides for publishers:

All this new evidence shines a bright light on a pattern of behavior by Google to close off competition at every turn. Suffice to say that the harm to publishers has been dramatic. Google’s goal was not to build better products or services. And it certainly wasn’t trying to improve the overall health of the advertising ecosystem.

In these unredacted transcripts, we see the details of Google’s anticompetitive strategy articulated in Google executives’ own words. Their goal was to choke out competition: by killing off a new technology that would have improved the health of digital advertising; by cutting a deal with Facebook to rig the market; and by forcing publishers to use AMP.

I expect this case will only get more attention going forward. We are likely to see additional private suits filed as competitors realize they were conned by Google (and Facebook). I suspect we will see additional states join this lawsuit or file similar suits as it is clear that consumers were harmed by a dysfunctional market.

Finally, many speculate that the Department of Justice could add its considerable weight to this fight as soon as Jonathan Kanter is confirmed as the head of the antitrust division. Given the scope and impact of this case, we welcome any and all help to fight one of the most brazen examples of anticompetitive behavior in recent memory.

Though sometimes it seems like we’ve been talking about it forever, Facebook became a leading referrer to publishing websites only in mid-2015, according to Parse.ly data. Around that same time, other news broke that was poised to impact traffic drivers: Google officially launched AMP.

Today, the two news stories again converge. We’ve seen Google take the “referral king” crown back, with Google accounting for 44% of traffic to our network, and 12% of external traffic to media sites specifically coming from Google referrals AMP pages. 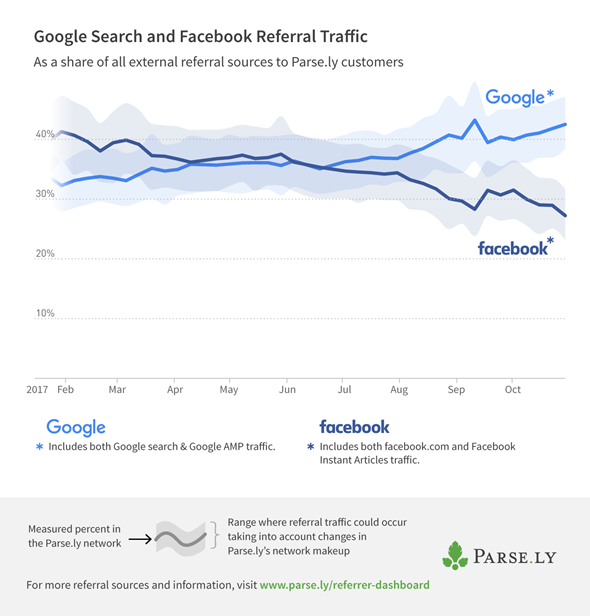 We can thank supply and demand for some of this. According to Google, there have been more than four billion AMP pages published and over 25 million domains creating AMP pages. Google purports that AMP brings benefits that can explain the rise in referrals. The web giant commissioned a study that shows that “AMP leads to a 10% increase in website traffic with a 2x increase in time spent on page. For e-commerce websites using AMP, the study also found a 20% increase in sales conversions compared to non-AMP pages.”

While these numbers point to a fairly big success for AMP so far, multiple causes likely contribute to the big picture numbers. Some of this shift to of referral traffic back to Google, AMP or otherwise, may be result of user preference for broader sources of information. Digital Content Next’s recent research showed that consumers have low levels of trust for news they get via social media, which could be a contributing factor. And perhaps the decline in Facebook as a primary driver of publisher traffic reflects Facebook’s desire to keep people in their app to try get a grip on the shifting tide of awakened media consumers.

However, it definitely shows the success of Google’s ability to sell AMP as a non-proprietary solution, versus Facebook Instant Articles. In short, development work done for AMP isn’t constrained to one audience or platform. Our research on referral traffic to publisher websites shows that the additional benefits may be mounting. 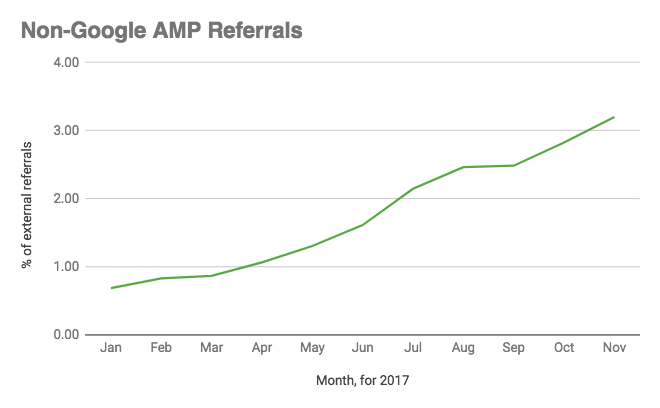 Adoption of AMP, it seems, has not just been embraced in Google searches but more broadly across the web. Over 3% of visitors to our publishing network visit through AMP off of Google, from sites like Twitter, Pinterest, and LinkedIn. For context, all of Twitter’s referrals to publishers’ websites only accounts for 2.5% of total external referral traffic.

Whatever the cause, for publishers still considering the adoption of third-party distribution channels, or considering their continued support in 2018, understanding these numbers for your site and for the industry should play a role in decision making. Audience acquisition, engagement, and retention through them becomes not just an editorial strategy, but a product development one as well.