In the last few months, ad blocking has taken a backseat in industry conversations and in the minds of publishers as they grapple with more immediate concerns, such as the revenue disruption caused by Covid-19 and Google’s decision to block third-party cookies by 2022.

Even though it doesn’t feel quite as pressing, ad blocking is probably a more persistent threat to publisher’s revenues than either of the aforementioned. In this article, we’re going to review the current state of ad blocking, see how publishers can estimate their revenue leakage, and discuss the pros and cons of the commonly available ad block countermeasures.

The state of ad blocking

According to the Global Ad-Blocking behavior report by GlobalWebIndex, 47% of users globally use an ad blocker today. There are many reasons why users choose to install ad blockers, such as constantly being bombarded with ads, the ads being annoying, irrelevant, or intrusive, and ads taking up too much screen space. There are also region-specific drivers of ad block usage. For instance, the mobile ad blocking rate is especially high in the APAC region. That’s because many users access the internet using 2G networks, and saving data bandwidth is a priority.

According to predictions made by Ovum, the revenue loss to publishers could be anywhere between $16 billion to $78 billion in 2020, depending on how actively publishers adopt (or don’t adopt) ad block countermeasures. Industry groups such as the Coalition for Better Ads help stakeholders in the ad tech industry align towards the long-term goal of making ads faster and less intrusive. But for now, most publishers are left to their own devices when it comes to figuring out how much revenue they’re losing and what they can do about it.

Once you have some basic information about your website, it’s actually pretty straightforward to estimate the revenue loss that you may be currently incurring. Here’s what you need:

There are both free and paid JS scripts and analytics tools available in the market that you can use to track the percentage of ad block users among your visitors. If you just want a rough estimate, you can also review your country-specific traffic data and then apply the regional ad block rates to calculate the average adblock rate for your entire inventory.

It’s important to note that revenue loss due to ad blockers grows in direct proportion to traffic. So, it may not be worth the effort for a publisher with less than 1 million monthly PVs to implement ad block countermeasures. However, larger publishers cannot afford to ignore the opportunity.

Have you ever visited a site that asked you to turn off your ad blocker? That’s an example of a messaging-based ad block countermeasure. Whitelist requests are another example of this category of ad block countermeasures. Other variations include calls-to-donation, offering an ad-free pass, or selling a paid subscription with metered or unmetered paywalls. All of these are intended to offset the revenue loss caused by ad blockers. Messaging is a great way to establish one-on-one communication channels with your visitors. You can educate them about your business needs, and ask them to take specific actions to support you.

In response, ad block vendors frequently update their code to bypass circumvention. This makes ad block circumvention less reliable as a technique than other forms of ad block countermeasures. Circumvention also ignores the underlying problems that cause users to install blockers. And, for this reason, the vendors that provide this technology have fallen out of favor in developed markets.

Almost half of all internet users who use ad blockers use AdBlock and AdBlock Plus. The German company that makes these products, eyeo GmbH, runs a program called Acceptable Ads that allows publishers to serve less intrusive ad formats to a segment of opted-in users of participating ad block extensions, browsers, and content blockers. Ad recovery was envisioned as a middle ground between the legitimate needs of internet users and the business needs of advertisers and publishers. In terms of effectiveness, ad recovery usually beats messaging. That’s because it allows publishers to recover a larger part of their inventory, instead of just relying on the users who agree to grant their whitelist request or buy their ad-free pass.

If there’s one thing that we can all agree on, it’s that ad blocking is here to stay. Users have more choice than ever when it comes to installing an ad blocker, whether that’s in the form of a native feature of privacy-focused browsers, third-party extensions, or mobile apps. The specific usage patterns on different devices may wax and wane over the years. But as a fundamental choice, ad blocking is now a permanent fixture of the ad tech landscape.

When ad blocking usage first took off, publishers did not have a lot of options to protect themselves against the cost of ad blocking. However, over the years, different forms of ad block countermeasures have emerged, which work with varying degrees of efficacy. The long-term solution to ad blocking still lies in respecting user choice and making advertising simpler, faster, and less intrusive. Until that happens, publishers need to keep experimenting with ways to protect their revenue by educating users and delivering better advertising experiences.

Consumers who use ad blocking software are also more likely to say advertising is important to their purchasing behavior. Surprised? You might also be surprised to hear that—overall—consumers believe that digital advertising is improving. Unfortunately, there’s still a long way to go.

That said, today, one out of five adults report using an ad blocker all of the time according to Kantar Media ‘s DIMENSION 2018 research. And it’s not just younger adults using ad blockers. The proportion of adults 45 to 64 who block ads is almost at the same level as those aged 18-34s. It’s also not just heavy tech-savvy users blocking ads. Twenty-three percent of heavy users report always blocking advertising content compared to 21% of all connected adults. The Kantar research surveyed 1,000 Americans and 5,000 in Brazil, China, France and the U.K.

Importantly, attitudes toward advertising appear to be changing for the better. Nearly three-quarters of online adults feel that that “advertising is changing for the better, or not changing at all.” Unfortunately, consumers report that targeting practices are misaligned with a positive online advertising experience. Seventy-two percent of consumers say that “sometimes I see the same ad over and over again, it’s too repetitive.” Further, more than half of online consumers (56%) report to frequently seeing ads for products they’ve already purchased. 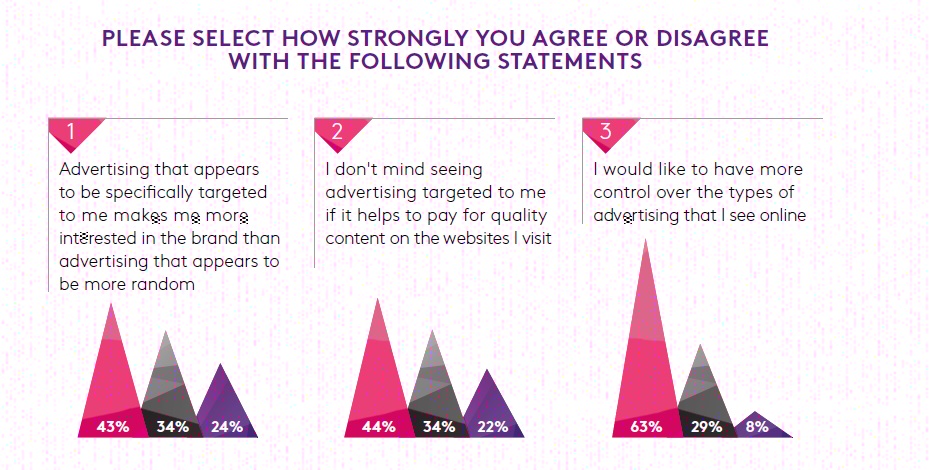 Control seems to be a key theme in online advertising, particularly in ensuring relevance. Approximately, 63% of those surveyed say that they would like more control over the ads they see online. Just over two-fifths (43%) report their willingness to share personal information for a more relevant advertising experience. Targeting as we know it today with third-party data streams and cookie collection is not the holy grail. There’s still a window of an opportunity to improve the online ad experience and engage users.

Mobile is an ever-increasingly important platform in digital publishing as consumers spend more time on their devices. In fact, three-quarter of publishers (75%) stated they will increase their mobile investment in the next 12 months, reported AOL’s 2016 Publisher Outlook Report, which surveyed 300 publishers in the U.S.

And rank their primary challenges as:

Distribution platforms for content have also emerged this year. Companies like Facebook, Apple, Twitter and Snapchat are all trying to attract readers to keep using their platforms while consuming publisher’s content. Over 90% of publishers believe distributed media has had a positive effect; 53% report it’s “extremely positive.” By and large, publishers also said that syndication is vital with approximately 25-50% of their traffic coming via syndication referrals.

More and more publishers are increasingly assessing new and alternative monetization strategies beyond advertising. For now, more than 75% of publishers pursue subscription and ad supported business models. Of those focused on subscriptions, over 75% expect to grow their subscription choices in the next 12 months.

Publishers continue to evolve with the times, building new technologies, developing new revenue sources and even creating internal agencies to develop new creative. Publishers must continue to re-think how people are consuming content, how to deliver it, how it lives across platform and how to monetize it beyond advertising dollars.