Digital advertising fraud continues to be an industry-wide problem. Estimates of dollars lost to fraud range from $6 billion to $16 billion annually. Much of the conversation has been on preventing fraud in open ad exchanges on a national level. But digital ad fraud can affect anyone who buys and sells digital advertising, including local and national publishers and advertisers.

With local markets becoming a target, the ad fraud crisis might seem to be spiraling out of control. But there is hope. The war on ad fraud is winnable. National and local marketers have the power to steer their budgets toward legitimate websites with human audiences. But how do we get there?

Here we unravel this often confusing and complicated topic to uncover how ad fraud is affecting local markets and what publishers can do to minimize its impact.

Fraudsters go where the money is. This year in the U.S., mobile ad spending is expected to surpass television advertising. Pair this influx of money with a platform where anti-malware and ad fraud detection is immature or non-existent, and mobile advertising platforms and local markets become prime targets for ad fraud.

How does local ad fraud happen?

Bad actors exploit one of the strengths of local markets: local audiences. Recent research from BIA/Kelsey estimates that out of $76 billion in local ad spending, almost $3 billion is lost to geotargeting ad fraud annually. Marketers want to reach their audiences on their mobile devices when they are in specific locations. Fraudsters take advantage of the appeal of geotargeted advertising by faking a device’s location. This means ads run on “devices” that declare GPS coordinates, but that data can be easily faked, allowing fraudsters to steal from locally targeted ad budgets.

The ad campaigns specifying these two geographic areas were successfully executed by the programmatic exchanges, but the results were not logical. For example, 100 percent of the ads were loaded on Android devices and all ad impressions were generated at 5 a.m. Houston time and 4 a.m. Bozeman time. These findings, 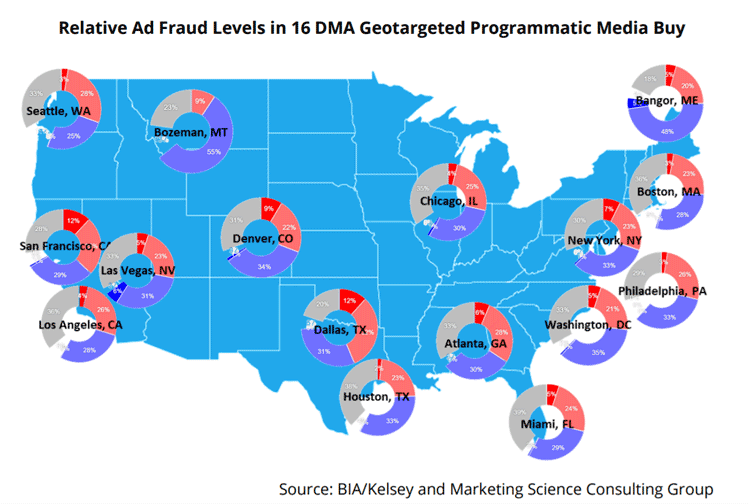 among others, show that the app usage in these campaigns did not follow the patterns of typical human behavior and were the result of fraudulent activity.

This initial test was expanded to include the geotargeting of 16 DMAs through programmatic media buying. While there were variations in the levels of fraud between DMAs, the results showed similar rates of ad fraud (shown in dark red on the following chart) throughout all 16 markets.

“Local publishers have real audiences—the people who live and work in the communities and consume the content they create,” explained Fou. “Marketers need to understand the risks of ad fraud in geotargeted campaigns and consider spending their ad budgets directly with local publishers to avoid those risks.”

What can publishers do?

Legitimate local publishers work hard to create quality content that attracts real human audiences. Publishers who can prove that they have quality, human audiences will be the winners as marketers look to reward those who proactively combat fraud.

Knowledge is power. As more money is spent to reach local audiences, publishers must pay attention to how ad fraud is occurring in their markets and demonstrate that their sites are safe places for advertisers. Understanding how ad fraud occurs and explaining to marketers the issues that make them vulnerable is an important first step, but more action must be taken.

Here are a few steps publishers can take to bring us closer to minimizing ad fraud in the buying/selling process:

Know your business practices for monetizing your site, sourcing traffic and choosing vendors, and educate your staff on best practices. Steps to providing transparency include implementing Ads.txt and having a third-party audit.

Implement tech to prohibit ads from being served to known bots.

If you want to learn more about what you can do to help, download the AAM white paper Three Truths to Confront the Digital Ad Fraud Crisis. By looking deeper into ad fraud and how transactions take place within the ecosystem, it’s clear that ad fraud – on both national and local levels – is conquerable.