What would the web look like without Facebook? Chartbeat had a glimpse into that on Aug. 3, 2018, when Facebook went down for 45 minutes and traffic patterns across the web changed in an instant. What did people do? According to our data, they went directly to publishers’ mobile apps and sites (as well as to search engines) to get their information fix. This window into consumer behavior reflects broader changes we see taking hold this year around content discovery, particularly on mobile. And this is good news for publishers.

Despite volatility driven by algorithm shifts and intense news cycles, user demand for content (represented by traffic across the web) is quite stable. But the sources of that traffic are anything but static. In fact, we’ve seen a major reversal in the specific sources driving traffic to publisher sites in the last year. 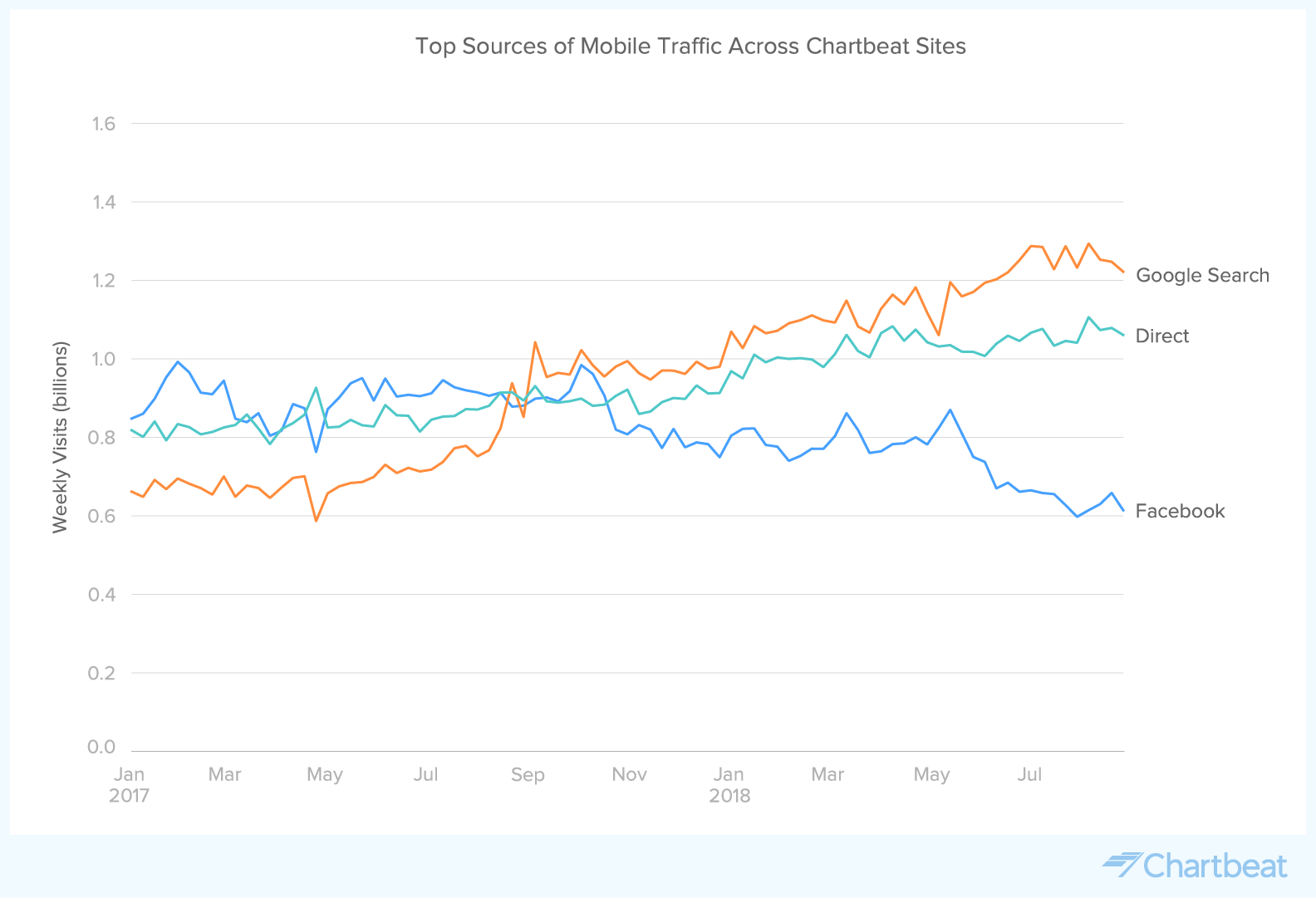 Built-in portal apps aren’t the only apps to watch; publisher-owned news apps are also making a comeback. According to the Digital News Report 2017 from Reuters Institute, weekly use of news apps in the US was up roughly 40% in 2017. And Chartbeat data shows that app users are not just consuming more content, but they are also an incredibly loyal audience – 5.7x more loyal on average than visitors who arrive from platforms like Facebook and Google.

All of which makes the Aug. 3 Facebook incident even more interesting to observe. 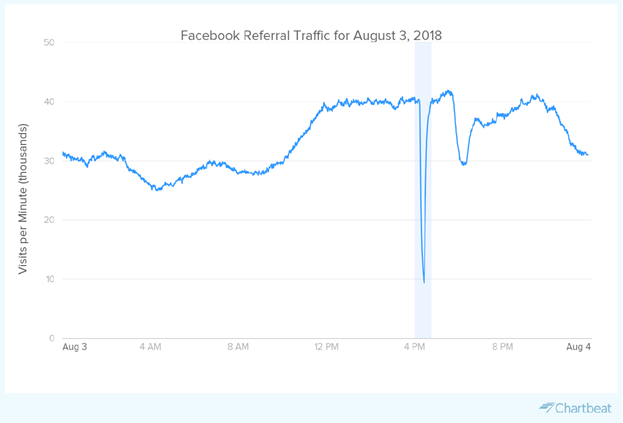 Chartbeat analyzed the Facebook outage using global traffic data across a sample of more than 4,000 sites, and presented a summary of what happened at the ONA conference. Key data points show that when Facebook went down, referrals to news sites fell as expected, but other activity more than made up for it. 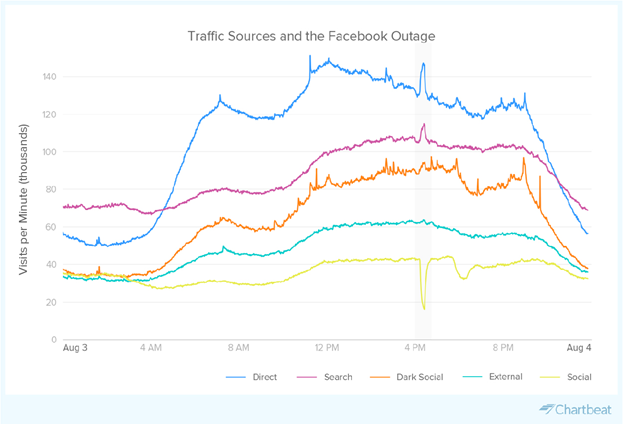 One of the fascinating things we noticed in the data was just how instantaneous the reaction was. When Facebook went down, it took only seconds to break the habit. Habitual Facebook usage is so intertwined with mobile usage, however, that it is hard to say what would really happen in a Facebook-absent world. Would mobile consumption be the same without it?

Facebook drives a tremendous amount of traffic to publishers, but at the same time, it also competes in terms of consumer time and attention. It is heartening to see that when Facebook is temporarily out of the picture, consumers still seek out the stories they want— and this is good news for publishers.

In the past year, while the dialogue around platform traffic focused on the decline from Facebook, Google was quietly executing on a tectonic shift towards mobile. In February, we commented on the dramatic increases in traffic from AMP pages as well as Google Chrome Suggestions. More recently, Chartbeat has observed sizable traffic increases to publishers from Google News and Google Search as well. Let’s check out the data. 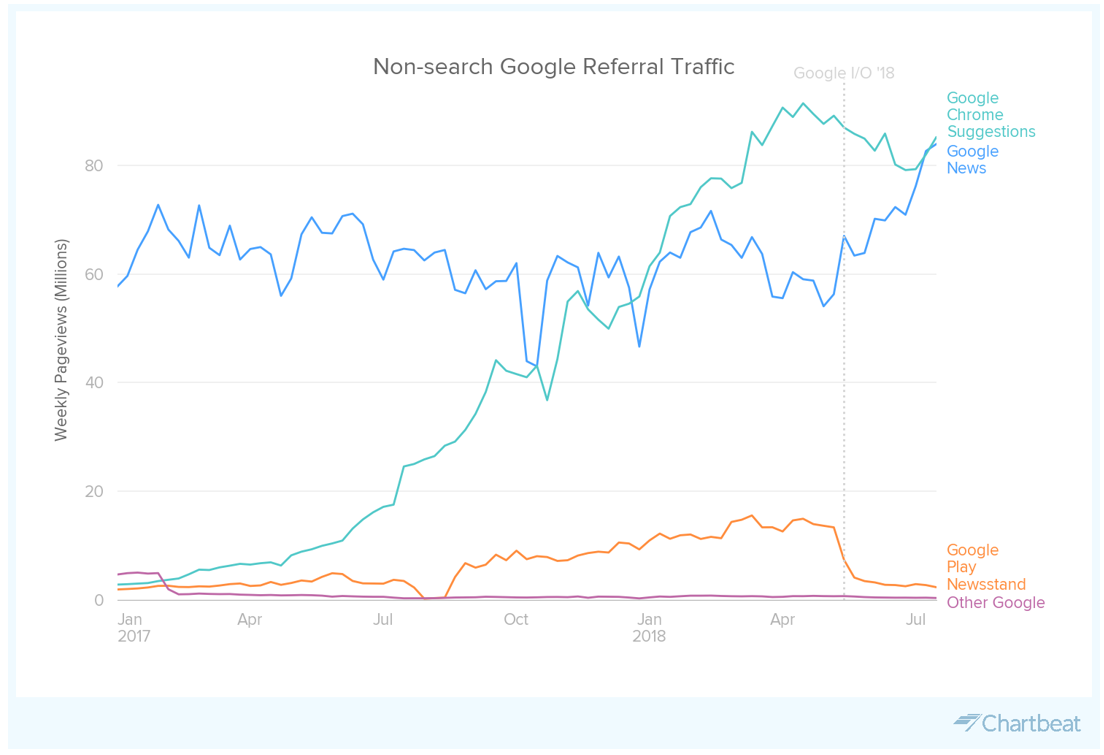 Google Search sends billions of pageviews a week to publishers’ sites. We’ve seen large fluctuations in traffic over the past few months, but only recently have we seen a steady increase in mobile traffic.

Chartbeat is tracking a clear and substantial change in Google Search traffic in the June-July time frame, as seen in the graph below showing total aggregate traffic from Google Search on desktop and mobile. 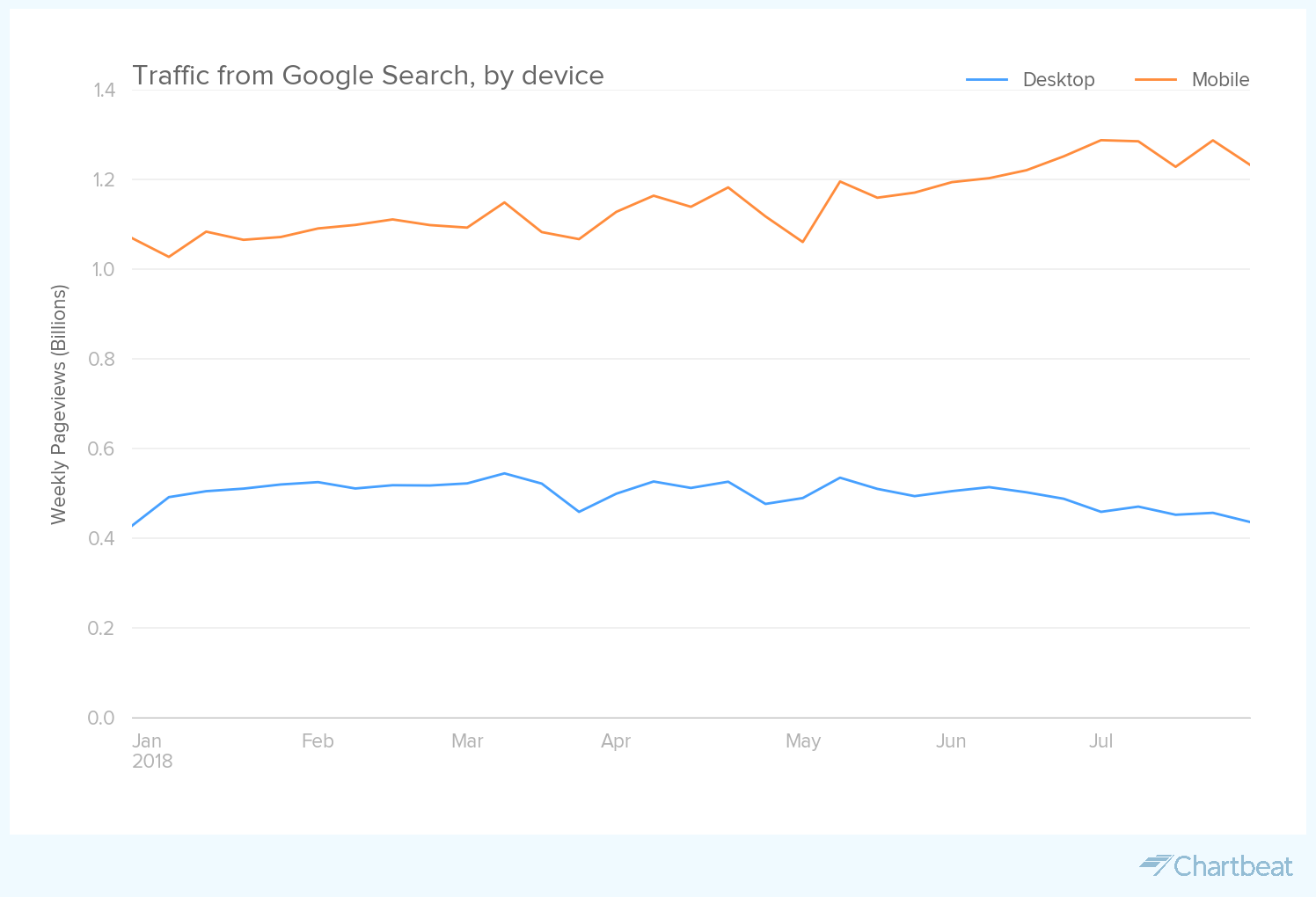 Because the mobile increase was larger than desktop’s decline, overall we’ve seen a roughly 5% increase in total traffic coming from Google Search. Additionally, a strong majority of publishers have seen their traffic rise. In fact, 71% of websites in our aggregate base saw their total Google Search traffic increase in June-July. 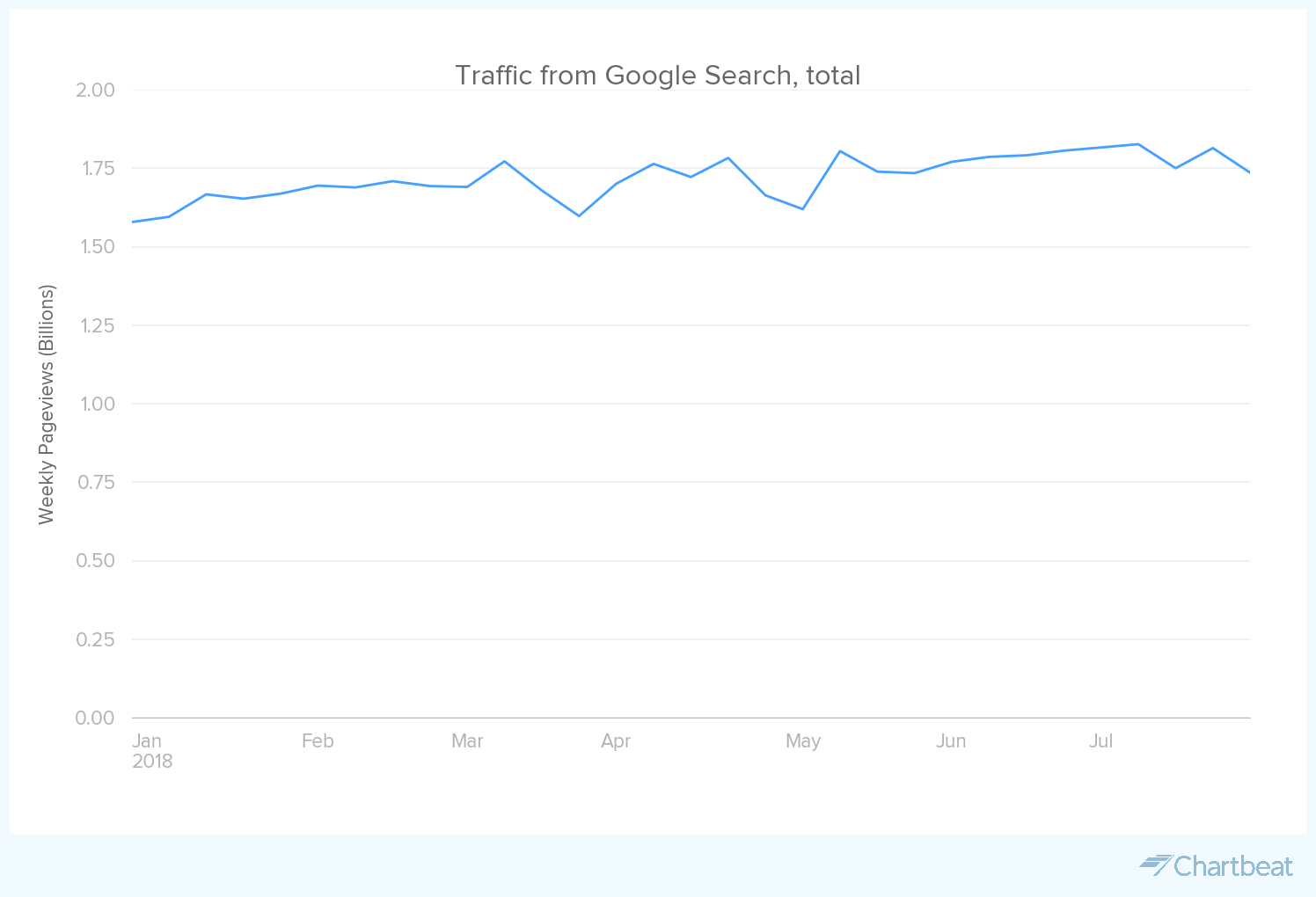 Why the rise in traffic?

It is hard to pinpoint the reason for these increases. Earlier this year, Google announced that mobile-related algorithm changes were coming in the June-July. The timing coincides, but it is hard to tie the traffic changes conclusively to these algorithm shifts. While mobile-first indexing does not affect ranking, it does mean that Google indexes a different mix of pages, and this change potentially could alter the norms around content discovery. The page-speed ranking change that prioritizes fast-loading, mobile-friendly pages may also have had an impact on traffic, but this doesn’t seem to add up. Notably, in our Chartbeat data we have not seen a correlation between publisher page load time (overall or on mobile) and changes in Google Search traffic.

Google’s relaunch of Google News and transition to a mobile-first Google Search are impacting traffic to most publishers and offsetting the desktop-mobile mix. As Google accelerates quickly towards mobile, they are quietly and subtly altering the way the world gets its news and information on the web, but the implications of these changes are still unclear. With over 70% of Google Search traffic to publishers now coming in on mobile devices, publishers may find that while mobile no longer equals social— for good or for bad—it may require more reliance on Google.