To many, it would seem that Jarrod Dicker had a dream job running the innovation team at The Washington Post. He led one of the most experimental journalism shops in the country with the backing of Amazon founder and CEO Jeff Bezos. While Dicker recognized his good fortune, he also saw room for something more – something you might not even find at one of the most progressive publications around. He saw a hole that needed to be filled and that maybe the blockchain would be the right fit.

That’s why last February, Dicker quit his job at the Post to become the CEO of Po.et, a publishing blockchain startup. It was a company offering a publishing model so fresh and compelling, Dicker simply couldn’t resist.

The attraction? A chance to create a way out of the revenue box the publishing industry is in.

Dicker had been working on building a new ad model at the Washington Post, but he recognized that approach would only get him so far. “What we were doing at Post was first step toward building new vision of the media industry,” he said. However, he knew it was going to be very hard for one publisher to change the revenue model for an entire industry.

Like many, he questioned whether it was possible to survive long-term with the current advertising model, particularly in a world of poor advertising experiences, where consumers increasingly opted to use ad blockers. Dicker thought that there had to be a better way – and that might just be the blockchain. 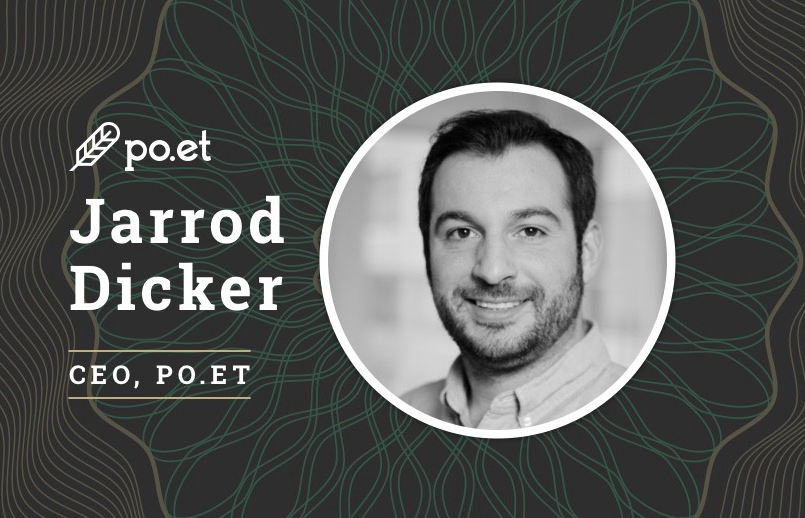 The blockchain may seem like a strange savior, but Dicker suggests we consider the full utility of an immutable, irrefutable record. If you could prove ownership and perhaps even truthfulness beyond a shadow of a doubt, maybe you could shift from the ad model to one where revenue comes directly from content consumers.

He says that Po.et is working today as a technology layer where creators can place ideas and, using programming hooks, build licensing and revenue models on the platform. “If someone created content, they can create proof of work and attribution and manage permissions all on the platform. Then they can share a public key and anyone can use it, or if it has value they can charge to unlock it,” he said.

The company started with a set of open source tools that publishers and individuals can tap into to build applications that take advantage of the platform. “If you are a publisher and your content goes through Po.et., you can define when and how to share your content based on rules and permissions. If the permissions rules are broken, there are indicators to warn you, and that brings smarter and more efficient ownership to this space,” he said. It also frees the content owner from using ads because the value is based on the content itself, rather than on an ad model.

The promise of this approach is a sophisticated licensing mechanism that takes something like Creative Commons and allows content owners not just the ability to apply their license/sharing method of choice, but also a mechanism to enforce it. This enables Po.et to act as a marketplace where you can attach a license to your content that requires people to pay a fee to use it. Then the platform will handle the transaction for you based on the rules and permissions you have applied.

The whole idea is egalitarian in a sense. It puts the revenue power in the hands of the content owner or publishers. However, as we have seen in the last couple of years, that which is open and free is also subject to gross manipulation by people or nation states with an agenda. What’s to stop people from gaming the market?

Dicker sees the marketplace itself as the defense against such abuse. As such, he wants to avoid having some sort of formalized policing method. “Policing the platform is going against what’s happening with a decentralized [system] and blockchain. If people have to stake tokens, dollars and reputation, there is more value with this incentive,” he said. He believes this buy-in and the nature of the blockchain itself will help prevent any abuse of the platform. “That’s the beauty of the blockchain. Everything is on the ledger and everyone can see whatever is happening,” he said.

He still plans to find ways to keep the marketplace from getting polluted. “There will be ways to sift out content if marketplace isn’t sifting it out. But what we are working towards is something that can be leveraged by all and used by all, and that’s the core ethos of what we are trying to do.”

Poets on the blockchain

In fact, Po.et was so invested in the blockchain multi-owner vision they did a $10 million Initial Coin Offering or ICO to sell tokens and raise money for their project. The idea behind the ICO was to get buy-in from a group of investors committed to the idea of building a decentralized marketplace for content owners and a more discoverable network not beholden to larger networks like Facebook or ad models.

Dicker says that people bought these tokens, not as an investment vehicle as you might think, but because they believe in the company. “Even though there is a token, it can’t be bought and sold. They hold that token because they believe in the mission,” he said. Dicker believes that kind of buy-in will help reinforce the underlying structure of the platform and make it more difficult for people to try and find ways to work around it.

“Everyone who has an idea should be able to control that idea. How do we make it simple to store that content and assign a set of permissions that define who can see it and who can’t.” Whether such at vision can thrive, even with the best of intentions remains to be seen. But Dicker sees a better way for the publishing industry on an open platform where the owner controls how the content gets shared and monetized – and where advertising no longer forms the primary basis of the revenue model.