Bots are software applications that typically run repetitive and easily-automated tasks. You can find bots posting content or interacting with users online without any human involvement. They are a valuable tool, often employed to answer questions and post updates to articles. However, there’s also a dark side to bots. Their malicious behaviors include the ability to spread fake news and influence online rating and review systems.

According to the Pew Research Center’s new research, Bots in Twittersphere, bots (be they”good” or”bad”) create 66% of all tweeted links across all web content and among popular news and current event websites, respectively. Bot percentages are even higher (89%) among popular aggregation sites that compile stories from around the web. Interestingly, a small number of highly active bots are responsible for a significant share of links to known news and media sites. The Pew study analyzed 2,315 of the most popular websites, examining a random sample of 1.2 million tweets over six weeks in the summer of 2017. To identify the bots, Pew used the Botometer, a tool created at Indiana University and the University of Southern California. The Botometer estimates the likelihood that any given account is automated.

Analyzing bot traffic is a prevalent research topic with several noted academic reports in the marketplace. One study from the University of Indiana and the University of Southern California, Online Human-Bot Interactions: Detection, Estimation, and Characterization, estimates up to 15% of all Twitter accounts are bots and another study from Rice University, Hunting Malicious Bots on Twitter: An Unsupervised Approach, estimates up to 23%. The Pew analysis focuses on the content of the tweets to understand the proportion of bot links, many of which refer to sites outside of Twitter.

It’s not surprising that automated accounts provide links to a higher-than-average number of sites without a public contact page. Lacking a contact page, omits the opportunity for reader feedback that provides an opportunity for corrections or additional reporting. This can sometimes be an indicator of malicious bots directing users to fake content sites.

Intriguingly, automated Twitter accounts share a larger volume of links, 57% to 66%, from sites that are more centrist and an ideologically mixed. The analysis does not show that automated accounts are politically biased toward liberal or conservative in their overall link-sharing. Bot accounts share approximately 41% of links to political sites of liberal audiences and 44% to political sites of conservatives.

Social media makes it easy for automated accounts to create content and interact with users with no direct human involvement. It’s seamless and usually undetectable to the user. Bot accounts play an important part in the social media ecosystem. The provide automated news updates, answering questions and offering immediate feedback and more. Nevertheless, what impact do bots have on the user experience? Additional Twitter research is needed to focus on bot engagement. Understanding to what degree bot accounts engage users and to what degree bot accounts, when combined with human-sourced accounts, impacts engage offers insight into the complete user experience on Twitter. 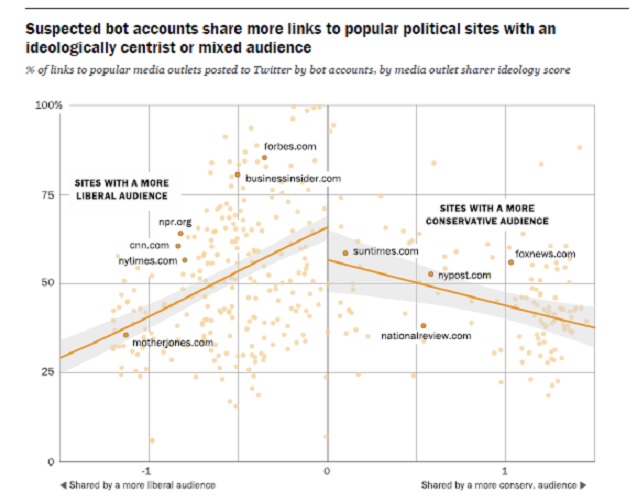