Google owns the search space, but that space is showing signs of fragmentation. Our recent report (March, 2017 from Fivesight Research*) underlines Google’s sustained dominance in the search market but also uncovered early signals of a market shift that may have significant implications for digital media companies: 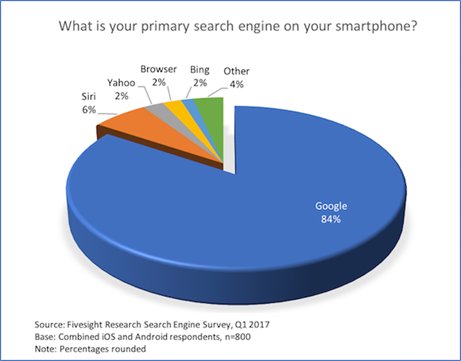 Despite this overwhelming share of consumer preference, there are glimmers of a competitive threat to the Google search box emerging from the fast evolving category of AI-powered Virtual Personal Assistants (VPAs) like Siri, Cortana and Google’s own Google Assistant. In fact, the Fivesight report showed that Siri is the number two competitor to Google in the mobile space, outpacing traditional search engines like Bing and Yahoo. VPAs represent a new type of consumer interaction with content. This means that publishers need to be considering how to create content and experiences that will play well with VPAs.

This is all the more impressive given that Siri is only available on iOS devices, which by most estimates make up less than 50% of the smartphone installed base. And of course, it’s not just Siri. There’s an entire product category of AI virtual assistants evolving both on the smartphone and as standalone home devices.

While the Siri and VPA threat to Google isn’t material at the moment, the data suggests a potentially disruptive market shift. Consumers are getting more comfortable with VPAs despite their technical limitations. As the technology improves we’ll likely see even more consumer adoption and possible displacement of some portion of traditional search engine queries. And every query that goes to Siri or Cortana is a lost revenue opportunity for Google. For marketers the change to “traditional” search engine marketing could be significant.

The VPA impact isn’t confined to smartphones either. Both Siri and Cortana are integrated into current desktop OS releases from Apple and Microsoft. Siri was introduced to the desktop with Apple’s September, 2016 release of the Mac OS, Sierra. Microsoft’s Cortana has been available on desktops since the introduction of Windows 10 in July, 2015. As these operating systems penetrate more of the installed base it is likely that at least some portion of searches will move to the VPA. In fact, during its Q42016 earnings call Microsoft reported that the Cortana search box had over 100 million active monthly users with 8 billion questions asked to date. 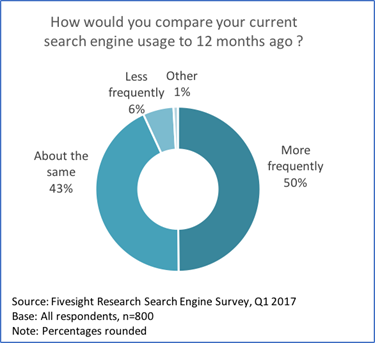 For now though, the sheer volume of search activity will keep the traditional Google search box healthy, even with lower cost per click and leakage of queries to alternatives like VPAs. Consumers are searching more than ever, and the Fivesight report showed 50% are searching more than they did 12 months ago, 43% about the same and only 6% less frequently. All of this activity means that keywords and traditional SEO will remain critical tools for digital marketers.

VPA queries represent a new type of consumer interaction that will require a fresh approach to content development and audience engagement. It is not too early for publishers and marketers to explore how they will play in an environment where AI powered devices and applications usurp the role of the conventional search box. For starters this means leveraging VPA open APIs to build apps and services that integrate with Siri, Cortana, Alexa and the rest.

15 years ago in his annual shareholder letter, Larry Page spelled out his “dream” for search. Instead of keyword queries and blue links he imagined an AI that would answer spoken questions. Today we are seeing glimpses of that AI powered search. How ironic it would be if Page’s dream turns into a nightmare that fractures the Google search box and the empire built upon it.

Joe Buzzanga is Founder and Chief Analyst at Fivesight Research. He has over 30 years of experience in product development, market research, product strategy and industry analysis. He has a diverse technology background spanning telecommunications (Bellcore/Ericsson, 3Com), semiconductor (Intel), publishing (Elsevier, IEEE) and information retrieval (Elsevier, IEEE). Joe has an MBA from Rutgers University, an MLS from the University of Wisconsin-Madison, and an MA in Philosophy, also from the University of Wisconsin-Madison.