In 1972, a couple of intrepid Washington Post journalists stumbled onto a story about a break-in at Democratic National Committee Headquarters. These two young men had no idea they had unearthed one of the greatest political scandals of the 20th century, one that would eventually take down a president. All they knew was that they pulled a string and didn’t let go until the truth came tumbling out.

The Watergate scandal (named for the complex where the break-in occurred) was so legendary that it became the archetype for all scandals that came after it. These days, major scandals (be they political or not) are likely to have the ending “gate” amended to their popular name in homage — all because of journalists who doggedly pursued the truth. We need people like that now more than ever.

When I was coming of age, those two journalists, Bob Woodward and Carl Bernstein, inspired me and a generation of young men and women to pursue a career in journalism. We believed that journalists could make a difference, that you could hold people in power accountable and that was worthwhile and righteous work.

Somewhere along the way, journalism lost its way. Maybe it was the corporatization of media one of my college professors warned us about. As media ownership consolidated into fewer and fewer hands, a reckoning was bound to come. Maybe it came in the form of the internet, a concept that newspapers chose to ignore or simply misunderstood until their industry was steamrolled. Newspapers closed down or radically transformed to survive. Journalists lost their jobs… or transformed. The mission changed.

Perhaps more than all of that, the industry itself shifted in a dramatic way, one which caused it to lose the trust of a significant segment of its core audience. Pursuing the truth, holding those in power accountable was no longer a priority. In a quest for clicks, it seemed that people didn’t want to hear uncomfortable truths. They wanted to be entertained with the latest celebrity gossip or hear about the new blockbuster movie that was coming out. 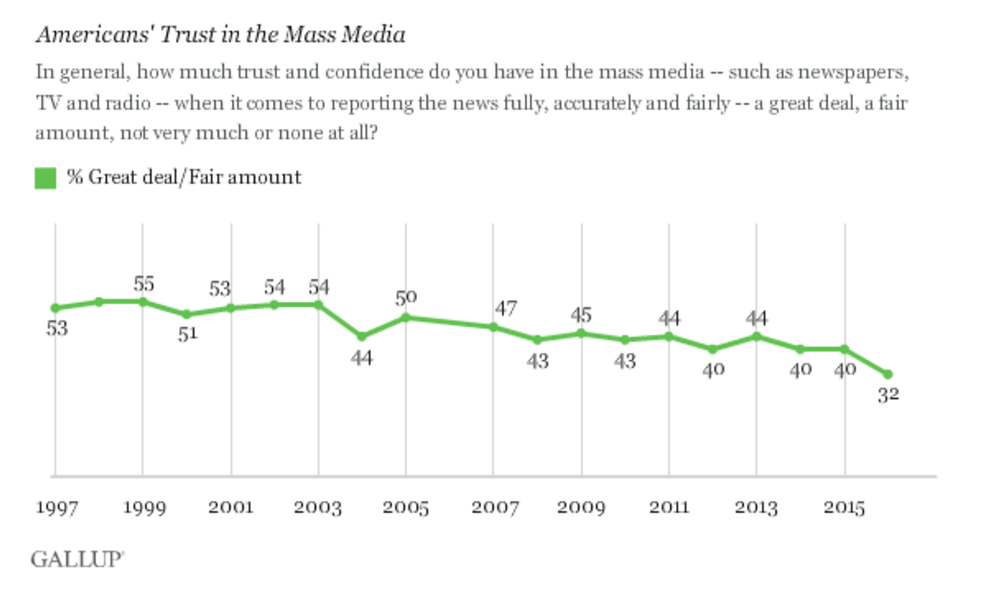 Time frames and ways of delivering news shifted too. News broke on social media, sometimes before conventional news outlets even knew it had happened. Suddenly because of that growing speed, being first took priority over being right, and as the number of journalists decreased, distrust grew. According to data from Gallup, in 2005 around 50% of respondents trusted the media a great deal/fair amount. That number had plunged to 32% by 2016, dropping below 40% for the first time since polling began in 1997.

It’s interesting that as the trust in media dropped, at the same time that the number of working journalists also decreased dramatically. That’s probably not a coincidence. According to data from Neiman Labs, the number of journalists in the United States tumbled from a high of 54,700 in 2003 down to 32,900 in 2015.

Last week though, after years of bleeding jobs, we heard some honest-to-goodness positive news — a newspaper was actually hiring journalists in 2017 — and it couldn’t come soon enough, judging from those poll numbers. Politico reported that the Washington Post planned to add more than 5 dozen journalists to the staff this year, an 8% increase.

As we move into 2017, it’s time to earn that trust back, and the best way to do that, is to go back to the hard work of being of a journalist, of following the stories that matter, of holding people in power accountable. Having more boots on the ground in Washington will certainly be welcome. As a society, we need that. Most of all, we need men and women, whoever they may be, to step up and inspire a generation that journalism is honorable work, just as Woodward and Bernstein did for mine.