Mobile usage now represents almost two out of every three digital media minutes as we continue to see more and more consumer usage shift from desktop to mobile. In all, time spent in digital media grew 53% over the past three years, attributed to the surge in usage of mobile apps (+111%) and of mobile web (+62%) reports comScore’s newly released 2016 U.S. Mobile App Report.

Interestingly, the smartphone app is the biggest driver of digital media engagement, resulting in an 80% increase in mobile’s share of time spent over the past three years. However, while the mobile app audience spends more time on apps, comparing users of Top 1000 Apps vs. users of Top 1000 Mobile Web Properties, the mobile web audience is almost three times bigger than the app audience. Intriguingly, almost half of all smartphone users do not download any apps. Among the half of smartphone users that do download apps, they average 3.5 downloads per person per month. Industry experts forecast that by 2017, there will be 268 billion apps downloaded.

It’s difficult to build to build a mobile app audience. However, once the app users are engaged, they are an extremely loyal audience. To illustrate this point, app users spend more than three hours per month on the Top 1000 apps on average whereas mobile web visitors spend less than 10 minutes per month on the Top 1000 web properties. Males 18-44 tend to be the heavy app downloaders with approximately 5 new apps each month.

While all demographics are using their smartphones apps more now, persons 55-64 registered the greatest year-over-year increase at 37%. Further, all U.S. consumers, especially persons 18-24, spend the largest share of their web time on smartphone apps except for adults 65-plus, where screen size mostly likely acts as an inhibitor. In contrast, tablet app usage is down across all demographics. 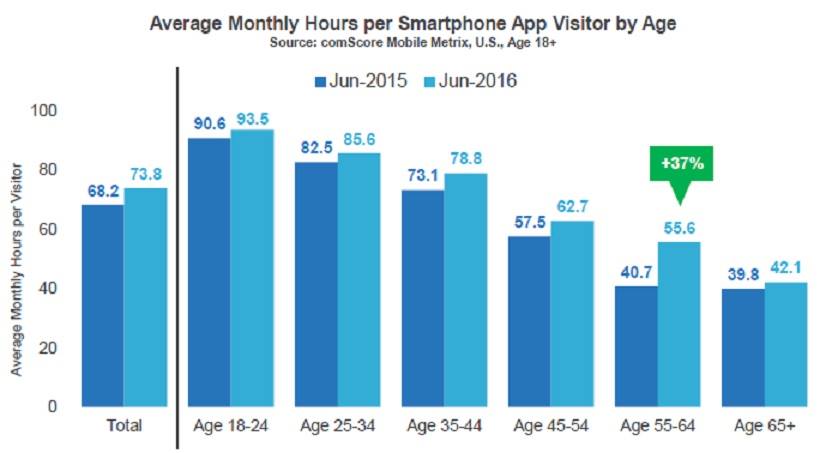 Facebook and Google are a strong hold in the app marketplace; 7 of the Top 25 apps, based on unique visitors, are owned by these two companies. Of the Top 25 apps, the three leading categories, based on unique visitors, are Utilities (9), Social (6) and Entertainment (6 – tied). Facebook, the largest social platform accounts for 76% of all time spent on social apps. App position on smartphone correlates to usage. Not surprisingly, apps with easy access on the home screen showed strong audience reach. Smartphone users spend approximately 45% of their app time on their #1 most used app, and about 73% on of that time of their Top 3 apps.

Mobile devices are consumers’ constant companions. It’s where audiences are spending most of their time online. Since mobile users are spending more time on their apps, it’s important for digital publishers to continue to develop a platform strategy to attract and transition their large web audiences to loyal app users. Further, as the app market continues to expand “smart” device utilization (think loT like exercise trackers, home and car alarm systems, etc.) expands, it will only become more difficult to break through to the consumer’s screen. 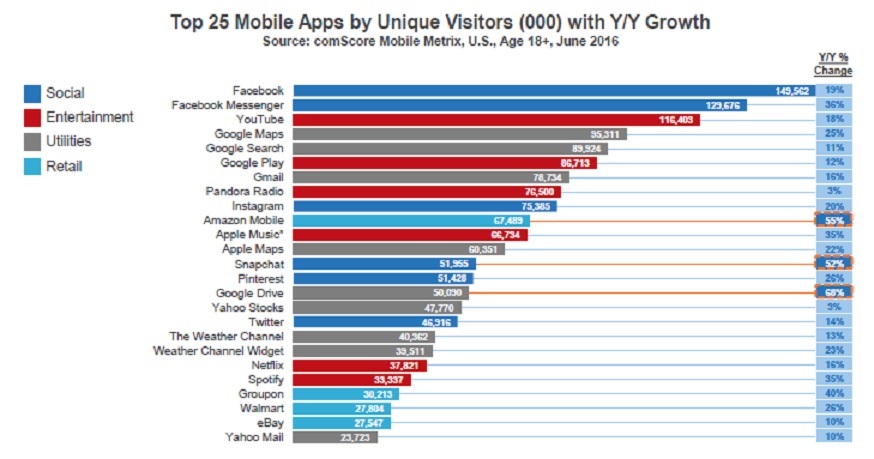