Newspaper publishers appear certain that consumers still value local newspapers for their quality and trustworthy content. In fact, four in 10 publishers (40%) report overall confidence in the strength of the newspaper industry compared to other news sources according to the recently released 2016 HubCiti Publishers’ Confidence & Technology Report.

At least 33% of newspaper publishers think that the industry is getting better. What’s contributing to this confidence? For publishers it’s most likely the new digital and social products offer strong opportunities to monetize news content. As for consumers, easy access to engaging content at their fingertips is a sure winner.

Moreover, 41% of respondents stated they prefer a digital version of print content compared to 26% that said they like to search for specific content. In addition, 36% of consumer respondents reported that they mainly receive their local news from TV, and 23% said from online news aggregators.

Digital is a popular consumer access point for newspaper content. Consumers of news reported that they are more likely to view news on a mobile app or website than print. Only one in 10 respondents (8%) stated they are tolerant to watch an ad in order to read an article or watch a video, compared to 28% that would not watch an ad at all. Further, close to two-thirds of respondents (60%) said they would not pay for special digital content.

While subscriptions and advertising are still primary revenue sources for publishers, new monetization streams offer healthy opportunities. Not surprisingly, nine in 10 publisher respondents (87%) ranked print ads and classifieds as very important to revenue generation with subscriptions and website revenues ranking second (74%) and third (64%). Publishers also reported that they plan to see a 50% increase in revenue from both website and mobile app activity in the next 12 months. Almost forty percent of publishers plan to hire new employees for digital service implementations, with 54% planning to also hire a third party firm. 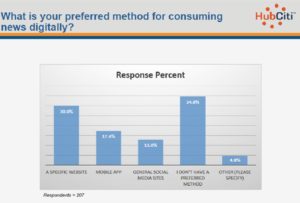 Local publishers are clearly ramping up their digital services and seeking third party relationships to meet market and consumer expectations. In doing so, they are also expanding their local offering to reach smaller and active communities. Experimentation for publishers is key to determine news content that is both engaging to consumers and offers opportunities for monetization.

*Important to note this online survey is not based on a probability sample and therefore no estimate of theoretical sampling error can be calculated.