Giving your audience what they want, when and how they want it has become the first tenet of effective marketing. But your audience also increasingly craves experiences (even preferring it over discounts, coupons and cash)—a development that turns the pressure up on companies to spark emotive, creative and personal communications that strike a chord.

It’s here that emojis—the fun smileys and pictographs that have become the fabric of how we engage and exchange across social networks and messaging—are bridging the gap, driving new levels of engagement delivered with a distinctly personal touch.

Emojis have evolved into a new, visual language, powering campaigns and communications by a wide range of media companies and brands including Disney, NASCAR, VH1and Warner Bros., to name a few. In fact emojis are so popular that Sony Pictures Animation is targeting an August 2017 release of a movie that brings the entire emoji library to life.

Emojis clearly cover the bases to quality as a new communication medium, which is why it’s critical to understand when and how to use them in campaigns and messaging. Miss a cue and customers could begin to experience what Ad Age calls emoji messaging fatigue.

In this vein, Appboy, a company that offers a customer relationship suite for mobile-first marketers, has released new research that delves into the emoji-as-a-medium phenomenon. In addition to quantifying the use and response to emojis in marketing messages, the research also draws on a survey of 500+ consumers in the U.K. and the U.S. to understand people’s perception of emojis in personal communications. 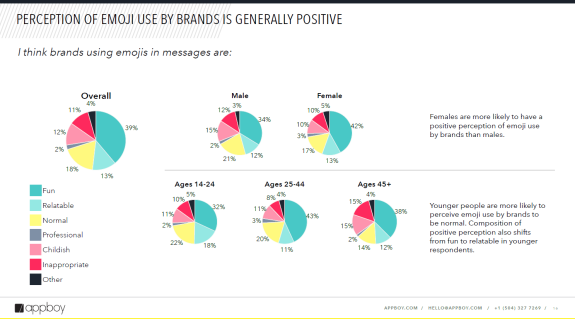 Predictably, respondents ages 14-24—a population well accustomed to using mobile, messaging and the emojis that have been around since the 1990s—use emojis “more often and frequently than users over the age of 45. But younger audiences aren’t just open to using this medium for messaging among themselves; they also have a more positive perception of brands that use emojis to connect with them directly.

It also comes as no surprise that younger audiences, weaned on SMS, are “more open” to emoji messages that arrive via text messaging than emojis that are delivered by email.

Overall, males are more likely that females to have a negative perception of emoji—no matter how they are delivered. This makes sense if we consider that females are also the biggest users of social media and the biggest fans of communication in all its forms and formats.

This is why Appboy suggests companies might be missing out on the opportunity to communicate with female consumers in a way that is more aligned with their preference for emojis. Despite the fact that females use emojis more than males, nearly 40% recall never receiving an emoji message from a brand. Appboy reads this to mean that “there could be an opportunity for brands to up their emoji game as a third of [all] consumers have never received an emoji message from a brand.”

The data around usage and conversion confirms emoji messaging could be more than a missed opportunity. It may also be the most effective way to personalize communications and campaigns.

A review of over 250 apps and 6 billion push notification and messages that were sent via the Appboy platform from June 2015 to June 2016 shows:

Connect the dots, and there are plenty of good reasons for companies to get more active—and smarter—about how they use emojis in their messaging and marketing. But the meteoric rise of emoji use and its positive perception among a significant percentage of consumers is no reason to ignore best practice. Emojis may liven up the “conversation” but companies still need to ensure they deliver messages people will appreciate, not dismiss as spam.