Free press, free speech, and personal privacy are essential to an open, free, and prosperous society. On one hand, journalists and authors must be able to communicate privately and anonymously. On the other hand, they must be able to speak freely and securely without fear of repercussion. In both cases, they must be able to support what they do. Online censorship, the hacking of large institutions and civil society, systematic piracy and data fracking, and Edward Snowden’s revelations of mass and targeted surveillance have driven people of well-established democracies to seek anonymous, encrypted, and monetizable communications through blockchain technologies. These tools enable them to disguise their identities and scramble their messages in transit and in storage so that only authorized persons may access them in exchange for cryptocurrency such as Bitcoin.

Governments that wish to repress the truth will find the blockchain significantly more challenging to stifle than the Internet for several reasons. First, journalists and photographers could use public key infrastructure (PKI) to encrypt information and conceal their identity from would-be censors and attackers. Second, governments could not destroy or alter information recorded on the blockchain; therefore, citizens could use it to hold their leaders accountable for their actions. Third, where governments starve honest journalism of funding, journalists—particularly stringers in the most dangerous parts of the world—could raise funds on the blockchain, casting a wider net for news directors and investors who preferred to remain anonymous.

For example, veteran Chinese journalists could try one of the distributed peer-to-peer crowdfunding platforms such as Koinify, Lighthouse, or Swarm that use PKI to protect the identities of sender and recipient better than Internet-only systems. Another great blockchain tool is the free mobile app GetGems, which both guards and monetizes instant messaging through bitcoin. Users can send all sorts of files securely, with GetGems functioning like private email, not just SMS.[i] These apps are just the beginning of what is possible to thwart censors and pirates.

Another solution is a distributed platform for filing stories in an immutable ledger that makes the ledger unique, such as what Factom aims to accomplish in the developing world. Reporters could purchase entry credits—rights to create entries on Factom’s ledger. As with the bitcoin ledger, everyone would get the same copy, and anyone could add to it but no one could alter entries once they were filed. Factom has a “commit/reveal commitment” scheme that serves as an anticensorship mechanism: servers in China, for example, couldn’t prevent the filing of an otherwise valid entry because of its content. If the reporter had attached an entry credit to the filing, then it would get recorded. A government could identify certain entries as offensive but couldn’t delete or block them as the Chinese government has done on Wikipedia. If an official court were to order a change in the ledger, an officer of the court could make a new entry to reflect the ruling, but the history would remain for all to see.[ii]

A third solution is distributed peer-to-peer microblogging that doesn’t go through centralized servers. Stephen Pair, CEO of BitPay, described how to reinvent Twitter or Facebook so that users controlled their own data. “Instead of having just one company like Facebook, you might have many companies tying into this common database [the blockchain] and participating in building their own unique user experiences. Some of those companies might ask you for or might require certain information to be shared with them so that they could monetize that. But as a user, you would have full control over what information you’re sharing with that company.”[iii] There is Twister, a Twitter clone in terms of feel and functionality that leverages the free software implementations of Bitcoin and BitTorrent protocols and deploys cryptography end to end so that no government can spy on users’ communications.[iv]

Through the lens of blockchain technologies, journalists and authors see the contours of a world that protects, cherishes, and rewards their efforts fairly. All of us should care. We are a species that survives by its ideas, not by its instincts. We all benefit when cultural industries thrive and when the content creators themselves can make a living. Moreover, these are the bellwethers of our economy—they reveal faster than nearly any other industry how both producers and consumers will adopt and then adapt a technology to their lives. Every business executive and government official has much to learn from them about the new era of the digital age.

Don and Alex Tapscott are co-authors of the book Blockchain Revolution: How the technology behind Bitcoin is changing money, business and the world (Penguin, May 2016). Don Tapscott, CEO of The Tapscott Group, is one of the world’s leading authorities on the impact of technology on business and society. He has authored over 15 books including Wikinomics: How Mass Collaboration Changes Everything which has been translated into over 25 languages. His son, Alex Tapscott, is the CEO and Founder of Northwest Passage Ventures, a VC firm that invests in companies in the blockchain market. For seven years in the Canadian and U.S. Capital markets, Alex has worked tirelessly to help entrepreneurs realize their goals, raising hundreds of millions of dollars in critical growth capital and providing sound advice and counsel. 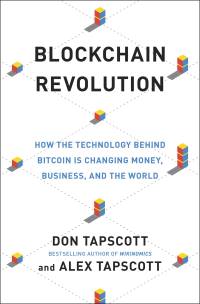