The convenience and flexibility of watching television continues to grow with the ability to time shift and stream programming. These patterns hold true for viewers of public service broadcasting in the United Kingdom; Channel 3 services, Channel 4, Channel 5, S4C and BBC. According to their mandate, public service broadcasters must offer quality programming which informs an understanding of the world, stimulates knowledge and learning, reflects the strength of the UK’s culture and represents diversified viewpoints.

PSB channels are committed to the practice of fulfilling the programming criteria. The Office of Communications (Ofcom), the government-approved regulatory and competition authority for the broadcasting and telecommunications, assesses public services channels’ yearly performance in its report, PSB Annual Research Report. The report evaluates three key areas to gauge effectiveness of the of public service channels: 1) audience opinion 2) viewership and 3) programming and spending. 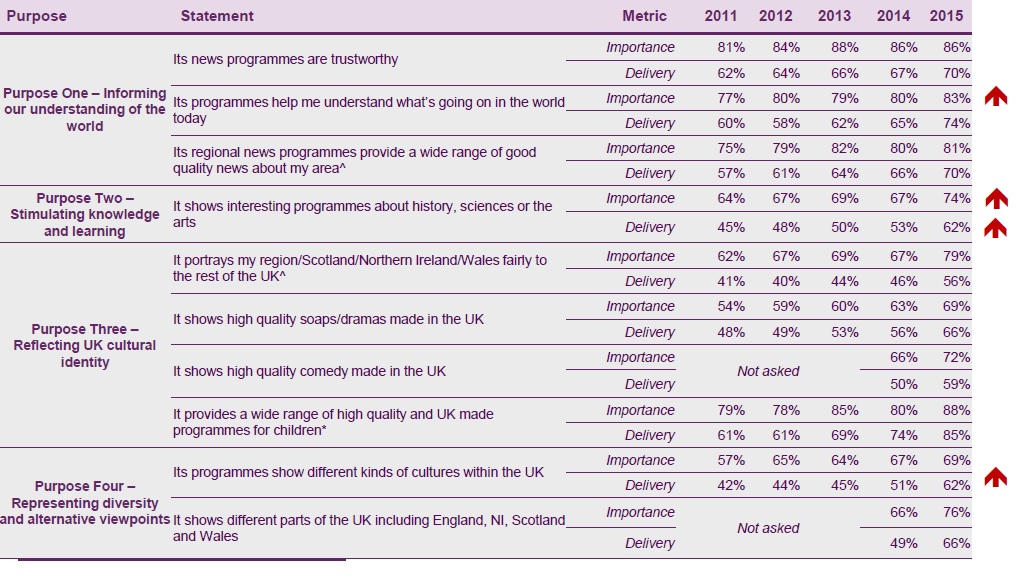 The report also looks at time spent watching broadcast television, with demographic breakdowns, as well as the quantity and quality of public broadcast content. In all, viewers watched 3 hours 36 minutes of measured broadcast TV in an average day in 2015, almost a half hour less per day than in 2010. As we have also seen in the U.S., viewership declined notably for adults 25-34 (19%) and adults 35-44 (17%) during this same time period. These declines were attributed to adult usage of on-demand services such as BBC iPlayer, All 4, Netflix or Amazon, especially among those aged 15-24s and 25-34.

Further, according to the BARB data, viewing of national and international news on broadcast TV increased year-to-year to 96 hours per person 4+ after a three-year decline. Total viewing hours to broadcast TV news also increased (approximately 3 hours) among adults 35+ to 142.5 hours per person in 2015 in contrast to the declines among Persons 16-34 (32.4 hours in 2015 from 33.5 hours in 2014). Where are the younger viewers going for their news? Six in ten Persons 16-24 reported using the internet or apps for news compared to 51% who cited using television.

In 2015, the PSB channels broadcast 31,974 hours of first-run UK originated network programming, an 8% decrease from 34,689 hours ten years ago. A shift in genre production from big-budget dramas to relatively low-cost original programs allowed for a decreased spending with sacrificing too many programming hours.

These values act as important guidelines in delivering effective programming. Adhering to these characteristics, as well as, noting the changes and differences between younger and older adult viewership, will allow PSB channels to meet the expectations of its viewers.