Ad blockers have become the bane of the online publishing industry’s existence. Having spent decades grappling with how to effectively monetize digital content, now publishers face a very real obstacle to their primary revenue stream in the form of the ad blocker. As ad blockers increasingly take hold, publishers are struggling to determine the extent of the threat and, of course, how best to address the issue.

It all starts with the fundamental question: Do people inherently dislike ads or are there deeper reasons for consumers’ increasing adoption of ad blockers. While there are probably individuals who would rather not see any ads, most customers are used to a certain level of advertising in any media they consume. However, ads today do so much more than sit idly on a page or flicker by in the minute it takes us to grab another beer from the fridge. The most obvious example are those ads that follow a user around after an innocuous Amazon search. It has become clear to consumers that their actions are being tracked and targeted and a significant number of them aren’t happy about it.

Even as consumers employ ad blockers out of privacy concerns related to ad tracking, many publishers are under pressure from marketers who increasingly desire more targeted ads (as seen in those follow-me ads). But in addition to privacy, consumers have expressed many other issues with digital advertising such as slowing down page load times, increasing ad volume, and ads that interfere with the content with overlays or other distractions.

While there’s no silver bullet solution, most agree that it’s important to view digital advertising in the context of user experience, which means respecting users’ desire for unfettered content, while at the same time acknowledging the underlying need to monetize that content.

The extent of the problem
eMarketer recently did a survey on ad blockers, and found usage in the US is growing rapidly. According to the research, almost 19% of people who access the internet from a desktop or laptop computer were using ad blockers in 2015. That’s expected to increase to almost 24%% this year and over 28% by 2017, which translates into over 77 million people using ad blockers by next year. 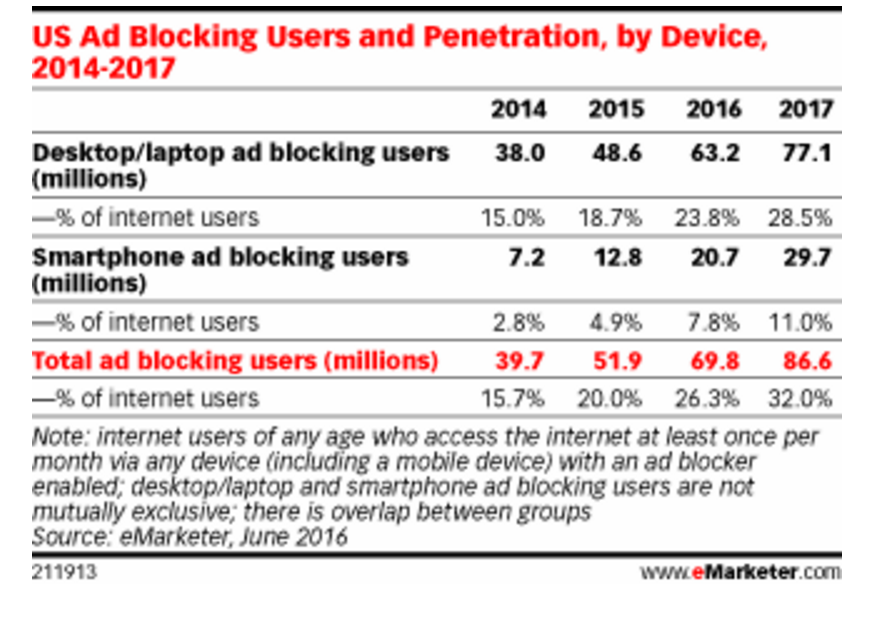 If there’s any good news for publishers here, it’s that people tend to use ad blockers much less on mobile devices, at least for now, with just over 5% in 2015, close to 8% this year and usage expected to climb to 11% of mobile users by 2017. But as marketers beef up their mobile advertising, chances are these devices will eventually catch up with desktop and laptop computer market.

And this all translates into real money being lost. Juniper Research just released research that predicts ad blockers could take a 10% bite out of ad revenue by 2020.

The underlying cause
The industry certainly recognizes there’s a problem—and it isn’t just the fact that people are using ad blockers. Many agree that user adoption is simply a reaction to the underlying issues related to ad quality and quantity. Regardless of the reason, it’s not going to go away unless publishers change their ways, as Scott Havens, global head of digital at Bloomberg Media points out.

“This is primarily a reaction to heavy loading, creatively limited, and at times a flooded advertising experience that publishers have forced upon readers and generally speaking, have not truly evolved over the last 20 years,” he said.

The trouble is that when people have bad experiences with ads, everyone suffers, according to Dominic Good, global advertising sales and strategy director at the Financial Times. “Ad blockers are a blunt instrument that punish both the good actors and the bad actors in the ad ecosystem, thereby making them the symptom of a lowest-common-denominator illness,” Good explained.

But David Stern, director of product development at Slate sees it as deeper problem, especially where tracking is involved. “Ads increasingly hurt the reading experience. They interfere with and distract from the content by covering it up and by using imagery and animations that pull the eye away from the story. They can slow down the page significantly. And they deliver targeted messaging based on the user’s past behavior elsewhere on the internet that can feel creepy,” he said.

What publishers should do about it
While addressing these issues may stem the tide of ad block adoption, a significant challenge is how publishers should deal with consumers who have already installed an ad blocker. Some opt for blocking those who block or demanding to be whitelisted, but that can create an adversarial relationship with customers, which is clearly not desirable. 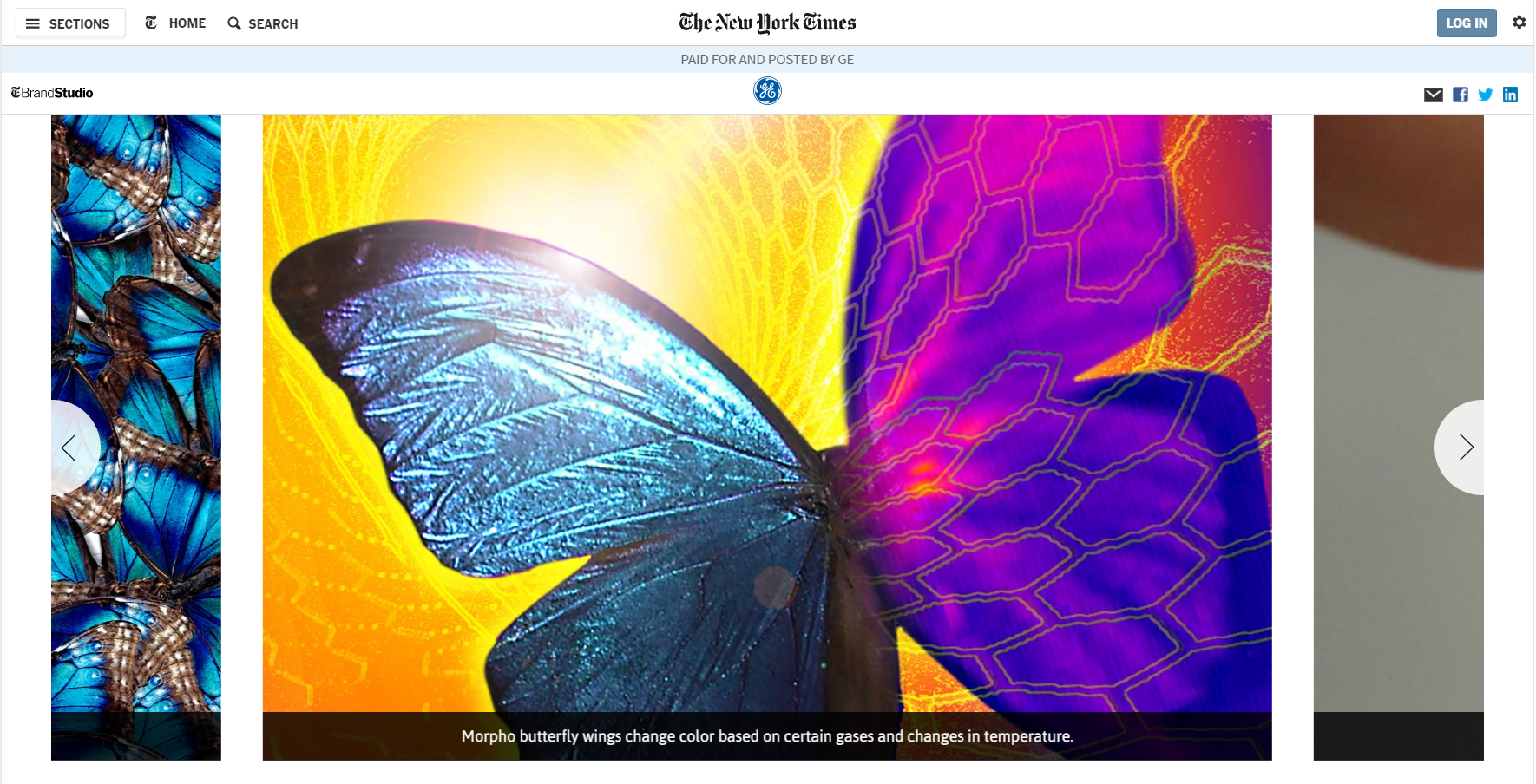 One answer the New York Times has found is circumventing the traditional digital advertising experience by employing branded content. In a speech to the IAB Ad Blocking Summit earlier this month, Thompson implored publishers to be more creative when it comes to ads, citing branded content as a means to generate ad revenue. While Thompson notes possible negative connotations that come with this approach, he believes that when done right, media brands can offer quality content and generate revenue from it.

“For us, branded content does not mean fake journalism trying to pass itself off as genuine newsroom output. It’s work like the animated virtual reality film we made for GE for the launch of our VR app and the distribution of a million Google cardboards. High quality content well worth consuming in its own right,” said Thompson.

Slate’s Stern says it shouldn’t be about blaming the victim either. His company understands that people using ad blockers have genuine issues with ads, so his publication is not ready to start blocking readers who use them. “We believe that visitors with ad blockers have very legitimate concerns, and we’re trying to address them. We’ve stopped delivering interstitial advertising and we’ve improved page performance. We’re working on consolidating or removing many of the third party scripts on our pages,” Stern said.

Instead of “punishing readers,” Stern says Slate is working hard to convince those with ad blockers to move to the site’s premium ad-free service Slate Plus. They also prompt those that aren’t willing to ante up for a premium experience to disable their ad blockers on the site—and point out the steps the site is taking to improve their experience, while providing the articles they are there to read.

Other sites aren’t sticking with the nice guy approach, however. After trying polite messages, Digiday reports that The Guardian has decided to try tougher messaging to those who block ads to see if that helps reduce its use. The fact is everyone is feeling their way here.

Understanding your mission
It might seem obvious to anyone in the industry, but part of the problem could be a disconnect between the purpose of the ads—to help pay for the creation and distribution of the content—and people turning on ad blockers. As Stern pointed out: It’s about the experience. Ads slow down page loads, something users generally don’t like at all (particularly on mobile). For others it’s the privacy issue. But whatever the reason, an important component is finding a way to reach your audience and making them understand this is how you pay for producing the content they want to consume.

“If you consume great journalism without making any contribution towards paying for the journalists and the editors and photographers and videographers and graphics artists and engineers, and if enough people follow your example, that journalism will either be diluted or restricted to the relatively small number of people who have the willingness and ability to buy a subscription,” the NYT’s Thompson said.

Slate’s Stern isn’t naive enough to believe that a majority of readers—many raised on a steady diet of free content—are going to suddenly see the light and shut off their ad blockers. However, he does think that some will if they can see that connection between the ad dollar and the article they’re reading.

Ultimately publishers have to find ways of monetizing the content that move beyond the traditional notion of online advertising as we have known it. This means experimenting with alternative approaches such as creative branded content. And even as publishers look for ways to improve the advertising experience, they need to do a much better job of educating readers that you can’t deliver good content for free without some sort of underlying revenue source to fund it.