Given that these days the majority of people prefer to stream television content on their own schedule, producing programming that ranks high in real-time viewership is no small achievement. Certainly, sporting and awards event television retain their real-time charm, but the Discovery Channel is betting on the live-appeal of one of its most popular TV-viewing events: Shark Week.

Over the years, Shark Week has increasingly become “a live viewing event” according Conal Byrne, SVP of Digital Media for Discovery Communication. However this may be as much a reflection of Shark Week’s high levels of social engagement as it is of the network’s on-air programming. Byrne says that Shark Week has evolved from classic prime time fare to the sort of television-inspired social occasion that he likens to Super Bowl parties: “The event of watching the show has become almost as big as the show itself.” Byrne adds that as this social viewing progressed, Discovery began to see an opportunity to create social media experiences that reflect the real-time fan engagement around Shark Week.

To that end, Discovery Channel has announced that it will premier the new embed functionality from Meerkat in conjunction with Shark Week’s return on Sunday, July 5. Discovery Channel will host behind-the-scenes Shark Week content through Meerkat embeds to complement its multiplatform approach. Discovery’s player will live on the network’s recently launched DLive digital destination, which features a roundup of fan-favorite streaming content (in the case of Shark Week, that means a lot of live shark cams.)

Byrne says that Discovery Channel has experimented with real-time social video in the past, citing last year’s premiere of Mythbusters when they took a production team out to the livestream of the hosts watching the premiere from the warehouse where the show is produced.. Byrne described the result as “a very real-time experience: Watch it now or it will be gone.”  While he felt that was an effective approach, it was a significant production. So, when they began thinking about a real-time streaming experience for Shark Week fans, he reached out to Meerkat—which they’d worked with in the past for Animal Planet — and learned about their new embed functionality.  “It was one of those happy coincidences; they were building exactly what we needed,” said Byrne, and one that would provide ease of production and included social and interactive features that make it not only easier and less expensive, but better optimized to suit the socially-engaged fan base.

Byrne marvels at the exciting pace at which digital media evolves, saying that “between the time we conceived of this idea and set a release date, live social broadcasting emerged and we knew that if we did Shark Week without live social broadcasting, we would be missing something.” Not only will Shark Week viewers be able to dive deeper with special Shark Week content through @SharkWeek on Meerkat and through Meerkat embeds at DLive, Byrne says that shark experts and fans alike can broadcast and be part of the programming.

Among Discovery Channel’s plans for Meerkat are a live feeding from the National Aquarium in Baltimore, a celebration of “Findependance” at San Francisco’s Pier 39 fireworks and “Shark on the Street” Q&As with viewer giveaways. They also have plans for a series of “Finbassador” shark experts – from photographers to educators and conservationists – who will share inside stories on what it’s like to be a part of Shark Week. Byrne is particularly excited about the behind-the-scenes stories from Shark Week saying that “for me, some of the most exciting stuff at Shark Week literally happens behind the cameras. The cinematographers and producers are heroes!” Using Meerkat embed will allow some of these stories to get out of the boardroom and enhance audience’s understanding of what it takes to create Shark Week.

Byrne says that social media has become a critical component of Discovery Channel’s digital strategy over the past several years and that they have experimented with a number of approaches. This has included an emphasis on on-air “social TV,” a curated approach, and a pure volume play in which they tracked mentions and engagements. This year, he says that the social media strategy has been “very curated and intentional,” and part of every production conversation.

Right now, monetizing the Meerkat experience is not something he’s highly focused on. Byrne says that not only does he feel lucky to have the support of Discovery Channel in allowing for constant experimentation, but that pushing to monetize too soon can be detrimental. “When we first roll out a cutting edge idea like this, the primary gauge is whether or not it resonates with the superfans and makes more fans.” While Meerkat does provide ways to integrate sponsors, Byrne says they will focus on the fan experience, collect the data, and then consider how best to monetize. “You can definitely kill a product and its potential if [revenue] is your first priority.” With Shark Week, the focus is squarely on enhancing the real-time fans’ experience and engagement. 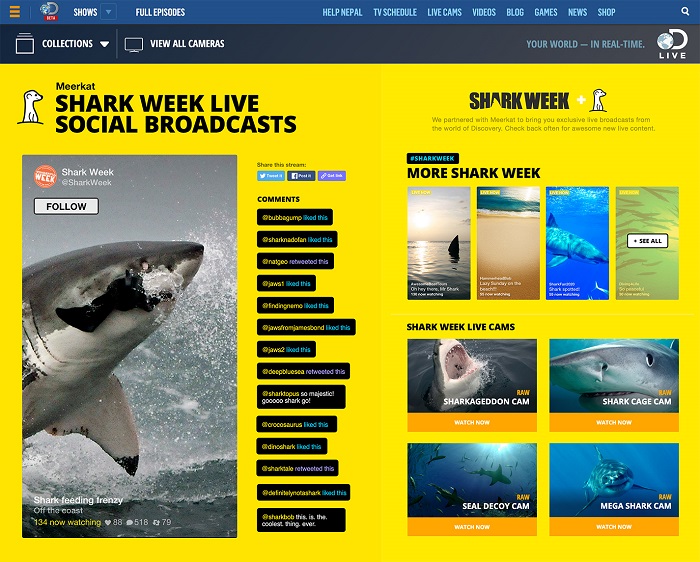