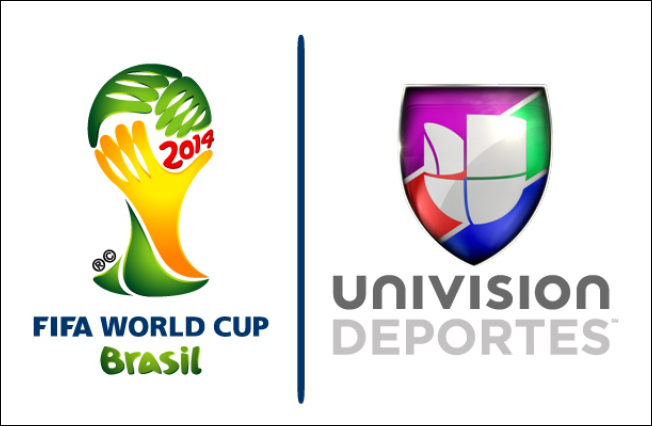 The 2014 FIFA World Cup is well under way and it is proving to be the most digital and social event in the history of Univision Deportes. The first six days of the 2014 FIFA World Cup have been the most visited days for Univision Digital of all time. Moreover, the live stream of the Mexico vs. Brazil game on June 17 received 3.63 million views, making it Univision’s most watched live stream ever.

This does not come as a surprise. Compared to 2010, this World Cup compared shows far greater digital consumption across live streaming, page views and social media interaction and reflects the broader shifts taking place in the consumer media landscape, notably the dramatic shift to mobile.

Our World Cup digital experience is centered around our Univision Deportes app. We partnered with industry leader NeuLion to create the newly-enhanced app to deliver the best possible World Cup digital viewing experience, serving as the official home for all World Cup games and content. The app offers fans access to high-quality live streaming coverage of all the games with in-match, real time highlights and stats, multi-camera angle video highlights, schedules, individual club news, rosters and more. In expectation of the tremendous demand for live streaming that we expected, we worked hard to test and re-test with matches before the World Cup to make sure that the viewing experience was the very best possible.

Additionally, the app offers fans watching live sports on smartphones and tablets a one-of-a-kind interactive live soccer experience that can be personalized to the individual fan, connecting users to each other via their social networks using Twitter and Facebook. U.S. Hispanics over-index on digital video consumption. We took this into account with the creation of this app which has been optimized to work across mobile devices and platforms.

Our audience has most certainly embraced this app in a big way. It has already been downloaded more than 1 million times since June 1, and now 2 million times overall. In fact, since the launch of the World Cup, the Univision Deportes app has ranked among the top three free sports apps in the Apple App Store.

Our objective for this World Cup was to provide a new digital destination for soccer fans that gives them a chance to engage with content, watch games live on the go and receive up-to-the-minute, real time match highlights and updates like they never have before. We want to deliver the ultimate companion for the die-hard soccer fan—regardless of platform. Importantly, from a strategic perspective, we made the decision to not create a separate experience and app just for World Cup. We created the Univision Deportes experience as both the home of our World Cup experience and the home of all of our soccer coverage year-long.

As part of Univision’s FIFA World Cup Brazil 2014 all around digital experience, fans can also follow the action, online in the fully responsive World Cup homepage, or using the hashtag #UDMundial across their social platforms on Twitter via @UnivisionSports, as well as comment and follow all related content Facebook.com/UnivisionDeportes and Instagram/UnivisionDeportes.

The World Cup creates the space for one big conversation across social media. We have seen consistently high engagement on Twitter and Facebook, with viewers engaging with our programs in a big way.  Our awards shows consistently have higher social engagement than the GRAMMYs and Oscars. For the World Cup, we have led on Nielsen Twitter TV ratings across some of the matches.

For this World Cup, we will deliver a few interesting new social plays:

First, Univision has created “Por El Futbol,” a documentary for fans around memorable World Cup moments as told by the fans, via Instagram and Vine

Second, Univision is kicking off the longest soccer kick in the world, offering fans to join by participating through Instagram and Vine, which will culminate with the ball landing in Brazil.

Then we want to break from pure sports posts and show more of what fans are experiencing throughout Brazil, fans can experience every moment as if they were there by following hashtag #CelebrandoEnBrasil via their favorite social network.

As for social TV integration, Univision and Facebook have teamed up to deliver the best possible social experience for fans who tune into World Cup coverage, with Facebook and Instagram content integrated into the broadcast. This allows us to continue to work with our viewers as they become partners in the content creation process.

The daily broadcast segments feature a mix of Facebook posts by athletes, teams and public figures, fan comments, various chatter data (such as which players are top talk on Facebook, etc.), along with Instagram photos by teams, players and fans. Univision has committed to running a significant number of social segments daily throughout the tournament.

We welcome one and all to watch fútbol en Español with us!

Kevin Conroy serves as president of Univision Interactive Media and Enterprise Development for Univision Communications Inc.Conroy has more than 20 years of advertising and media experience and has managed a number of popular Web brands, including AOL, AIM, ICQ, Moviefone, Netscape, Truveo and Winamp. Conroy was recognized by Broadcasting & Cable as a 2010 Digital All-Star, and lauded as one of Digital Media Wire’s 25 Executives to Watch. He also serves on the boards of The Interactive Advertising Bureau (IAB), Online Publishers Association (OPA), Newell Rubbermaid (NWL) and RecycleBank. He is a graduate of Bowdoin College.