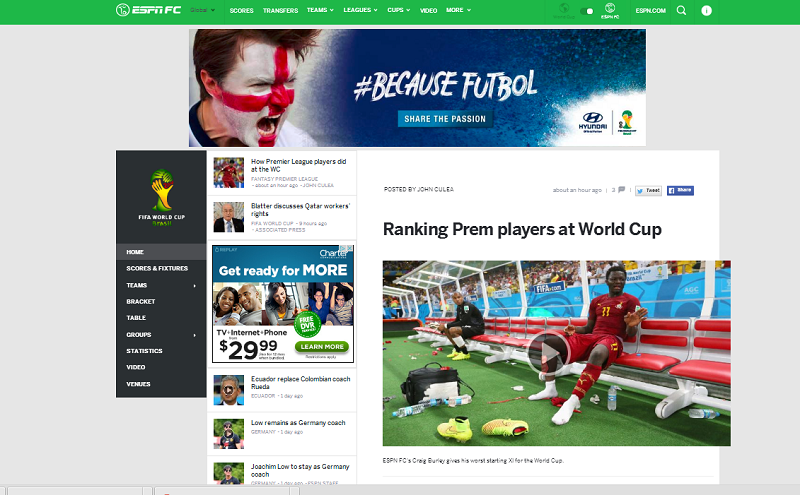 The buzz around the 2014 World Cup is palpable. And this year, more people can watch it more places than ever before thanks, at least in part, to ESPN’s massive multiplatform push. According to Patrick Stiegman, VP and Editorial Director of ESPN Digital and Print Media, “Strategically, we don’t separate digital from print and broadcast. All parts must be moving together nicely as we produce this incredible event.”

ESPN has a team of 15 people on the ground in Brazil providing coverage that is being leveraged across all of its platforms. The work they do will be used for breaking news, analysis, digital features and shorts, and stories for broadcast and print. “All of our reporters are thinking multiplatform at all times,” says Stiegman. “At the World Cup, they are ESPN reporters, not specific to a delivery platform.” For example, Michael Davies and Roger Bennett, who are well known for their popular Men in Blazers podcasts on Grantland, are contributing daily blog posts to ESPN FC. In turn, segments of broadcast video commentary are available on the website and in ESPN’s apps.

To flesh out this multiplatform approach, ESPN has made significant investments in its digital delivery that will enable viewers to watch all 64 matches live online via an embedded WatchESPN video player on its responsive ESPN FC website, which it relaunched along with the ESPN FC app, earlier this month. Stiegman says that the updated ESPN FC app will be a “game changing service for fans. It will be a mobile home for anyone who wants to follow the ins and outs of the World Cup.”

A “huge step in ESPN’s digital strategy is personalization,” according to Stiegman. “Increasingly, we see the drive toward personalization. In more than a third of our visits, fans spend time in clubhouses and take a team-specific approach. They want the higher level stuff, but also want to follow their teams in depth.” To that end, the ESPN FC app starts with IP-based geolocation, and then prompts users to set which edition they want. Options include regional or specific team-centric coverage as well as language options that include Spanish and Portuguese. All matches will be available online in Portuguese via ESPN Deportes as well.

Another significant piece of the company’s strategy that has allowed ESPN to provide such extensive digital availability of this year’s World Cup is the company’s work over the past several years to improve authentication, particularly ease of use. “With WatchESPN, we’ve been working hard for some time to make it as easy as possible for fans to authenticate as cable subscribers.” ESPN currently has digital authentication deals with Comcast, Time Warner Cable and Dish.

“We really are focused on allowing viewers to access ESPN on the best screen available at any given moment. Maybe that’s mobile on a plane. Or maybe, like it is at my house, you’ll be watching on a tablet while your daughter watches Disney on your 60-inch TV.” While the goal with authentication has been to make signing in as easy as possible, increasing the breadth and depth of offerings via as wide a range of platforms as possible “is all about giving viewers a clear return on investment for taking the time to do so.”