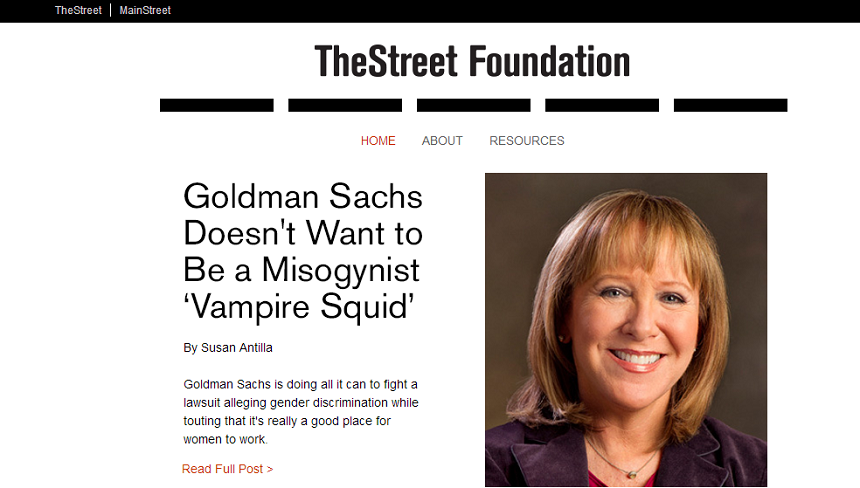 Soman credits DeMarse with suggesting the formation of a Foundation when she joined TheStreet as CEO in 2012. “Everyone loved the idea,” says Soman who believes that this initiative is an ideal fit with the organization and its larger objectives. She points out that co-founder Jim Cramer “has his Action Alerts Charitable Trust and a real commitment to giving back.” TheStreet Foundation is also consistent with Cramer’s initial vision for TheStreet—to bring Wall Street to Main Street.

While she says that the flagship site, TheStreet.com “addresses a relatively sophisticated investor,” TheStreet Foundation is intended to support the needs of anyone who needs more financial information. There is a gap in the market, according to Soman, who spent a good deal of time looking at the financial information currently available. While there are a lot of superficial tips and jargon-laden high-end investment advice, there is an unserved market of “educated people, who are experts at what they do, but not financial experts.”

She and the team at TheStreet also found a need for more investigative journalism that will tackle issues of corporate wrongdoing, government corruption and consumer fraud. “We want to support long form, in-depth, hard hitting, impactful journalism and give journalists a voice, specifically in the financial market.” As such, the Foundation will offer a Fellows Program, which will grant seed funding to investigative journalists. The Founding Fellow is Susan Antilla, an award-winning freelance journalist who has written for Bloomberg View, The New York Times and USA Today. She is also the author of Tales From the Boom-Boom Room: The Landmark Legal Battles That Exposed Wall Street’s Shocking Culture of Sexual Harassment.

In addition to investigative journalism and educational information and resources, TheStreet Foundation also plans to offer a wide range of survey data and infographics on its site, as well as information on financial literacy events. Soman says, “TheStreet is a small organization with lofty aspirations for our Foundation. To achieve our objectives, we plan on partnering for content we don’t already have and supporting the creation of information that is needed to offer a path to better financial literacy and practices for everyone.”