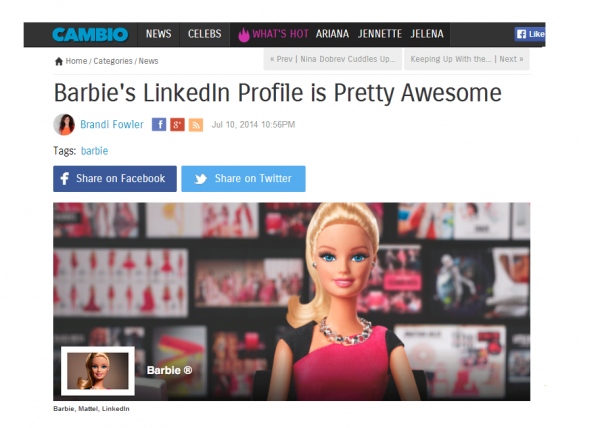 Reshma Saujani, founder of Girls Who Code has made inspiration her day job at the nonprofit organization she founded to inspire, educate and equip girls with the computing skills to pursue 21st century opportunities. And her work, and mission, is getting some “traditional” brands to take notice.

When Mattel wanted to create an entrepreneur Barbie with street cred, one of the women they turned to was Saujani. Susan Lyne, CEO of AOL’s Brand Group and Girls Who Code advisor also turned to Saujani when she wanted to create a site built by girls for girls.

The inspired connection between Lyne and Saujani led to AOL offering summer internships to five Girls Who Code alumnae. These young women are playing a fundamental role in the re-launch of AOL’s millennial-focused pop-culture site, Cambio (coming this Fall).

“Part of Reshma’s program is to build something you care about and present it. She focuses on what you can build if you learn to code, which is exactly the right focus.” During their internship, the girls will certainly do a lot of coding, but they are also helping to shape the Cambio brand’s editorial direction and building new mobile-first products.

Lyne been impressed with the impact the interns are making—including making the content “multifaceted like they are,” which includes an affinity for celebrity news (the current focus of Cambio’s content), but also “about issues that are really important them whether it’s a crush, weight, family relationships or world peace.”

The interns have also developed an inspirational meme generator and a contributor platform so that they—and many more girls like them—can participate in the site. “I love the idea of building because it can mean many different things,” says Lyne. “Just the idea of creating, not just serving or enabling. Doing the creating themselves is incredibly empowering.” Lyne was also pleased to see how the larger AOL team welcomed the Girls Who Code interns, “the minute we announced the program, I can’t tell you how many engineers raised their hands, but also people in sales, designers, editors…everyone wanted to find a way to help these girls have a fantastic summer.” They’ve been privy to sessions on advertising, analytics, privacy, computer security and more.

Given the fact that three of the five top positions at AOL are held by women, it isn’t surprising that this is an organization supportive of young women’s professional development. “I think it all starts with Tim,” says Lyne of the company’s CEO and Chairman. “He made it a goal to have three women on the board because there’s research that demonstrates that companies with three or more women on the board perform better. He was looking for whatever will give us an edge and having strong women is part of that.”

Building a structure that supports women internally is important. But perhaps even more so is spreading the #BuiltByGirls message through initiatives like these, where young women see that the products they use every day are actually built by girls, in the hope that it changes their perception of computer science.

And, as Lyne points out, “Media companies like ours reach many millions of people and we impact all kids of attitudes. It is important that we positively impact the way young women think about their possibilities going forward, and even impact the way technology and an industry evolves. This is an opportunity…and a responsibility.”