In total, more than half of the world (51%) or 3.8 billion people were internet users last year, up from 49% in 2017. Overall, internet growth slowed to about 6% in 2018. In response, sales of smartphones—a a primary internet access point—are declining since most of the world is already online. These are just a few of the major headlines from Mary Meeker’s annual Internet Trends Report 2019.

The report identifies market growth and concerns across the different business sectors. Highlights and trends include:

Meeker believes that the use of digital data and insights can improve the user experience. She outlines the following plan:

Meeker sources industry research throughout the report to support her findings and offer forecasts in the tech and venture capital world. She continues to examine the marketplace as an analyst would, identifying the new trends, companies, and business models for investment and her report is an annual industry-insider must-read.

Each year, analyst Mary Meeker — a partner at the Silicon Valley venture capital firm Kleiner Perkins Caufield & Byers — releases her massive Internet Trends report, with businesses scurrying to take advantage of her insights into what’s hot and what’s not. This year, Meeker released the report while at the Code Conference, for maximum high-level impact. There’s a lot to chew on, but here are the most important trends for content creators and online publishers. 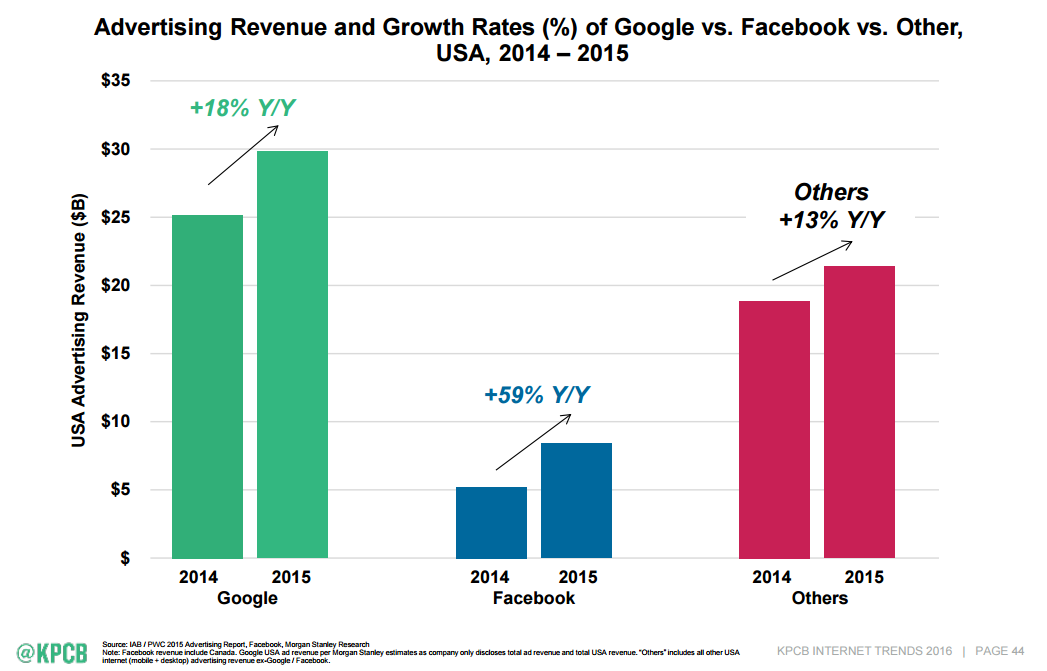 On another front, advertising growth has yet to actually reach its full potential because marketers aren’t spending enough on mobile. As Wired’s Davey Alba wrote, “They’re still committing too many of their dollars to so-called legacy media.” As such, the $22 billion that is spent on mobile advertising in the U.S. is a tiny amount of what it should be, according to Meeker’s report. Indeed, only 12% of all advertising right now is mobile. While this presents a boon for content created or optimized for mobile, it’s also a huge risk and concern for traditional media players, as Larry Downes wrote in the Washington Post.

One big hurdle for mobile is the rise of ad-blocking. Four hundred and twenty million people around the world are now using some form of ad blocking software on their mobile phones, according to PageFair. When looking at the reasoning behind the rise of ad blocking, including privacy concerns, the onus is on publishers and marketers. They must not only appeal to consumer behaviors, but also to their aesthetics and feelings of what good advertising should be. Advertising on Snapchat, for example, is in part successful because it’s short, sweet and integrated into the platform seamlessly so that it’s part of the user’s natural experience. (And it’s outside the realm of ad-blocking.)

Messaging and Visual Communication Rising
Among Millennials and Generation Z, visual communication is king. As Recode’s Noah Kulwin pointed out, “People worldwide shared almost twice as many photos in 2015 as they did in 2014, and almost half of that happened on a service owned by Facebook.”

And whether it’s a photo, video or live-stream — such as Candace Payne’s viral Facebook Live video trying on a Chewbacca mask — advertisers can very much take advantage of the sharability of visual communications. Take the Candance Payne example, as Larry Downes wrote in the Washington Post: She mentioned Kohl’s department store twice in her video — and that video was viewed more than 150 million times in one day. In turn, the company’s app leaped to the top of the charts in the iOS App Store. If user-generated video can redefine advertising in such a way, expect more videos with branded content.

And when it comes to messaging apps, that means commerce communication is officially entering the fold. “Messaging apps are continuously becoming the second home screen,” Meeker said during her presentation. If the best way to connect with Millennials — now representing 27% of the population, with a spending power that’s going to rise — is on messenging apps, then that’s the natural destination for advertisers. The rise of voice-recognition software on these apps also means that the commercial applications can’t be ignored. Perhaps dictating the purchase of a product via speech on a messaging app may not be far off.

India then serves as an interesting case study through which marketers can better understand how to target new Internet users. As Meeker discussed during her presentation, new Internet users are becoming increasingly harder to find because they come from poorer, developing countries, where the cost of a smartphone is a significant portion of a person’s income. The cost of a smartphone in India is relatively low compared to other countries, however, so it would behoove advertisers to capitalize on this market potential.