While the media and marketing worlds lose their minds over the metaverse, it’s worth bearing in mind that most of the purported benefits of that phenomenon already exist elsewhere.

The metaverse – whatever it ultimately looks like – is being built on the back of gaming audiences. From the platforms that early metaverse experiments were built on, to the community-based nature of interactions between brand and audiences on those platforms… it looks a lot like gaming with a new name. Besides, even if the metaverse actually emerges as a wholly new phenomenon, its audience will still bear a good deal of resemblance to gamers. So, products that serve this crowd are likely to bridge any eventual gap.

Either way, media companies must continuously attract new audiences to monetize in the race for subscribers and advertising spend. It also helps if those new audiences fit a particular profile that merits content development dollars as well. They need to be niche enough to have a community that is deeply invested in the topic and lucrative enough to be monetized effectively.

The largest niche on the planet

Gaming – the most lucrative entertainment medium globally – is certainly appealing in its own right. But importantly for media companies seeking new and valuable audiences, gaming offers scale characterized by numerous niches, each with the potential for product development that will attract, engage, and inform gaming communities.

Craig Levine is co-CEO at one of the largest esports organizations, ESL Gaming. He says: “There are so many niche communities within esports – and here ‘niche’ doesn’t mean small. I think ‘niche’ means focused. There are some very, very large niches in competitive gaming.”

Unsurprisingly, media companies with valuable IP continue to develop their esports plans. Warner Bros, for instance, has a hit on its hands with the platform fighter Multiversus, which sees exciting IP crossover. Meanwhile the latest Pokémon Presents on August 3rd opened not with information about its upcoming games, but the competitive scene that surrounds them. Esports titles like DOTA 2, CS:GO and Fortnite are perennially popular, with some achieving widespread brand recognition outside the gaming sphere.

Sports brands like Manchester United and the NBA have invested heavily in esports, from both grassroots and professional level. They recognize a growth industry when they see it.

According to the latest annual predictions from esports research specialist Newzoo global esports revenues will exceed $1.86bn by 2025, representing a CAGR of 13.4%. That is driven in large part by a rise in the size of the esports audience, with the global audience expected to reach 532 million by the end of 2022. The number of what Newzoo classes as “esports enthusiasts” is set to reach 261.2 million. This is this ‘niche’ that should set a fire under magazine publishers.

Charlotte Cook is MD of gaming-specialist agency Calm Consultancy. She says that the niches do exist within gaming: “When it comes to brands, advertisers, you do need to still segment them as different experiences exist on different platforms. A game on a mobile is very different from a game on a console.”

However, she states that the overall competitive gaming audience is growing. It is also broadening into demographics that advertisers are desperate to reach. Newzoo found that 74% of esports enthusiasts are full-time employees (compared to just 56% of the general online population), and around 44% fall in the high-income bracket compared to 33% of the general online population.

So, magazine companies looking to make some money around the world of esports specifically should adopt the role of bridge between brands and the community. Media companies like Future are already reaping the benefits of ecommerce based around high-value gaming audiences. The rise of esports also provides them with the ability to act as a trusted source for information related to high-value competitive gaming products.

Magazines’ core strength has always been around creating a compelling narrative. Just as with real-world sports stars, the focus of that storytelling around esports should be around the individuals within the space. Those esports stars are effective influencers within their community, which influencer-specialist marketers believe delivers the best rate of conversion on any ad spend. Moreover, since magazines are seen as a safe space for brands, it creates a new channel for the brands who seek to reach those audiences but run the risk of appearing opposite unsuitable content on the traditional esports platforms like Twitch.

Levine explains: “We’re currently in a world where players and influencers bring the power of creators, and that means a sort of this infinite distribution opportunity. The superstars of esports that come out are these incredible influencers who create tonnes of fandom around the games they focus on.”

That’s backed up by the rise of the gaming influencer, many of the most popular of whom are in the esports space. Small wonder that brands including Netflix, the NBA, and

Formula 1 have partnered with those streamers to expand their distribution channels for content among gamers.

Eyes on the prize

Much of the focus for the intersection of media and esports lies is still related to broadcasters bidding for the rights for esports competitions. Game companies like EA and Blizzard are betting the farm on esports broadcast rights, and arguably the prices commanded for those licences significantly undervalue the size of the audience.

Daniel Schnapp, esports specialist and partner at Sheppard Mullin, told Variety: “If you look at the most watched [and] consumed esports events over the last five to 10 years, they rival that – in terms of overall eyeballs and audience participation in viewership – of some of the largest sporting events that are put out by the traditional sports leagues.”

But, as with the ecosystem that has grown around traditional sports, there is space for magazine publishers to launch dedicated esports-related brands. The ecommerce opportunities related to the niche communities and ability to boost the profile of the pro players would benefit not just the magazine company, but the esports ecosystem as a whole. That virtuous circle of increased audience, attention and ad spend benefits the entire vertical – and magazines can claim a share of that pie.

For media companies, then, the question shouldn’t be “should we launch an esports title”, but “when should we?”

Mary Meeker’s annual Internet Trends Report is often referred to as the state of the union for the media and technology industry. In it, Meeker—a partner at venture capital firm Kleiner Perkins Caufield and Byers (KPCB)—highlights the biggest internet developments for the coming year. Her report provides insights on digital adoption, identifies which interfaces are resonating, and examines the dynamics of ecommerce. 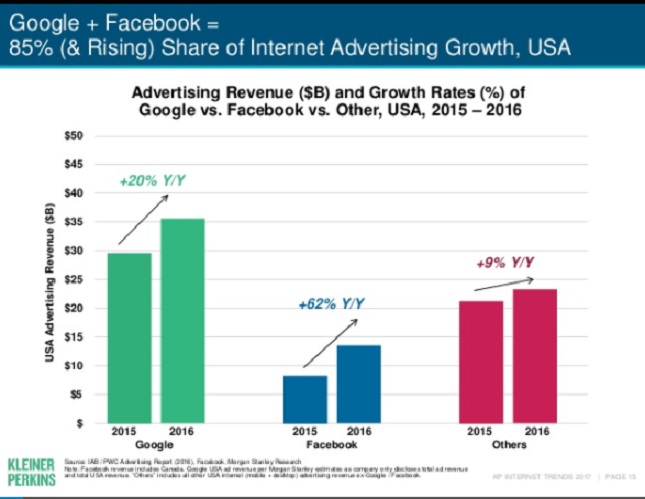 Some key takeaways from her presentation:

The marketplace is rapidly advancing and continues to grow in importance. According to Meeker, the top 20 Internet companies—many of which were not around before 1995—have a market value of nearly $3 trillion. New media platforms and information technologies are transforming new market economies. Yet it is important to note that Meeker sees new opportunities across multiple platforms to connect and add value for consumers.