The lack of metrics and tracking in the world of podcasts has kept many advertisers away from the space. However, podcasting has been a boon for direct response advertisers like Squarespace, BlueApron, and Samantha Bee’s favorite, MeUndies. Apple recently announced that it will finally share analytics on listener behavior in aggregate. This is a tremendous advancement for podcasting. The data will help producers understand what content hooks listeners and where they drop off. But, beyond measuring listener behavior, Slate wants to answer one big question for brand advertisers: Do podcasts work?

To answer this question, Slate Group Studios partnered with Prudential Financial Inc. on a program called Wealth Wits and paired it with the first study of it’s kind to assess the impact of a branded podcast program.

Slate was an early pioneer in podcasting and has been a leading force in the space for more than 12 years. As listeners flock to the medium, brands are keen to experiment. In 2015, Slate created its first branded podcasts with HBO, GE and Prudential. However, the lack of measurement has hampered aspirations to build out robust, long-term podcast marketing strategies. 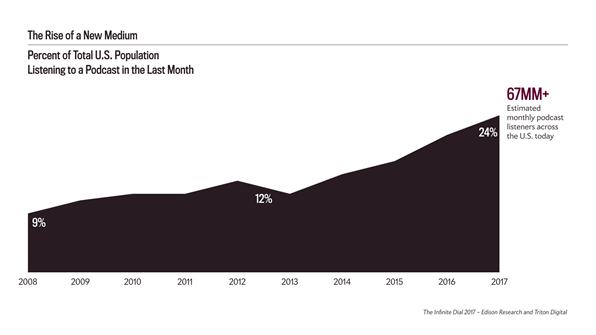 The Prudential Wealth Wits program offered a customized content experience powered by the listener’s own financial behavior. The capstone of the campaign was an interactive self-assessment quiz, promoted on Slate, that served up a personalized podcast. The branded podcast was created in partnership with Prudential and hosted by journalist, comedian, and author Faith Salie. Wealth Wits intended to help people of all walks of life think about their retirement and plan for the future.

Slate Group Studios created a custom methodology in order to understand and assess the overall impact of the Wealth Wits campaign on Prudential’s brand favorability. The study looked at overall brand awareness, favorability and consideration. GFK Research measured the results.

One positive result was that nearly 20% of survey respondents reported that they were very or somewhat likely to recommend Prudential to their friends and family.

Because this was a cross-platform program with interactive, display and audio elements, the study allowed us to compare the impact of different media types. These comparisons produced the most exciting findings, offering up valuable, statistically significant evidence of podcast advertising’s effectiveness. In short, the study found that podcast units were more than twice as successful than banner ads in driving statistically significant lifts in Brand Awareness (+14%) and Ad Recall (+21%). 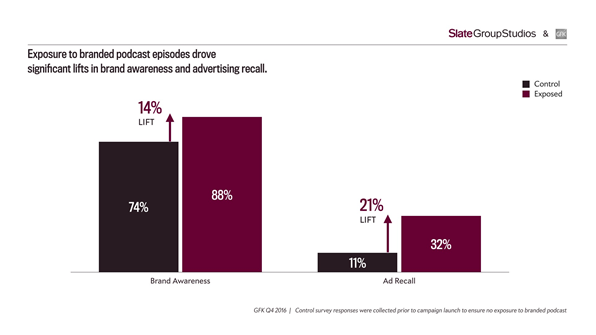 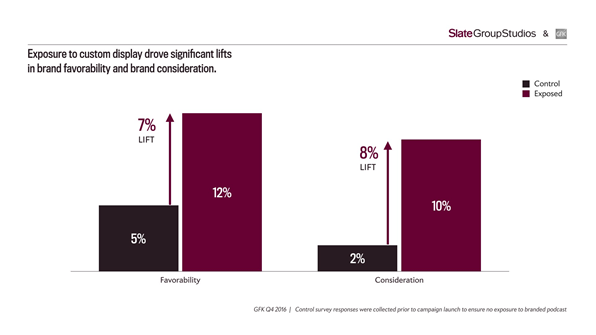 It was encouraging to see the success of Wealth Wits reflected in meaningful metrics. However, it’s even more exciting that the results offer up much-needed data on the effectiveness of branded podcasts as a medium. While the creativity afforded within the podcast space and the deep engagement have made branded podcasts desirable, the data to support the investment has often been elusive. With our custom methodology, the industry at large now has a model to follow and hard numbers to measure against.

We can now say emphatically that, yes, podcasts do work.

Charlie Kammerer is Chief Revenue Officer of Slate, where he focuses on developing ways for brands to tap into Slate‘s audience through editorial content, podcasting, video, and custom programs. Kammerer joined Slate in 2017 after spending twenty years at Time Inc., where he was a brand builder and revenue generator across a diverse portfolio of brands, including Real Simple, Fortune, Food and Wine, Cooking Light, Golf, and This Old House. He’s based out of Slate‘s Brooklyn office.

Jim Lehnhoff is Vice President at Slate Group Studios, Slate’s in-house branded podcast agency. Formerly, Jim was Director of Advertising Strategy at Gawker Media, where he was responsible for overhauling the company’s go-to- market strategy while managing a team of six strategists. Prior to Gawker, Lehnhoff cut his teeth at Serious Eats, Curbed Network, and The Onion.