The Facebook’s News Feed, introduced in 2006, was once a strong source of traffic for many publishers. News organization utilized the intermediary platform to grow their audiences. The social sharing of news also altered the direct-to-consumer paradigm.

Earlier this year, Facebook announced that their News Feed would prioritize posts from friends and family over news content. While some news publishers faced modest declines, others reported significant ones. Chartbeat, a content analytics platform, provided data showing Facebook traffic to publishers declined 6% since the beginning of January. However, LittleThings, a publication focused on feel good stories and other content for women, claimed they lost 75% of their referral traffic due to changes in Facebook’s New Feed and subsequently shut down.

In the three months after the News Feed changes, in terms of overall traffic, the investigative organizations saw small changes in both the number of users and the number of sessions. In contrast, the entire single-subject cohort registered growth for these two metrics.

The analysis also looks at the composition of traffic, where the traffic is coming from, by using the Google Analytics channels Direct, Email, Organic Search, Other, Referral, and/or Social. Referral traffic was most consistent; increasing both in users visits and sessions. Only two of the eight non-profit publishers show social referral increases. Not surprisingly, Facebook referrals closely follow in line to social. 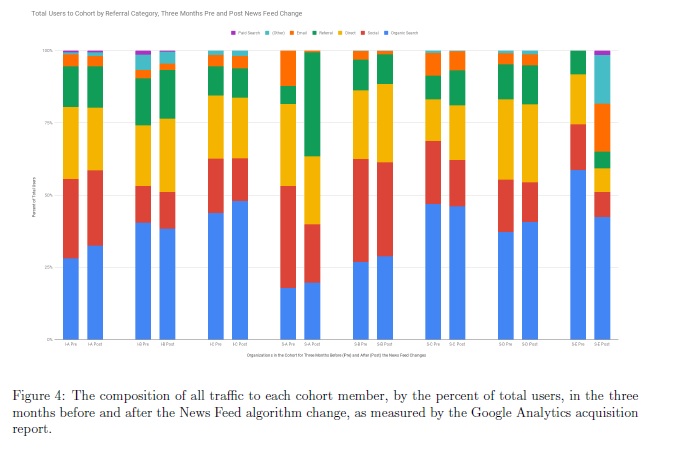