Media companies have a well-documented love/hate relationship with Google. Though search engines undoubtedly make content discoverable to vast audiences, the disintermediation of sources has devalued the brands that invest significant resources in creating credible information. Google also dominates digital video (YouTube) and is a major force in mobile (Android), giving it even more power over content distribution, consumption, and monetization. So, publishers are rightfully wary when Google offers to support journalistic endeavors.

New research from The European Journalism Observatory examines the impact of the Google News Initiative has had journalism. This 150-million-euro program was launched in 2015 “to promote innovation in journalism.” Over the past three years, the program has invested 115 million euro in journalism-related projects. (Google, meanwhile, has pledged $300 million over three years to support journalism initiatives. While this is a not-insignificant sum, it is important to note that the bulk of Google’s $110 billion 2017 earnings came from digital ad revenue and that parent company Alphabet is valued at $800 billion.) 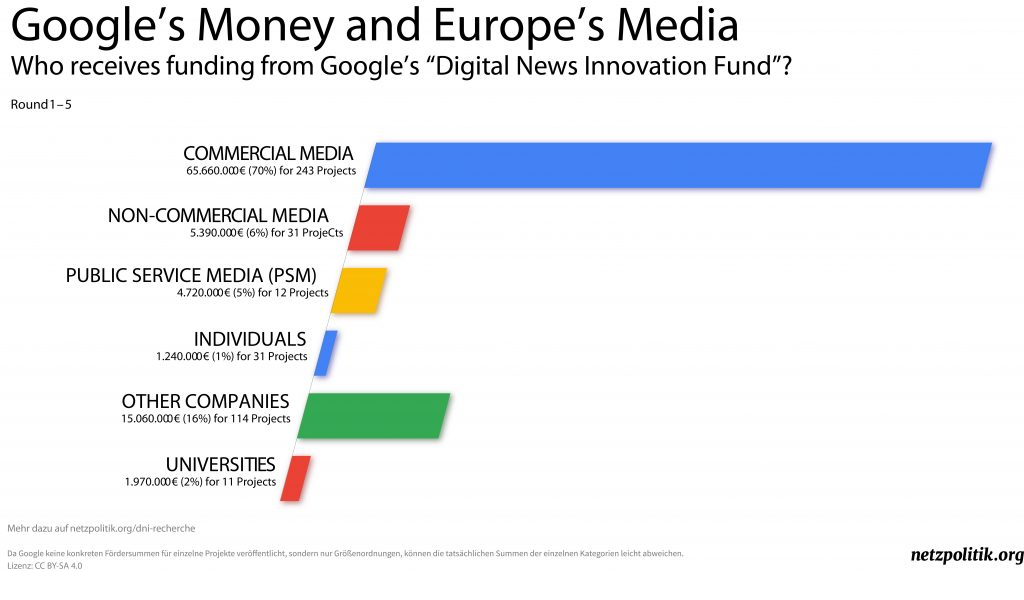 The EJO’s data, which is based on a project registry that they scraped from the Digital News Initiative (DNI) website and then coupled with additional reporting, sheds light on who Google gives money to  and what kind of projects are funded by the Internet giant. They found that the typical recipient of Google funding is a commercial legacy institution in Western Europe. Meanwhile, non-profit news organizations and public-service media rarely receive funding.

A large part of Google’s money goes to “the media establishment,” with more than half of the European funding allocated to long-standing commercial publishing houses, including projects at Trinity Mirror, the Telegraph Media Group, and Thomson Reuters in the UK.

It is significant to note that Google funding comes with one major condition: It does not fund content per se, but rather projects that “show innovation.”

The data offers some insight into what innovation means from Google’s perspective:

The big question, of course, is what Google is trying to achieve with its sponsorship. Significantly, the research points out that while projects may appear to compete with Google products, they mostly complement Google’s existing online ecosystem. In fact, the research revealed that several of the projects are based on Google services, which provides an additional benefit to Google in exchange for its support.

Ultimately, it is impossible to view Google’s investment in news (or academic research) as altruistic. As the EJO’s research states, the funding it gives to media institutions actually helps Google safeguard its long-term interests. Citing the company’s evolution from search engine to central node for the production and distribution of news, they find that, “Google has built an ecosystem that no publisher can ignore.” Neither can publishers ignore the implications and motivations of Google’s patronage.