Americans recognize the tremendous power that internet companies like Google, Facebook, and Twitter have over the news and information obtained on these platforms and they question the practice of filtered content. The Knight Foundation and Gallup examine consumer opinion on curated content in their new report, Major Internet Companies as News Editors. The research shows that consumers are more negative (54%) than positive (45%) about the idea of major internet companies targeting information to individual users based on their interests, internet search activity, and web browsing history. 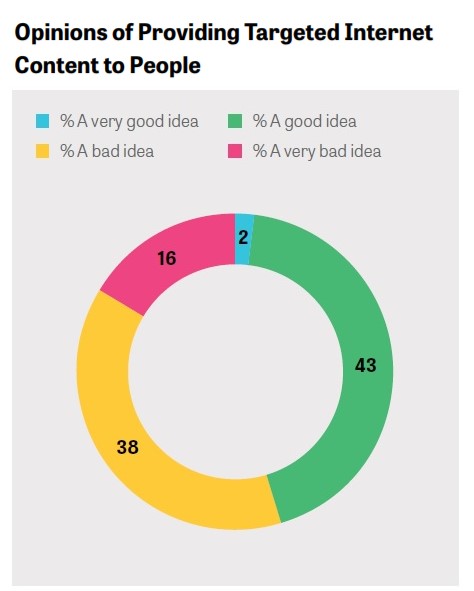 Interestingly, younger respondents are slightly more positive about receiving targeted information (51%) compared to adults, ages 35 to 54 (46%) and adults 55+ (39%). However, across demographics, on thing is for certain: Consumers want full transparency. Nearly nine in 10 adults believe that internet companies should be transparent about their methods for delivering content and should publicly disclose the algorithms they use.

Consumers recognize that the primary reason for internet companies to show personalized content is to monetize consumer usage of their platforms. More than seven in 10 say that the reason why major internet companies show certain news items to certain people is to increase the effectiveness of advertisements (79%) and to keep people interested so they regularly visit the website or use its app (74%). Both reasons revolve around revenue generation. Only one in 10 Americans (12%) believe that internet companies personalize information to help support a more informed society by connecting people to important news. 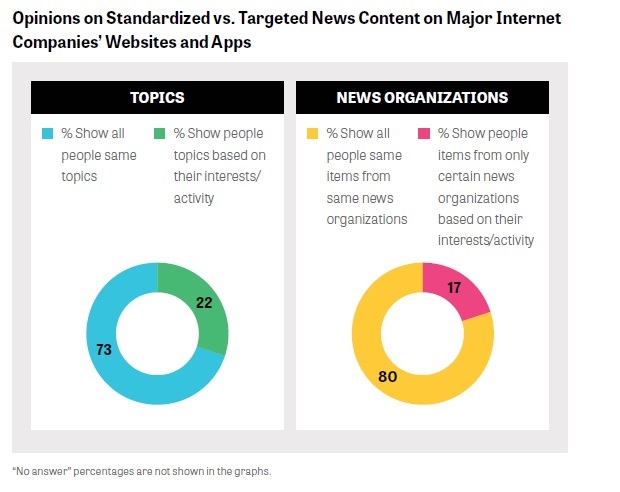 It cannot be denied that major internet companies now function as intermediaries between consumers and their news. According to Pew Research, about a quarter of all U.S. adults (26%) get news from two or more social media sites, up from 15% in 2013 and 18% in 2016. However, as consumers become increasingly reliant on these platforms for their news, they expect transparency about how the companies determine which news items appear in their news feeds.