“Wayne’s World for Radio.” That’s one of the ways in which Steve Jobs described podcasting in 2005. That was the same year that Apple put podcasts on iTunes and The New Oxford American Dictionary named “podcast” its word of the year.

Citing low barriers to entry, Jobs observed how “anyone can make a podcast … and get a worldwide audience… We see it as the hottest thing going in radio,” he added.

Thirteen years ago, there may have been an element of hyperbole in that assertion, but it’s certainly true now. The so called “Serial Effect” – named after the phenomenally popular 2014 series has enjoyed more than 175 million downloads. Its success sparked new levels of interest in the genre, and is often seen as the catalyst for a new golden age of podcasting.

Great storytelling is only part of the story. Podcasting has growing interest from advertisers and brands, technological advances that make it easier than ever to listen, and increased consumer awareness of this medium. These forces have coalesced to help take podcasting to the next level.

Here are seven reasons you should be paying attention to podcasting’s growth:

1. If content is king, audiophiles are spoilt for choice

Anyone can create a podcast. As a result, the genre is home to everything from time-shifted radio broadcasts (from the likes of NPR, the BBC et al), through to content from publishers not traditionally associated with audio (like Trinity Mirror and the New York Times). And many others have jumped on board from students, stand-up comics, Hollywood celebrities like Alec Baldwin and Anna Faris. (Heck, I even produce one for my J-School.)

Fast Company, citing Apple’s own data noted, how iTunes alone is now “home to over 525,000 active shows, with more than 18.5 million episodes available, including content in over 100 languages.”

2. Podcast listeners are a growing – and attractive – audience 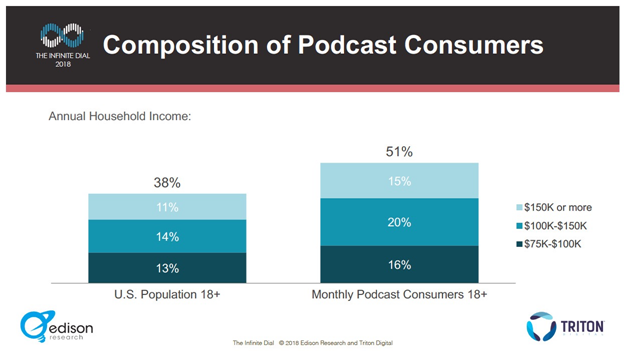 It’s estimated that 73 million Americans, listen to podcasts each month. That’s akin to 26% of the population aged 12+ (up from 12% just five years ago).

Typically, podcast listeners tend to skew younger, are more likely to have a college degree and have higher than average household incomes, according the annual report from Edison Research on podcast listeners, published last month, reinforcing 2017 findings from Nielsen.

Nielsen has also highlighted – in a quarterly podcasting insight guide for marketers – how “as the audience for podcasting grows larger each year, it also grows more diverse.”

“In 2010,” they wrote, “ethnic audience represented less than 30% of all people who said they listened to a podcast in the past 30 days. In 2016, the share of listening from this segment stands at 36% of the total.”

3. Podcast fans really love the medium and listen a lot

Diving deeper into Edison’s data reveals the extent to which podcast fans truly embrace this audio format. (A 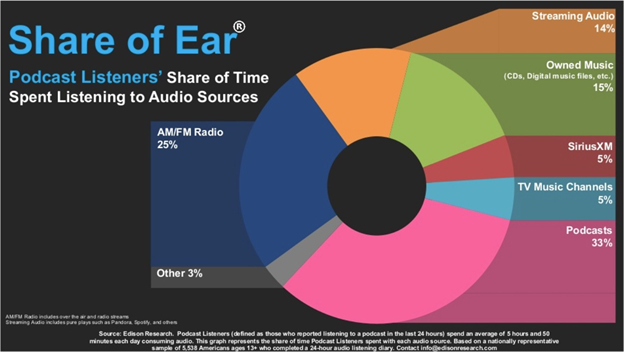 Although the number of weekly podcast listeners drops to 17% of the US population (from 26% who listen at least once a month), this group typically listens to 6 hours and 37 minutes of podcasts each week; with 17% of this cohort listening for 10 hours or more.

On average weekly podcast listeners consume seven podcasts a week. Their passion for this type of content is such that podcasting accounts for a third of all audio listening that they do.

4. Advertisers and Brands are waking up to podcasting’s possibilities

U.S. podcast advertising revenues were forecast to top more than $220 million in 2017. That means it is up 85% from 2016 – where the market was worth $119 million – according to a 2017 Podcast Advertising Revenue Study from the Interactive Advertising Bureau (IAB) and PwC. 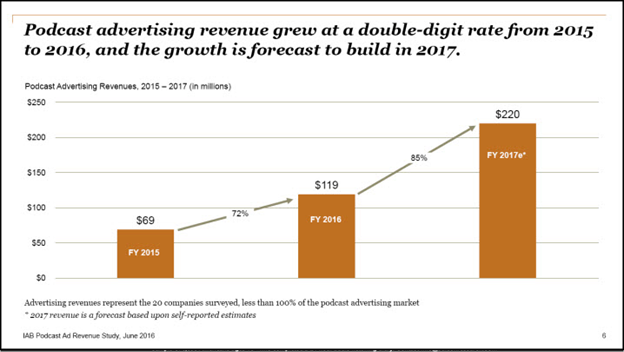 As reporting metrics continue to improve, (one high profile example of this is Apple’s podcasting analytics service which launched in Beta form at the end of 2017) Lex Friedman chief revenue officer at Midroll predicted that “by the end of 2018, we’ll be able to sell on a listen basis.” He added, “At the end of 2018 none of the objections we get from brands will be based on measurement.”

The financial potential for some media companies in the podcasting arena is perhaps best exemplified by Slate. In January, they revealed that podcasts now account for 25% of their revenue.

As well as growing their podcasting team, Slate also offers exclusive (and ad free) podcast content to people signed up to their Slate Plus membership program. The New York Times recently did something similar with their new Caliphate podcast, previewing it to subscribers before it was made available to everyone.

Gimlet Media, a digital media company and podcast network that’s also based in New York, previously raised $6 million in Series A funding as part of a $30 million valuation. And in a super smart move, the story of Gimlet’s early days was captured by their popular StartUp podcast, the first season of which documented how the company was founded. 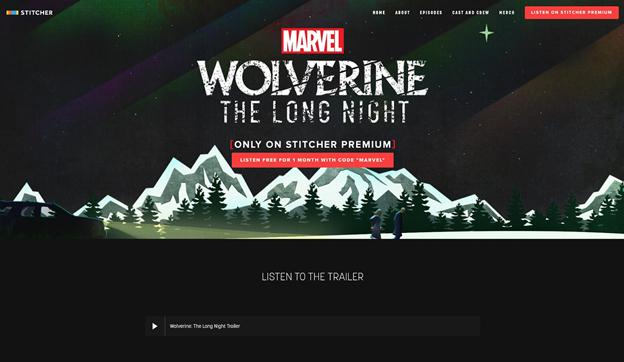 Meanwhile, brands and content creators are also embracing the possibilities of having audiences pay for shows. Marvel has launched a scripted podcast, Wolverine: The Long Night, you have to be a premium member of the Stitcher platform ($4.99 a month or c.$35 a year) to access it. And Portland based journalist Corey Pein offers a weekly members only version of his “News from Nowhere” podcast.

Historically, both media and non-media brands like Slack and Red Bull  have used podcasts to build a “deeper connection” with their audiences and enhance their brand. GE (General Electric) sponsored the mystery series The Message. However, these efforts have typically been free.

Alongside a recognition that some audiences – both niche and mainstream – are willing to pay for high quality audio content, the creativity and reach of the medium is also attracting the attention of other media channels. A key trend to watch in 2018, as Variety has identified, is the potentially fertile territory podcasts offer for TV and Film companies.

“Last Halloween,” they wrote, “Amazon released “Lore,” based on the hit podcast by Aaron Mahnke about historical, supernatural tales. The digital giant has also ordered two seasons of “Homecoming,” a political thriller produced by Sam Esmail (“Mr. Robot”) that will star Julia Roberts. “Alex, Inc.” a workplace comedy starring Zach Braff, will debut on ABC this spring; it’s based on “Startup,” a podcast that chronicled the rise of Gimlet Media, one of the most prolific companies making podcasts.”

“And on the film side,” they add, “Annapurna Pictures has optioned an episode of “Reply All” for a feature directed by Richard Linklater and starring Robert Downey, Jr.

Many of podcasting’s great leaps forward have been as a result of technological innovations. (This interactive timeline from late 2015 showcases many of these.)

Innovations have included the creation of a dedicated section on iTunes in 2005, smartphone take-up, the creation of a standalone iOS podcasting app in 2012, and the increased ease of playing content from your phone in the car. Jump forward to 2018, and the rise of smart speakers is having an early impact on podcast listening.

Last summer, the annual Digital News Report, from the Reuters Institute for the Study of Journalism at Oxford University, demonstrated the early potential for services like Amazon Echo and Google Home, which voice controlled digital assistants being used for breaking news by CNN, and other publishers such as the Wall Street Journal, BBC World Service, and German media organizations Spiegel and Bild.

“Today, 18% of Americans 12+ (an estimated 51 million people), live in households that have at least one Smart Speaker,” Edison Research said in March. “This means that Smart Speaker ownership has more than doubled from 7% just one year ago, which shows Smart Speaker adoption at a faster rate than the early days of the smartphone, which showed only 4% growth in a comparable timeframe.

There were just 8,000 known shows when Steve Jobs talked about podcasting at the 2005 Apple Worldwide Developers Conference (WWDC). At the time, monetization opportunities were typically limited to baked in ads and presenter reads. Since then, podcasting has witnessed phenomenal growth. User numbers, advertising dollars, and the sheer number of shows, are all at record highs.

The emergence of connected cars, new in-car dashboards, the continued rise of smart speakers and Google’s new podcasting strategy (explored in a five part series last month by podcast makers Pacific Content) will encourage further opportunities for growth. Particularly as podcasts begin to appear in our search results and opportunities for listening across different devices and contexts (e.g. in-home, in-car and on the move) becomes increasingly seamless. As a result, expect to see more brands, media and tech companies, as well as marketers experimenting with this space in 2018.

Podcasting’s golden era has only just begun. There are opportunities for sponsorships, subscriptions, brand extensions, and live events. Needless to say ,that not everyone will be able to leverage these opportunities. The podcasting space is already crowded and it’s growing and becoming more competitive. Standing out from the crowd, as with any market, is a key challenge when it comes to both reach and monetization. There’s no cookie cutter model for success, but there are already plenty of terrific examples out there that highlight the myriad of different podcasting paths that marketers, brands and media companies can explore.