That’s the big lesson Spirited Media learned at the end of 2017, an awakening of sorts for us at the parent company of Billy Penn in Philly, The Incline in Pittsburgh and Denverite in Denver.

Now don’t get me wrong, we believe still that there are companies in and around our cities that are interested in partnering with us to reach our audiences — which are generally young, affluent and very civically engaged. And we’d had an encouraging start to the year by pursuing display ad sales. We needed that success to continue; that’s what we built our budgetary projections on.

And then that early ad success faded. It stands to reason why, of course: Going head to head with Facebook, Google and the largest newspaper websites was always going to be tough, And our staffs (no larger than six doing editorial work) can’t tell the same traffic story as sales folks repping newsrooms 15-20 times that size.

Instead, we looked at all the other ways we’ve been able to grow revenue, and prioritized those internally into three tiers. We stuck display advertising at the very bottom. In other words, we’re happy to get it, but we can’t burn staff time and effort to chase it. We’ve got bigger things in mind. 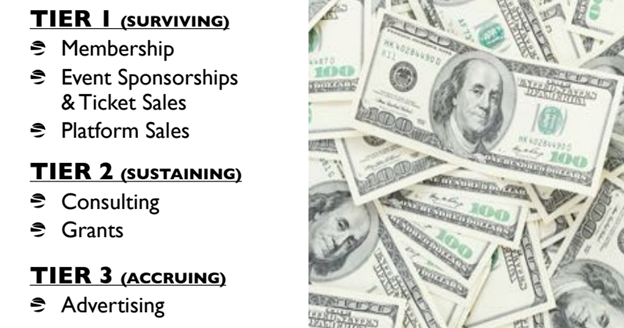 There are three things in Spirited Media’s most important revenue tier: the first is sponsorships and ticket sales for the events we’ve become so adept at organizing. The second is a membership program we’re rolling out in the coming weeks across all our sites. And the third is offering our custom platform for others to use. Let’s talk briefly about each of them.

Billy Penn launched in October 2014 – I was the site’s editor at the time – and we began hosting the first of our events a few months later. At the time, our staff numbered five people – myself, a community manager and two reporter/curators, and a brand new sales and events director. So, when we decided to start getting our audience together in person, putting together a lot of programming for those events wasn’t realistic. The same people building that event were the ones building our daily news report, after all. So the events  (we tried many, but what worked best were happy hour gatherings)  were very light on the programming. And when I say “light,” I mean we’d maybe grab a microphone for 20 minutes of a two-hour event.

These events proved incredibly popular with our audience and they had several things that recommended them over intrusive advertising on our site. One, the events lasted for a set amount of time; two, the events could only hold a certain number of people. In other words, we were able to create the scarcity that is nonexistent in a land of infinite Web pages. So events — the smart execution of them, ticket sales to attend them, and sponsors to underwrite them — are one of the pillars in our most crucial revenue tier. And, of course, events (and the potential early access to their tickets, or even their planning) will play in very heavily to the next item on our revenue punch list.

One of the things I consistently heard from Philadelphians as I walked the streets of the city was how much those who read Billy Penn loved it. Not just liked or respected, but connected with in a visceral way. So as we looked at how to build a business model that could withstand the seismic shift rocking the ad-supported media world, we of course considered whether we could turn that loyalty — hell, that love — into monetary support. But we can’t make this happen alone, so we’re working with the News Revenue Hub (Motto: “Fortifying the public’s access to quality journalism by helping news organizations build sustainability”), a spinoff of the stellar digital operation Voice of San Diego, a company that’s helped many newsrooms figure out how to turn their audiences into members. We’ll launch membership across our sites in the next few weeks, directly making a pitch to our readers that the work they’ve been consuming requires their direct support to continue. That’s because, plainly speaking, it does.

We’re proud to be a company that puts our users first. Editorially, that means we pay attention to what we think people want to know. And we’ve also committed to respecting their time and their experience online. That means unlike other news providers’ sites, we don’t pop advertisements up in front of the story you’re trying to read, or force an auto-play video into your quiet office, or load up the top, middle and/or end of your story with some photo you just won’t believe about a 70s TV show star. We try to respect people’s time and their attention.

How’s that working out for us? Well, our research shows that more than half our audience is under age 35, and 75% of our readers are under age 44. That’s a startling figure for a media company, and it’s due in no small part to the way we’ve built our sites, using a custom WordPress theme that gives us what we think are clear advantages in the market:

And we’re finding that this suite of tools is attractive to other small publishers that are also seeking revenue that’s immune to the whims of Facebook and Google. In fact, we’ve closed one deal with a publisher to provide them the same tools we’re using, and following up on other requests about it that have come over the transom. We’ve seen enough interest, in fact, to prioritize platform sales as part of our most crucial revenue streams in 2018.

Another thing we’ve heard through the course of our existence is that people were interested in starting a “Billy Penn” newsroom in their city, but owned and operated by them. Until now, we have not pursued those arrangements; however, in the course of our reevaluation, we’re willing to explore arrangements like this.

My boss Jim Brady, the former editor-in-chief of Digital First Media, former editor of washingtonpost.com, and a former news executive at AOL, has also consulted at many of the world’s biggest and best media brands — ESPN, USC and The Guardian, among them. Our VP of Product, Brian Boyer, was most recently the Senior Editor for Visuals at NPR; he came there after building the News Apps team at the Chicago Tribune. Me? I’ve been the Executive Online Editor at the Philadelphia Inquirer, and the top digital editor in two of Hollywood’s oldest news institutions, Variety and The Hollywood Reporter.

Among us, we’ve worked in newsrooms covering local, national and international news; in verticals (sports, entertainment, politics), launched departments and won awards for videos, innovation, public service and more. And we’re finding interest in accessing that expertise among other media companies, which out of necessity have cut their digital workforces down in the face of the ad cataclysm.

So we’re putting out our consulting shingle, and negotiating with those seeking everything from advice in reaching the audience we have now or the audiences we’ve reached in our past. Why isn’t this a Tier One revenue stream? Simply put: bandwidth. While we can hire developers should interest in our platform take over, we can’t easily clone ourselves to grow a consulting arm. But the money we make in this fledgling endeavor can help extend our company’s runway as we push toward profitability.

We’ve already received grants to support our work —we hosted a Knight Foundation fellow for one year in Philadelphia, and are the proud recipients of a $106,000 grant for work on a Playbook for Mobile News. We’re also finalists for a Report for America grant, which would support a Spirited Media reporter working in Pennsylvania’s state capital of Harrisburg. These kinds of efforts can help underwrite important journalism in our cities while easing the burden on our budgets. In addition, a two-year partnership with Politifact funded a reporter position to help us fact-check Pennsylvania, thanks to a grant from the Democracy Fund. So we’re no stranger to grant-funded journalism, and are actively seeking out new ways to bring it into our newsrooms.

Finally, we’re not going to say no to companies that only want to buy space on our sites. But, as we said, it’s just not a great use of our time to sit through endless agency meetings on the off chance that we score the rapidly declining dollars to spare, once Facebook and Google gobble their share. We’re delighted with the roster of repeat advertisers we’ve had across all our sites, of course, and hope to continue working with clients as diverse as the Philadelphia Eagles, Comcast and Beneficial Bank — but, as often as possible, we’re hoping to convert those advertisers into sponsors supporting the events that are increasingly part of the future of our businesses.

We’re confident that future is bright. After all, local news is a lot closer to our users than the national and international sources. We’re down the street, just around the corner from our readers. It’s sobering but heartening to come to the realization, as a company, that those readers are even more directly responsible for our future than we’d first considered. But then again, that makes sense. We’re always telling them how important they are. We’re now giving them the opportunity to prove it.