Public trust in the media is at an all-time low, yet Americans still believe that the media plays an important role in today’s democracy. A new report from Gallup and The Knight Foundation, “American Views: Trust, Media and Democracy,” reveals that more than eight in 10 Americans (84%) believe the media either has a “critical” (44%) or a “very important” (40%) role in democracy. So, if journalism is essential to the foundation of democracy, why is its trust in such a fractured state today?

The Gallup/Knight Foundation research provides several insights to this question. The research identifies the spread of inaccurate information on the internet as one of eight leading consumer concerns. In fact, three-quarters of Americans (73%) state the “spread of inaccurate information” as their top concern, with young adults, ages 18-29, highest at 80%. Consequently, adult’s top concern centers on the “distribution” of false news and information.

The spread of false news and information is further intensified by the sharing and forwarding of news stories, a common practice among consumers today. In particular, social media offers an easy and accessible gateway to share information. Close to two-thirds of Americans (64%) state they frequently/occasionally share news stories with friends, family, or social media followers.

The Gallup/Knight research suggests that Americans are beginning to recognize the pitfalls of social sharing when ideological viewpoints and biasness are not always vetted properly to ascertain credibility. In fact, more U.S. adults believe that citizen videos (58%), the internet (57%), news aggregators (54%), and cable news (52%) have a more positive impact on the U.S. news environment than social media (42%) sites like Facebook and Twitter and political leaders using social media to directly communicate to users. 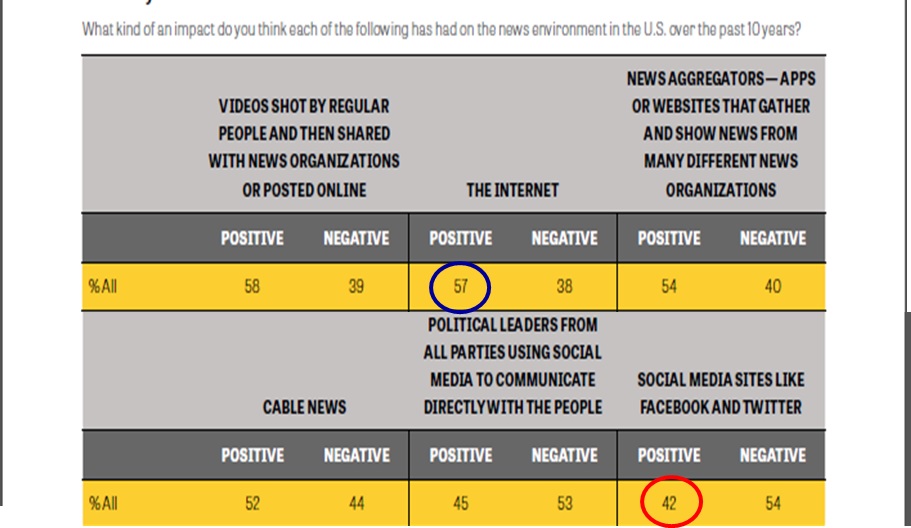 What exactly do consumer view as fake news?

The Gallup/Knight Foundation defines fake news as “misinformation with the appearance of legitimately produced news but without the underlying organizational journalistic processes or mission.” The research found that consumers have a broader sense of fake news and include: presenting false information as if true, reporting stories before facts are checked, slanting stories to depict a specific point of view and accurate stories showcasing political views negatively. 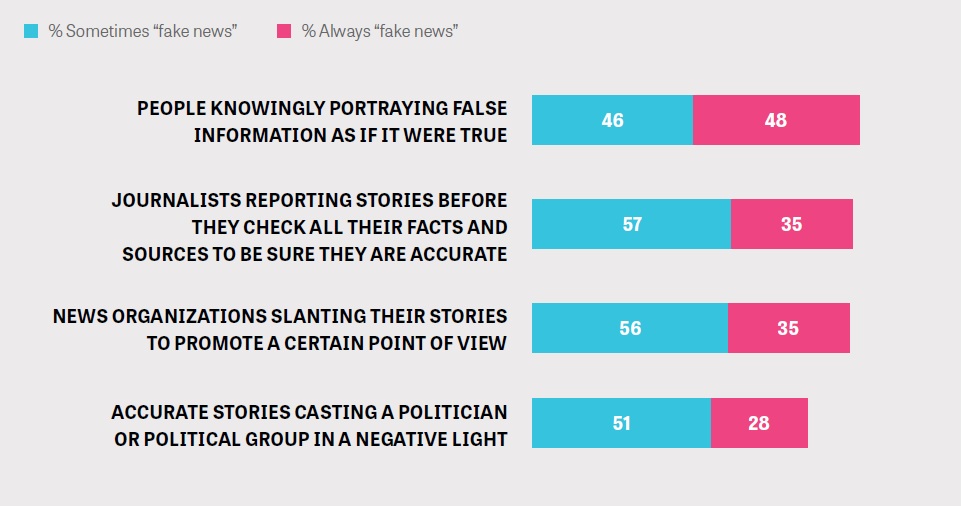 With so many news sources available, Americans find it hard to stay up to date and informed. Interestingly, even with numerous news outlets, consumers report difficulty finding a balanced source. Four in ten respondents (44%) state that they cannot name an objective source. While consumers also seek news aggregators, more than half of users (57%) are concerned with their method of story collection. Most often these hidden algorithms are not shared.

U.S. adults also recognized political affiliation as a large influencer on the views of the news media. More than half of democratic respondents (54%) report a very or somewhat favorable opinion of the news media. However, the opposite can be said of republican respondents, where more than two-thirds (68%) view the news media in an unfavorable light. Further, respondents report confusion when it comes to sorting out the facts (41%). Democrats tend to be informed about current events and more confident that they can sort out the facts (52%). Republicans on the other hand are more skeptical about sorting out the facts are Republicans (52%)

While Americans have access to more news media outlets than ever before, it a complex ecosystem to navigate. Distribution, aggregation and technology are all strong influencers of the news as well contributing to the proliferation of misinformation in the public domain. Supporting trustworthy publishers and journalists is more important than ever before so that they can distil accurate information and weed out the inaccurate in order to safeguard the democracy of the media.