Fake news reaches one in four Americans, according to a new research study from Brendan Nyhan of Dartmouth College, Andrew Guess of Princeton University, and Jason Reifler of the University of Exeter. The research provides the first individual-level estimates of visits to fake news websites. It analyzes web traffic data gathered from a sample of 2,525 Americans during the final weeks of the 2016 election campaign, from October 7 to November 14, 2016. Survey questions are also included in the analysis to provide insight into demographic and attitudinal variables and visits to fake news websites.

It’s important to note that fake news reached only a subset of Americans. Almost six in 10 visits to fake news websites came from 10% of people. Dr. Brendan Nyhan identifies these people as “voracious consumers of hard news” and “people intensely engaged in politics.”

The research examined the URLs visited by a respondent immediately prior to visiting a fake news website. The association between Facebook usage and fake news website visits offers a direct inference in identifying Facebook as the most significant facilitator in directing people to fake news websites. 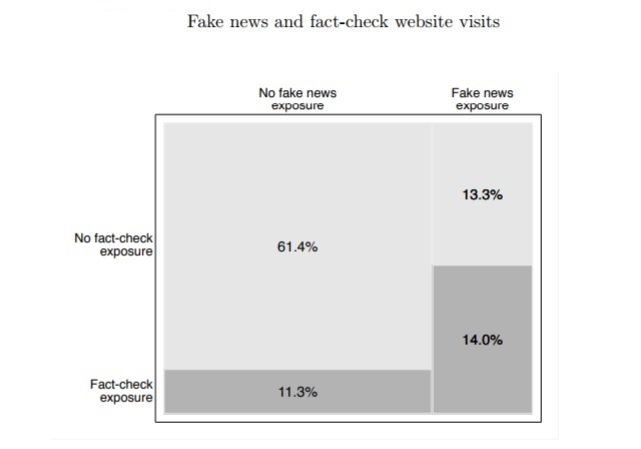 Fact checking is a current response to fake news. However, only one in four respondents said that they (25.3%) read a fact-checking article at least once from a dedicated national fact checking website. This is compounded by the fact that only 62% of the respondents say they are familiar with fact-checking. Importantly, the study found no instances of people reading a fake news article and a fact-check of that specific article. Consumption of fact-checks is concentrated among non-fake news consumers.

The research found the reach of fake news is wide yet narrow. Social media consumption offers consumers selective exposure of like-minded people and websites that reinforce personal and political biases. In other words, social media, specifically Facebook, offers a direct path to factually inaccurate but attitude-consistent information that reinforces their political views as theories of selective exposure predict.