Consumer appetite for content is going strong: Viewers watch 4 hours and 23 minutes on average per day. However, traditional TV viewing is declining while viewing of subscription video on demand (SVOD) services is growing. In fact, subscribing to a SVOD service is becoming the norm. Two-thirds of viewers now subscribe to at least one of the three big SVOD services (Netflix, Amazon, or Hulu). In fact, according to the Hub Entertainment Research Study, Decoding the Default, 38% of viewers subscribe to two or more of the “Big 3.”

Among SVOD subscribers, three-quarters report that Netflix was their first SVOD subscription. Currently 61% of viewers subscribe to Netflix, 36% to Amazon Prime, and 22% to Hulu. 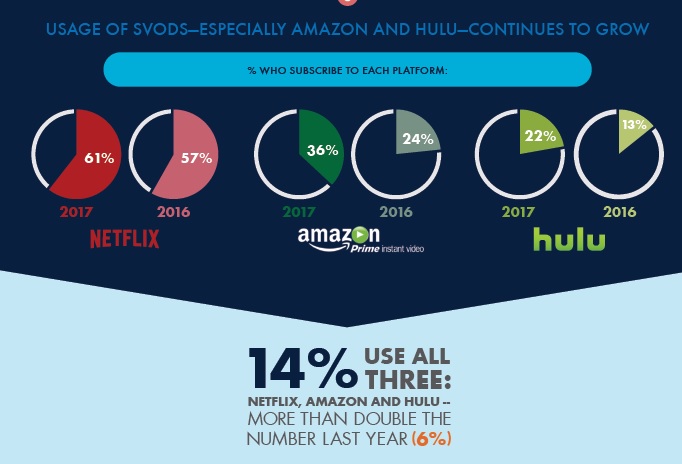 Consumers have multiple reasons for having more than one SVOD service:

Access to exclusive content is recognized as the key driver of SVOD subscriptions. Hub Entertainment Research identifies key consumer benefits for each platform.

Netflix appears to be the stickiest among those who default to Netflix. Just under two-thirds (63%) report they would drop other TV services before dropping Netflix. 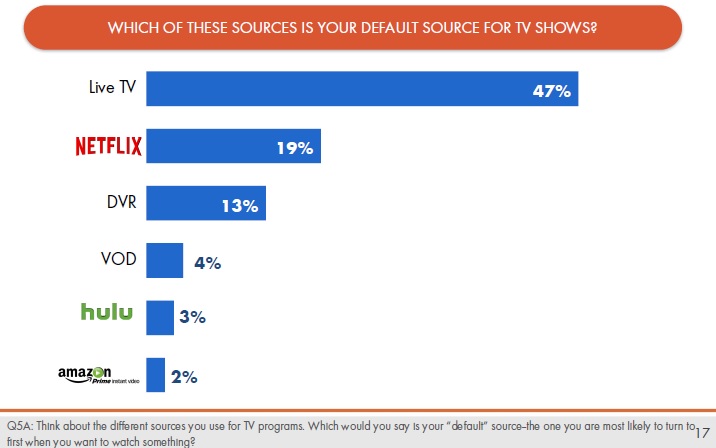 To address the SVOD adoption trend, broadcast and cable networks increasingly offer multiple episodes or complete seasons via video on demand (VOD) to encourage binge watching of new series. However, these efforts have found limited success.

SVOD offers both a social and an individual experience. This is important to attract younger audiences. The growth of OTT services is changing the television industry. It will be interesting to see how the market evolves. Key questions include what new strategies will emerge and how will viewership be monetized beyond subscription revenues Will it be advertising, advertising free, or advertising light?