Republicans and Democrats are more divided along ideological, educational, and generational lines than ever before. So, it’s no surprise that they trust and rely on different news sources. However, they also disagree on the news media’s purpose. Do news stories and analyses of current affairs help keep politicians honest or distract them from doing their jobs? 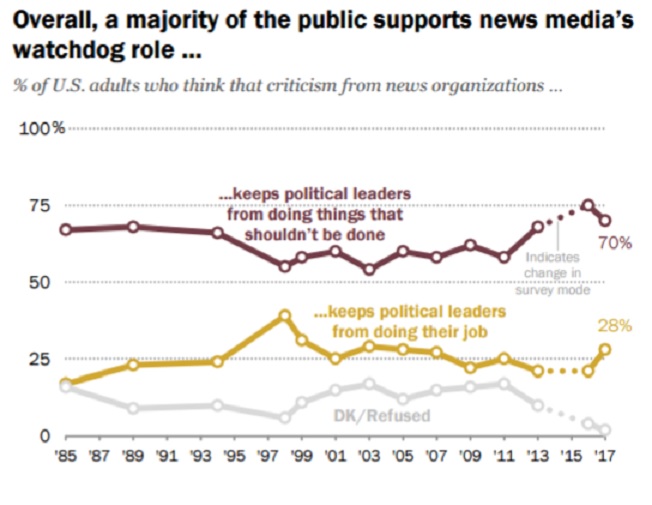 A new report from the Pew Research Center shows that 89% of Democrats say that the news media reports keeps political leaders in line, while only about 42% of Republicans say the same. That 47% gap, is significantly different from a year ago when roughly about three-quarters of both Democrats (74%) and Republicans (77%) backed the news media’s watchdog role.

In whom do we trust?

Americans are also paying closer attention to national news compared to 2016. Four-in-ten U.S. Adults report following national news very closely, up from one-third last year. Nearly three-quarters of Americans (72%) report that news organizations tend to support one side in presenting news on political and social issues. In contrast, only a little over one-quarter of digital news users think the news media deals fairly with all sides. Specifically, more than half of those identifying as Democrats (53%) report that the news media tends to favor one side compared to 87% of Republicans.

Pew’s trending data shows it’s not unusual for Americans who support the President’s political party to be less likely to support the watchdog role of media. Still, the current gap is far wider than at any prior point over the past three decades.

As overall mobile usage increased this year, so did news consumption on mobile, with almost half of U.S. adults (45%) getting their news often on a mobile device, a 9% increase from a year ago. Among those who get news on both mobile and desktop, nearly two-thirds (65%) prefer mobile access to digital news over desktop access.

Importantly, when judging if a news story is trustworthy, about half of U.S. adults say the source of the story (51%) and the story’s publisher (48%) have “a large impact” on the assessment, followed by a gut instinct (30%) and the person who shared (26%) the story.

The insights from this study are especially important to publishers whose digital content is progressively reaching readers outside their own websites and apps. A publisher’s commitment to quality content produces value for its readers. While this may not cross partisan lines, it provides an accurate and level-playing field to strengthen the trusted relationship publishers and reader.