Digital advertising will capture 77 cents of every new ad dollar this year and will surpass TV advertising in five additional countries, reports GroupM in its annual Interaction Report. Rob Norman, global chief digital officer and author of the report, addresses the value exchange between the user and the advertiser. Norman points to new revelations in today’s advertising model, “Attention is a reward not a right. Useful advertising is a function of relevance which in turn is a function of time, place, context, cognitive targeting and creation, and actionability.”

Once again, overall daily media usage grew by nine minutes in 2016, to a total of eight hours. Mobile and its many devices drove the increase with a 14-minute increase of time online. In this report, GroupM states that the 2017 forecast appears to be approaching a point of saturation. They see this period as a time of two distinct challenges: peak advertising and peak segmentation. Peak advertising refers to a state of reduced commercial interruption and peak segmentation is the point at which the value of user data cannot be converted in value. Both of these challenges can offset advertising results, for example when inefficient allocations counterbalance detailed targeting precision. 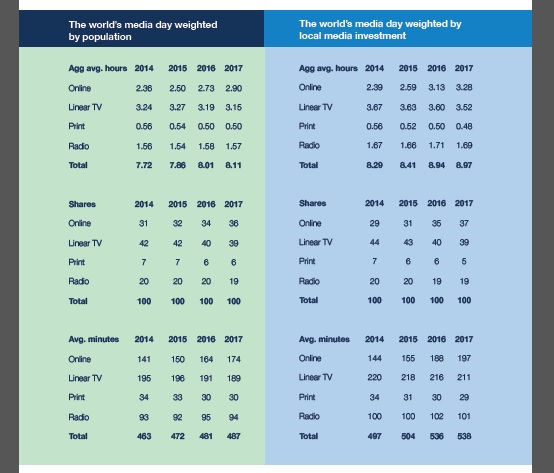 GroupM recommends that every brand have data and every brand have a data story. Without a data story, a brand lacks discovery, relevance and algorithmic referred platforms. Today there are also expectations of augmented reality and data overlays. Consumers expect brands to have a voice (which may soon be powered by artificial intelligence) to increase consumer interaction, both structured and unstructured.

Many market channels are experimenting with limited commercial interruption on a whole, or within individual programs. The thinking here is the less cluttered an environment, the higher the recall, the more an advertiser is willing to pay the premium that offsets the reduction in inventory. And further, the better the advertising, the more native to its environment, the even better and improved recall. This thinking warrants creative advertising content to be easily placed inside programming and network context.

Google/YouTube/Google Preferred want to change the idea of the “forced view” advertising television paradigm, which is the forced completion of a commercial. In contrast, Google’s TrueView counts viewing only after a video ad is clicked on or after completed viewing or viewing of the first 20 seconds. The video ad length has no limits, it can be longer than 30 or even 60 seconds and the advertiser only pays for the ads the consumers choose to watch.

Combining the viewership data with all of Google’s other data, provides a robust and detailed report of an opt-in view. Despite YouTube’s success, it has not achieved the watercooler moment of significant simultaneous reach. Consequently, YouTube is often used as a compliment to TV and not a replacement. Even Google Preferred, an aggregation of its highest quality content, has difficulty building scale. The impressions are often placed in questionable content causing marketers concerns.

Facebook’s video product is questionable as an advertising vehicle given unease with auto play and sound off. Unfortunately, the consumer’s news feed is now being populated by content that is not necessarily of interest. GroupM shares their Moat data which implies that for every 20 video ads served in the news feed, three are watched for three seconds or more and just one is watched for ten seconds or more. Facebook believes that even minimal exposure has value. However, advertisers need to factor into their own valuation of the platform’s performance to accurately reflect actual video ad consumption.

Facebook’s Live video inventory is familiar to the advertiser because the ad frame is content rather than just the user interface. These ads are initiated by the producer of the content with Facebook determining which ads are seen.

The challenge of measurement is huge with the need to identify and share who watched what, where, for how long and on what device. This is a necessary building block to assess ad and audience value.

A hybrid service combining on-demand and live linear television, called skinny bundles, has a number of strong players in the marketplace; AT&T, Turner, Google, Verizon, Hulu, CBS, Sony and Sling (Dish Network). The premise here is that consumers via their broadband connection can access a reduced channel line-up for a fraction of their original cable bill. The monetization of skinny bundles is based on subscription sales, highly targeted advertising (at a higher cost to marketers) minus the network transmission fees.

Spotify is an online on-demand music collection with the added the ability to find playlists from others, to customize your own and download music for offline listening. Spotify is generally recognized as the global market leader with 100 million users and 40 million subscribers. Pandora, on the other hand, is more about music discovery and a radio service. Pandora decodes music on hundreds of vectors and uses it to create custom “stations.” Pandora also launched an on-demand service (including offline downloads) bringing it closer Spotify’s model. Neither Pandora nor Spotify are profitable, as about 80% of their revenue is returned in royalties to artists and labels. Pandora and Spotify revenue models include subscriber fees and advertising revenue.

The merger of AOL and Verizon offer the world’s third largest aggregation of ad impressions with scaled “channels” in news, sports and finance, and significant ad tech assets and first party data from Yahoo Mail. While it may not challenge the duopoly of Google and Facebook, it could be, if executed properly, a strong offering for advertisers.

Twitter is a unique environment for brand video advertising and for brands to be an immediate and timely connection to consumers. While Twitter’s social significance is unquestioned, it still has not established itself as a profitable entity.

Snapchat has over 100 million users. It is the first of the internet mobile giants to offer a multimedia person-to-person communication experience. The Snapchat Lens is the most innovative digital ad product since the keyword and the news feed. It’s native to the platform and the ability to offer brand assets in user communication makes earned media that much more powerful.

Pinterest has approximately 150 million monthly users with approximately half residing in U.S. People use the platform to collect and share images. While often used by hobbyist, it also presents highly commercial and monetizable categories like fashion, food, design and crafts. Pinterest users “pins” (picture postings) of what they like and also learn about what they do not know much about from other user pins. This duality offers a unique advertising opportunity to reach different audience across the lower, mid and upper marketing funnel.

Facebook has more one billion people using it every day, Instagram has 600 million uses and Messenger and What’s App have another 1 billion users. Three to four of the 10 most used apps are operated by Facebook. Facebook Audience Network competes with Google’s GDN among mobile publishers. The company is video centric and this forces a dependency on content outside of their network. To date, new models and interfaces have not disrupted the duopoly or the dominance of these two players.

Technologies growth and advancement in both hardware and software is shifting market dynamics from the Information Age to the Intelligence Age. Today’s digital strategies must include plans to build a content destination that allows users to find, experience, share and buy and have the high probability for sharing and recommending.