The rapid spread of misinformation—better known these days as fake news—was named one of the top 10 dangers to society by the World Economic Forum in 2014. Powered by automation and algorithms, fake news is amplified more than ever on social media. In fact, orchestrators of fake news rely heavily on social media to create web traffic, drive engagement, and influence political views.

To understand the threat and impact of fake news, researchers at the Oxford Internet Institute (OII) studied 22 million tweets that contained hashtags related to politics leading up to the 2016 US Presidential Election. The research, “Junk News and Bots during the U.S. Election: What Were Michigan Voters Sharing Over Twitter?,” identified 138,686 users from Michigan, a battleground state evenly split between both presidential candidates, Clinton and Trump. The state of Michigan was specifically selected because the two presidential candidates were equally supported, limiting political biasness in the research. 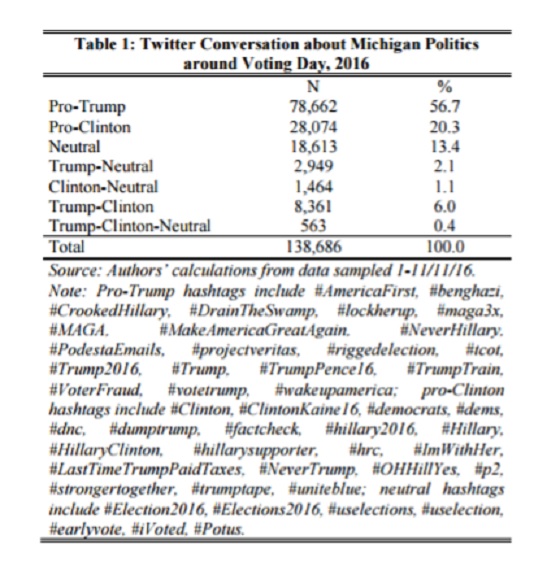 The Twitter data revealed that Trump-related traffic (57%) significantly outpaced Clinton-related traffic (20%) and neutral content (13%). Importantly, the research uncovered that professional news and fake news are close to a one-to-one ratio when it comes to political news tweets. Further, nearly a quarter of political tweets (23%) contain fake news links. and a full 47% of the political news content can be classified as political propaganda. Needless to say, social media’s proliferation of fake news is reason for concern.

Social platforms provide a fertile environment for the fast spread of fake without the necessary vetting and questioning of the information. Significantly, the Oxford Internet Institute defines “professional news” as that produced by major news brands. The information displays “the qualities of professional journalism, with fact-checking and credible standards of production. They provide clear information about real authors, editors, publishers and owners, and the content is clearly produced by an organization with a reputation for professional journalism.” And, while social platforms claim to be addressing the problem, premium publishers consider ensuring the accuracy of the information they report fundamental to their business so that they can deliver value to the reader and maintain consumer trust.