Almost one-third of respondents recalled at least one of a selection of fake news headlines from the election. In comparison, 57% of respondents recalled at least one of the real news headlines tested in the survey. Interestingly, consumers who identified themselves as Republican are more likely to think fake election news stories are very or somewhat accurate. Eight in 10 Republicans rated fake news headlines as accurate (among those they recognized), compared seven in 10 Democrats.

The fake news headline recalled by the largest number of respondents, 22%, is the story from the website the Denver Guardian, “FBI Agent Suspected in Hillary Email Leaks Found Dead in Apparent Murder-Suicide.” The highest awareness for a true news headline was at 34% of respondents for recalling Trump “absolutely” requiring Muslims to register.

One of the highest recalled true news headlines was the CBS News post-election story about Donald Trump stating he will not accept a presidential salary, “Donald Trump on Refusing Presidential Salary: ‘I’m Not Taking It.’” More than half of respondents (57%) recalled seeing this headline. Another news headline with a 90% accuracy rating, among the 157 respondents who recognized it, was the New York Times op-ed “I Ran the CIA. Now I’m Endorsing Hillary Clinton.”

Respondents rated the fake news story “FBI Director Comey Just Put a Trump Sign on His Front Lawn,” with the highest overall accuracy rating. Among the 186 people who recalled seeing it, 81% said it was very or somewhat accurate.

Consumers frequently see fake news in their social media feeds according to another survey on fake news conducted by Morning Consult, a media and technology. They found that amost one-third of respondents (31%) reported seeing a fake news story online more than once a day. Fifty-five percent of those surveyed said they started to read a story online only to realize it was fake. 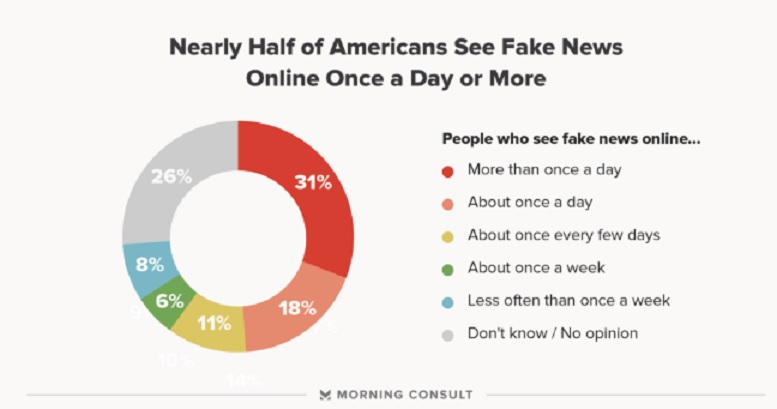 In terms of social platform usage, participants of the Ipsos survey cited Facebook as the most popular with just less than half (47%) visiting Facebook multiple times per day and another 15% report visiting once a day. YouTube was the second most popular social platform. Twenty percent stated they visit YouTube multiple times per day and 11% visit once a day. The fact that fake news headlines are often remembered and said to be accurate by a strong number of consumers points to the fact that consumers have a difficult time discerning between fact and fictional news on social media.