Mobile isn’t just causing a seachange in consumer behavior by increasing our demand for formats and features that are easy and enjoyable to access on smartphones and tablets. Mobile is also causing a seismic shift in advertising spend allocation, a surprise trend documented in the Zenith Advertising Expenditure Forecast released earlier this month.

The forecast, upgraded from numbers the company published in June, still expects mobile advertising to overtake desktop–but the new forecast predicts this will happen much sooner.

In fact, forecasts for mobile growth this year are upgraded from 46% to 48%, and next year from 29% to 33%. While it may only amount to a few percentage points, the impact on the total is tremendous. Zenith now expects mobile ad spend to exceed desktop by $8 billion in 2017, up from the $2 billion that was predicted in June. 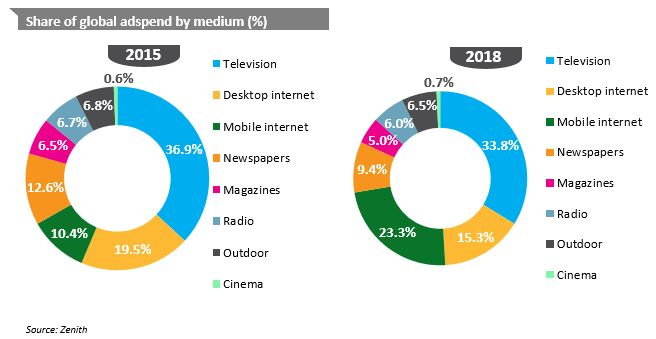 Overall, desktop is going to suffer a steep drop in 2017 – one from which it will not likely recover as Zenith further forecasts mobile to account for 60% of all internet advertising in 2018, up from it’s previous forecast of 58%.

Why is the shift to mobile causing desktop advertising to shrink faster than newspapers, magazines and TV? The answer is inextricably intertwined with consumer behavior and people’s preference for experience over interruption.

At one level, mobile ad spend is merely following the trajectory it must if brands and marketers are determined to be where their customers are. People are spending more time on mobile devices, so ad dollars must follow. This brings us back to the most “clipped” slide in the annual Mobile Internet Trends Report deck from Mary Meeker, Internet guru and partner at venture capital fund Kleiner Perkins Caufiled & Byers. In it Meeker pointed out the gap between time spend on media (specifically mobile) and percentage of media spend. 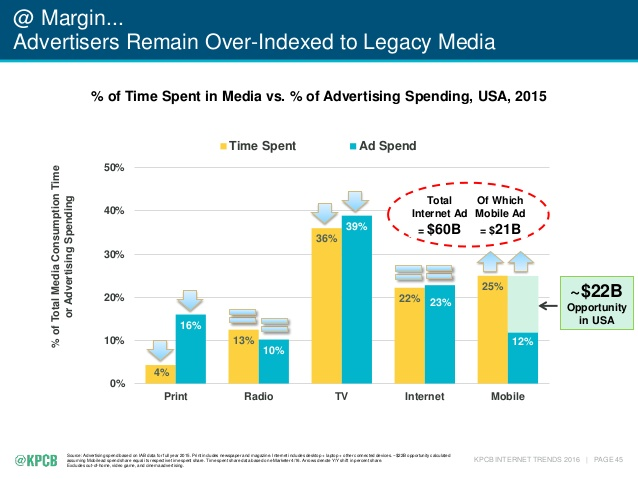 But the exodus of ad spend is also fueled by the hard truth that consumers are annoyed by banner ads, and reaching in increasing numbers to ad blockers in order to tune out interruptive display advertising on desktop (as well as mobile).

Another driver causing the rapid decline of desktop ad spend in no doubt the surge in social media and native advertising. Reams of research and campaign results shows social and mobile is an unbeatable combination–particularly since social media is a perfect fit with the fiercely personal nature of our mobile devices and aligned with how we spend the majority of our time on mobile (namely, engaging in social media conversations and the contextual ads that show up in our feeds).

Mobile is where we focus our time and attention, so it makes business sense for ad spend to shift to our “first” screen. However, the rise in mobile spend doesn’t mean the death of desktop. Zenith is bullish about the outlook for other desktop formats such as video, a format that it notes has “benefited from the transition to programmatic buying, which allows agencies to target audiences more efficiently and more effectively, with personalized creative.”

In a world where experience trumps–well– everything, all ad formats can count on being a line on the budget as long as they are highly engaging, not annoying, and highly relevant.